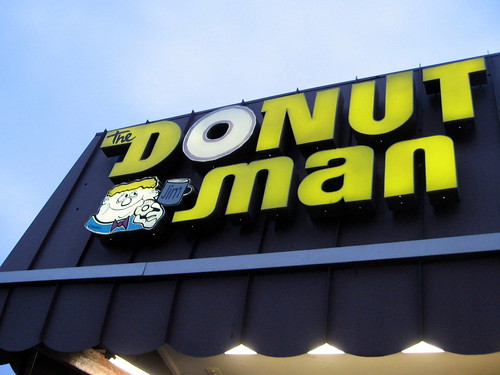 I was tempted to drive 18 miles out to Glendora to celebrate National Donut Day with The Donut Man, but decided to take the homemade route and prepare cinnamon sugar donuts from scratch instead. As much as I love sampling new foods in out-of-the-way locales, in order to justify the drive and traffic, I like to pair it with a non-food related activity. Donuts for the sake of donuts wasn’t enough of a draw to get me behind the wheel, even if said donuts were crafted by the famous Donut Man.

Fortunately, The Astronomer and I attended a Camera Obscura show the following week at The Glass House in Pomona, which provided the perfect opportunity to swing by Glendora. Score! Nothing gets me pumped up for an indie rock show like some plump and sugary donuts. 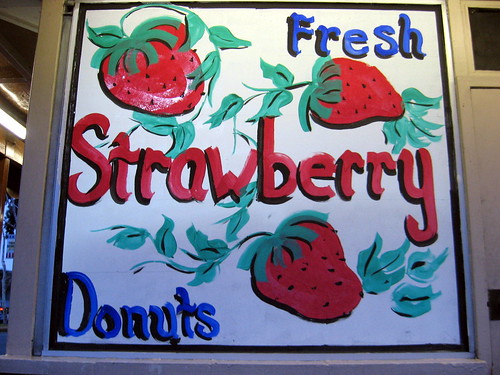 The 24-hour Donut Man operation was founded by Japanese-American Jim Nakano in the 1970s. A native Californian, Nakano purchased the shop with his wife Miyoko shortly after they married and settled in Glendora. In addition to churning out the usual maple bars, glazed twists, and French crullers, The Donut Man offers fresh fruit donuts that are the talk of the town. His strawberry and peach creations have been known to inspire donut fanatics to drive hundreds of miles for a fix. 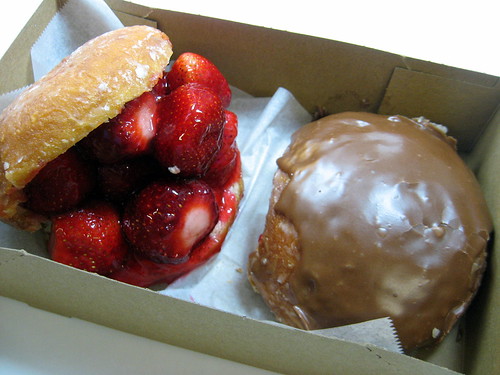 Due to The Donut Man’s immense popularity, fresh donuts are made constantly throughout the day. In fact, when we arrived on the scene after 8 PM, the bakers in the back were frying up a big batch of crullers.

From the selection on hand, The Astronomer and I ordered a fresh strawberry donut ($2.75) and a Bavarian cream donut ($1.30). We placed and received our order at the front window. 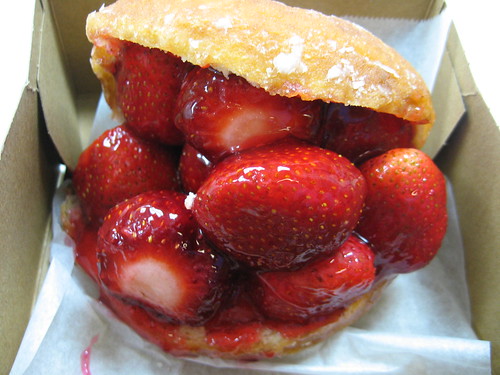 Our initial plan was to consume our donuts in the car, but one glance at the strawberry monstrosity before us and we quickly changed our minds. The Astronomer and I settled into a bench near the front window to dig in.

Even with my larger than average mouth, I found it impossible to bite the donut cleanly from top to bottom. Rather than risk soiling my concert-wear, I used a fork to prick the strawberries and my fingers to pluck a piece of the donut.

The strawberries, which were coated in a fruity glaze, were abundant, firm, and ripe. The donut tasted like a standard glazed donut. The combination of fresh fruit and sweetened fried dough was very appealing. I wouldn’t hesitate to stop by for another if I happened to be in the neighborhood. 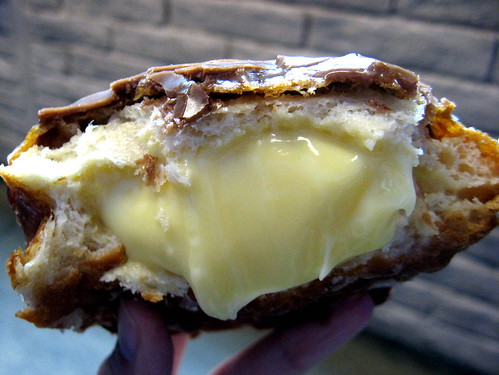 Photos from the Agent Ribbons and Camera Obsucra show after the jump. Agent Ribbons—One guitarist/singer, one violinist, one drummer, and one bird-mask donning tambourine player. Camera Obscura—Even though the band was rocking, you better believe the crowd was standing still.

19 thoughts on “The Donut Man – Glendora”