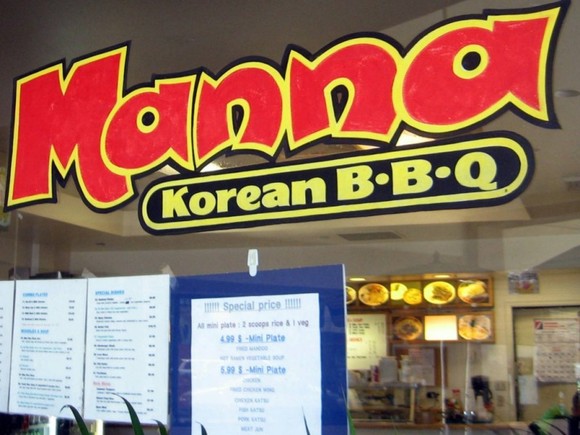 There is nothing sexier on this planet than a woman wearing a bikini after she has downed a Hawaiian plate lunch.  Well, that’s sort of a lie, but I kept repeating it to myself like a mantra during my week-long trip to The Big Island. It takes a real woman to eat local-style grindz and then hit the beach two shakes of a lamb’s tail later.

After picking up my Honolulu-dwelling friend Luscious Liana from Kona International, we drove to Kailua Kona in search of lunchtime grindz. [Warning: ‘Grindz’ is my current favorite word and will be used and abused excessively for the next couple of posts.] Plan A was to hit up Kona Mixed Plate, but unfortunately it was closed due to the Fourth of July holiday. Plan B entailed driving from strip mall to strip mall until proper grindz were located. Manna Korean BBQ fit the bill. 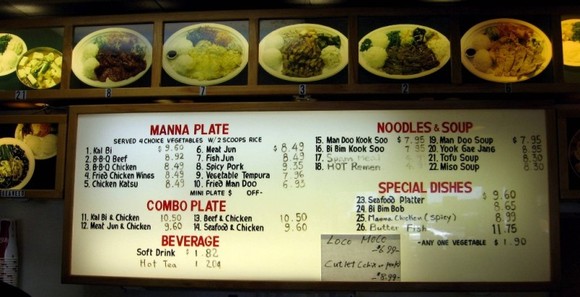 From my haole point of view, local-style grindz are a fusion of Asian cuisines with processed American fare—an Asian-American amalgam, if you will. Manna’s menu is heavy on Korean offerings and includes Hawaiian standbys like macaroni salad, loco moco, and Spam. 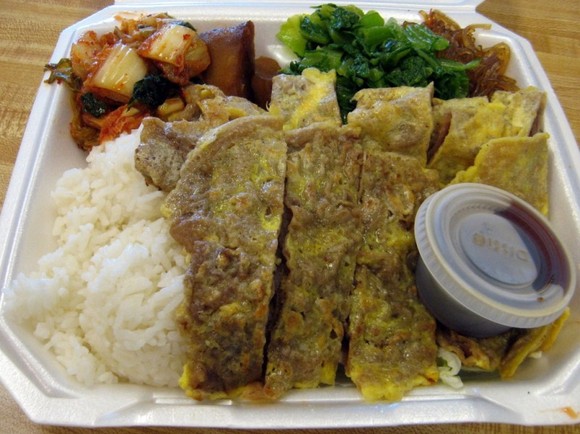 Luscious Liana navigated Manna’s menu like a true local. Unlike her clueless tourist companions, who were hemming and hawing over the available options, she knew exactly what she wanted—Meat Jun ($8.49).  Meat jun, also known as Chen-Ya in Korean, consists of thinly sliced pieces of “teri” beef dredged in a flour and egg mixture and fried. It was served with a sweet shoyu sauce on the side. Lush’s Manna Plate also included four vegetables and two scoops of rice. For her veggies, she chose kimchi, shoyu potatoes, steamed greens, and japchae.

Being the generous friend that she is, Lush allowed me try everything in her box. I went for the meat jun first, which had a very homey, sweet, and satisfying quality to it. I was surprised by how thinly sliced the meat was and how the batter didn’t adhere to the meat at all. The tastiest side item were the potatoes, followed by the japchae. 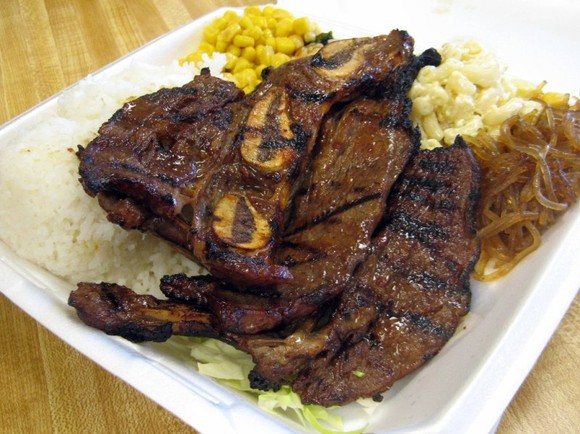 My cousin Brian ordered the Kal Bi Manna Plate with canned corn, mac salad, japchae, and kimchi on the side ($9.60). 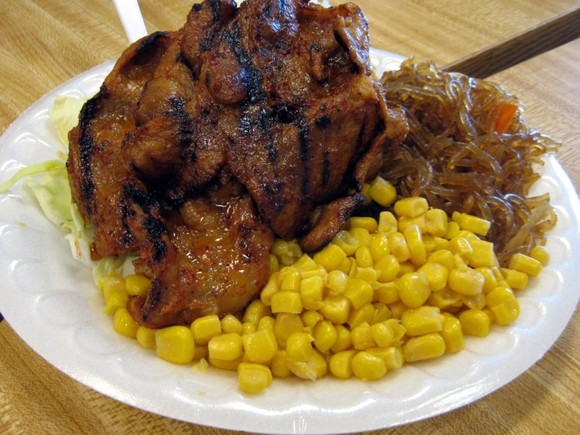 My cousin Andrew ordered a mini-plate with spicy pork, japchae, and canned corn ($6.99). Both the spicy pork and the kalbi were very well-seasoned, not too fatty, and arrived fresh off the grill. 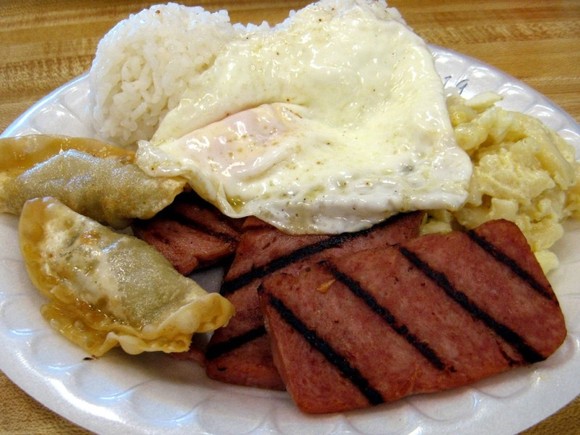 Although I was tempted by the loco moco, I decided to ease my way into Hawaiian food with a Spam Plate ($4.99). In addition to the four slices of grilled spam, the plate included a scoop of mac salad, a scoop of rice, a fried egg, and two fried mandu (Korean dumplings).

From afar, this plate may look like a big ‘ol confusing mess, but I can assure you that every element tasted great and made perfect sense at the time. The salty Spam and creamy mac salad paired extraordinarily well together, while the oily mandu ruled when dipped in gochujang (Korean fermented hot pepper paste). I have a special place in my heart for plate lunches. 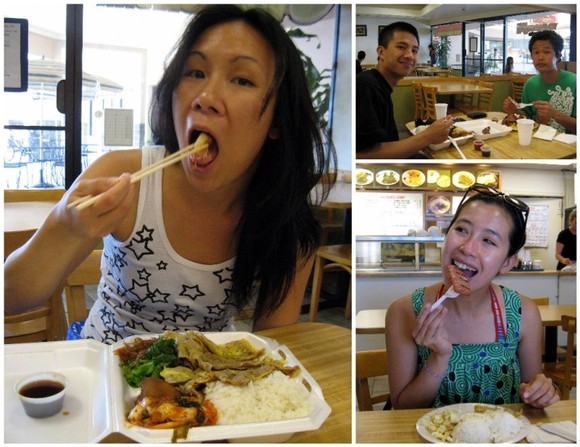