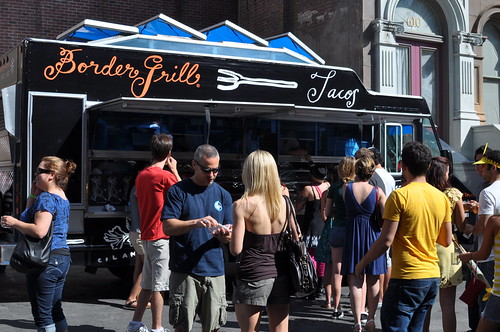 The meals on wheels movement has made it possible for ordinary people and aspiring restaurateurs to introduce new culinary concepts during a down economy thanks to lower start-up costs and seemingly endless demand. Whereas the bulk of roach coaches crisscrossing the city, including Cool Haus and Dosa Truck, were launched by amateurs with little or no prior restaurant experience, the Border Grill Truck is the product of seasoned veteran chefs Mary Sue Milliken and Susan Feniger.

Based on their successful Border Grill restaurants in Santa Monica and Las Vegas, the mobile effort serves up Mexican tacos, quesadillas, and ceviches made with modern flare. From efficient service to thoughtful presentation and solid food, it’s clear that the truck has benefited tremendously from its brick and mortar roots. While it’s admittedly silly to compare a professional product to those of novices, I can’t help but declare the Border Grill Truck the king of the roach coaches. For goodness sake, they offer appetizers, entrees, and dessert! 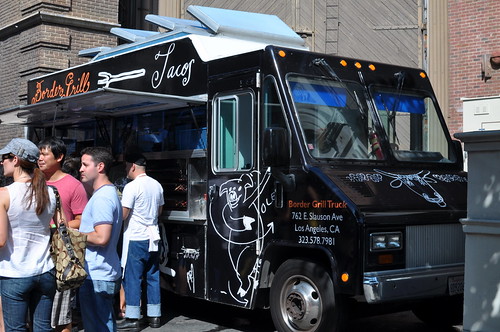 The Astronomer and I bumped into the Border Grill Truck while getting our drink on at this year’s Septemberfest at Paramount Studios. The line was ten deep when we pulled up, but it was only a matter of minutes before it was our turn.

Our order was taken by an apron-donning man standing outside the truck. After scribbling our wishes down on his pad, he handed The Astronomer a ticket. After presenting our ticket and payment to the expediter, we scooted to the left window for pick-up. Our food was ready soon after. 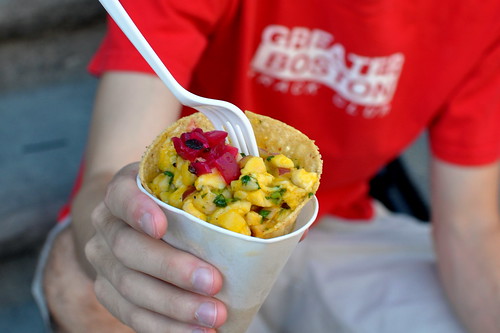 The Border Grill Truck churns out good looking eats complete with colorful garnishes and sturdy containers. We started with a Peruvian ceviche made with mahi mahi, lime juice, ginger, aji amarillo chile, and pickled onions, all in a corn tortilla cone ($5). The fish was pleasantly tart and tasted very fresh. The tortilla cone bordered on stale, but still managed to provide a fitting textural contrast to the ceviche. 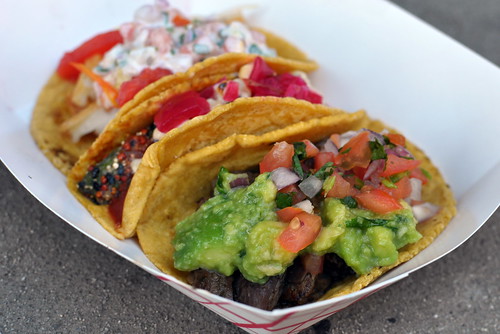 For The Astronomer’s main entree, he dug into a carne asada taco with caramelized onions, salsa fresca, and guacamole ($3). I had the awesome task of eating all of the guacamole because The Astronomer’s not too keen on avocados. The large hunks of avocado were buttery and smooth; my boy doesn’t know what he’s missing out on.

According to The Astronomer, the taco sans guac was a solid effort. The meat wasn’t particularly tender or any more special than other mobile taco experiences, but the complete package was flavorful, well portioned, and tasty. 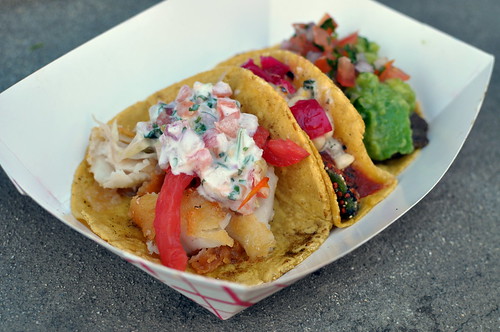 I couldn’t choose between the Baja fish taco ($3) and the avocado taco ($2.50), so I ordered them both. The fish taco, which was served with chipotle honey and a creamy salsa fresca, was deliciously different from other fish tacos I’ve tasted. The thinly battered fish nuggets worked well with the creamy fixins, even though it was a mess to eat.

The avocado taco with chipotle salsa, creamy corn relish, and pickled onions was a very satisfying vegetarian option. Each of the ingredients was bursting with freshness and flavor. 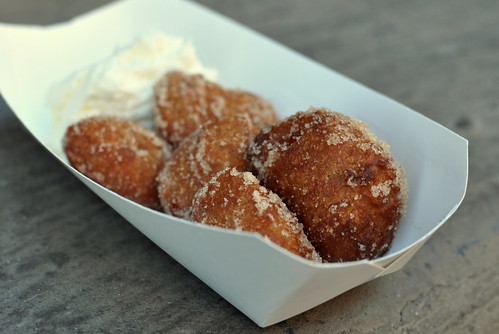 For dessert, we shared an order of dulce de leche-infused churro bites ($3). The churros were deep-fried to order and arrived finger-scorching hot. Whereas traditional churros are innards-less, these were doughy and gooey with caramel. Swiped in a bit of cool whipped cream, the cinnamon- and sugar-coated churros were muy excelente. 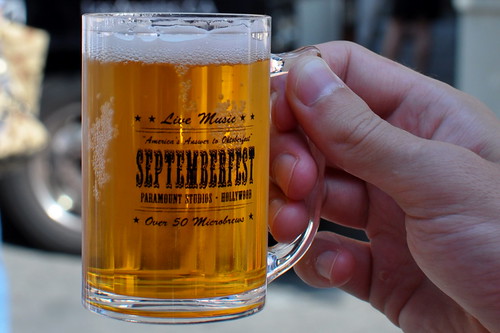 After lunching at the Border Grill Truck, we were ready to drink our weight in beer and cider. Bottoms up!