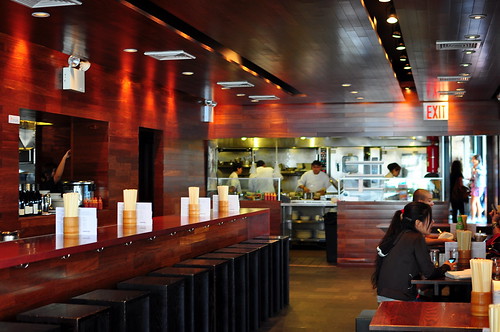 I would’ve never guessed back in 2006 when my brother introduced me to Momofuku Noodle Bar that chef David Chang would eventually mastermind a lucky peach empire. Built largely on ramen, pork buns, and uncomfortable wooden stools, the Momofication of the East Village is currently four restaurants strong. In addition to the original Noodle Bar, Chang also operates Momofuku Ssäm Bar, Momofuku Milk Bar, and Momofuku Ko. Another yet-to-be-named Momofuku establishment is slated to open in Midtown at the Chambers Hotel later this year.

The Astronomer and I managed to hit up two of Chang’s restaurants during our week-long jaunt to New York City. We toyed with the idea of dining at Ko, but found the reservation policy overly demanding and decided to leave that leaf unturned for the time being. 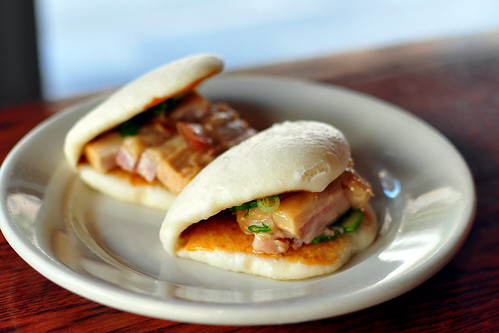 In between a late breakfast at Russ and Daughters and a farmers feast at Blue Hill, The Astronomer and I stopped into Ssäm Bar for a snack. Ssäm, according to the restaurant’s FAQ page, is “anything that is encircled or wrapped.” We started with an order of the steamed pork buns ($9), a dish so desirable that it is available at every single Momofuku location. 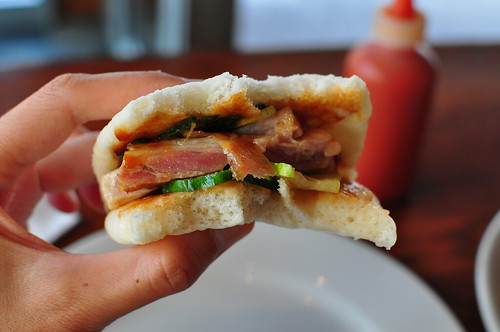 Served warm, the duo of buns were lacquered with hoisin sauce and stuffed with pork belly, slivers of cucumbers, and scallions. The first time I tasted Chang’s now infamous buns, pork belly was still widely considered a lesser meat. Now that this fatty bit has properly integrated onto restaurant menus from coast to coast, the buns have lost some of their decadent luster. The pork buns were still damn tasty, but slightly less swoon-inducing due to the belly’s ubiquitous presence elsewhere. 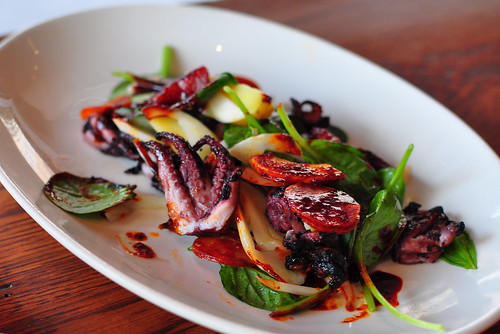 For our second plate, The Astronomer chose the grilled baby octopus with chorizo, pickled fennel, potatoes, and piperade oil ($15). Whenever octopus is available on a menu, my boy cannot help himself. The overly charred octopus set a harsh tone that the more delicately flavored ingredients could not overcome. Although I wanted to order a third dish to make up for the eight-legged flop, we were due at Blue Hill in a few short hours, so we left Ssäm with a slightly burnt taste in our mouths. Shucks.