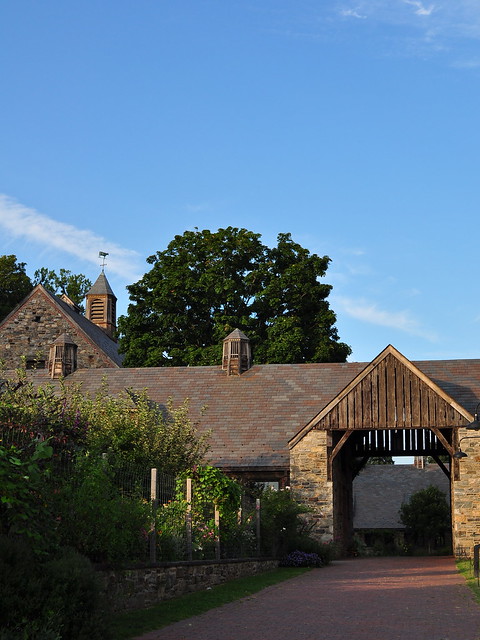 The intelligence and passion that Chef Dan Barber exuded during his twenty-minute presentation on “natural” foie gras at the Taste3 conference inspired The Astronomer and me to seek out a meal at Blue Hill at Stone Barns during a week-long trip to New York. Situated on a working four-season farm, Chef Barber’s five-year-old restaurant is dedicated to creating a consciousness about the effects of everyday food choices. After exploring the farm’s magnificent grounds and learning about its mission, The Astronomer and I were ready to sit down and experience how a principled approach to food translated onto the plate. 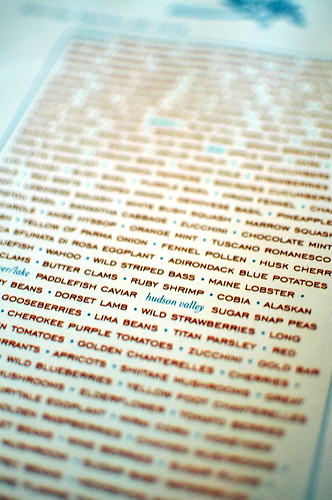 Sourcing from the surrounding fields and pastures, as well as other local farms, Blue Hill highlights the abundant resources of the Hudson Valley. Upon being seated, diners are presented with a list of over a hundred ingredients containing seasonal offerings from the field and market. During our visit in early September, items such as Samantha cabbage, Socrates cucumber, lobster mushroom, and Aztec beans were on the “menu.” The only decision diners make is choosing between the five-course tasting ($105) and the Farmer’s Feast ($135). To experience the full range of the kitchen’s abilities and the season’s bounty, The Astronomer and I chose the Farmer’s Feast. 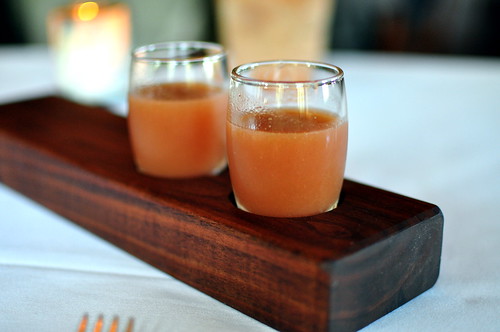 Shortly after deciding to feast rather than taste, we were bombarded by a parade of amuses. In the span of ten or so minutes, seven different bites appeared at our table, leaving us feeling simultaneously overwhelmed and giddy. First up were two V8 shooters. Served slightly chilled, the juice provided a refreshing start and readied our bellies for more. 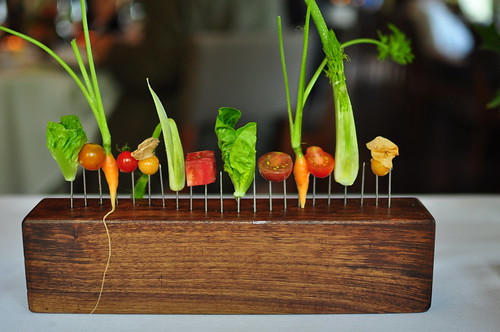 Next to arrive was a most delightful “fence” of dewy vegetables. The artful presentation reminded me of Martin Kastner’s thoroughly modern tableware designs for Alinea in Chicago. We relished plucking each tomato (Jaune Flamme, Sungold, Magic Mountain), lettuce, carrot, and fennel with our bare fingers and popping them into our mouths. The Astronomer couldn’t get enough of the licorice-laced fennel, while I was enamored by the impossibly sweet yellow Husk tomatoes. 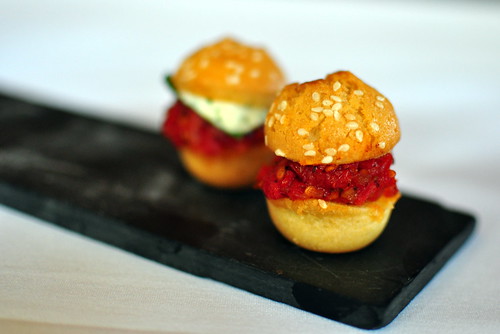 My favorite of the amuses were the bite-sized tomato burgers. The semi-sweet buns had an airy texture reminiscent of macarons, while the heart of the burger tasted intensely vibrant, like tricked-out sun-dried tomatoes. I happily polished off both burgers because The Astronomer loathes tomatoes. Our waiter informed us that during the winter months, beets are used in place of tomatoes in this dish. 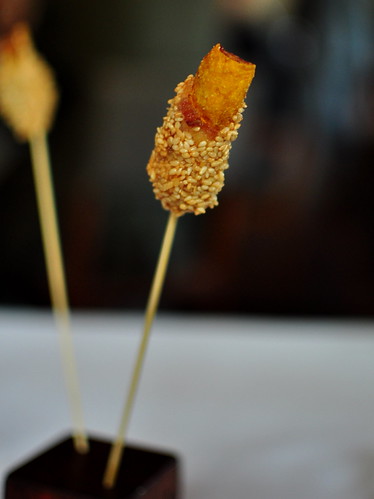 Perched atop wooden skewers were hunks of yellow summer squash encrusted with pancetta and sesame seeds. In contrast to our earlier bites, this one was warm and mostly savory. 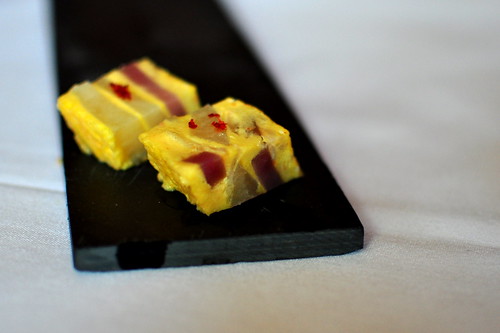 Frittatas made from the eggs of Rhode Island red hens arrived on a charcoal slate. In between the soft eggy curds were layers of potatoes and salty pancetta. 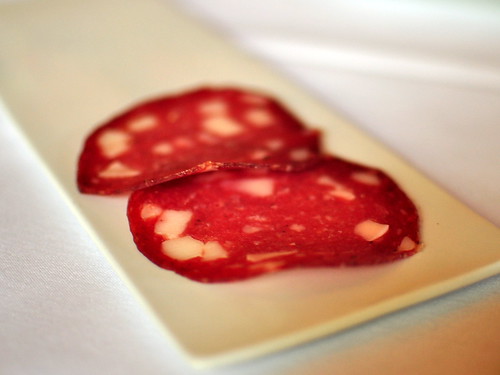 The squares of perfectly white fat nestled in the slices Berkshire pork were downright silky. 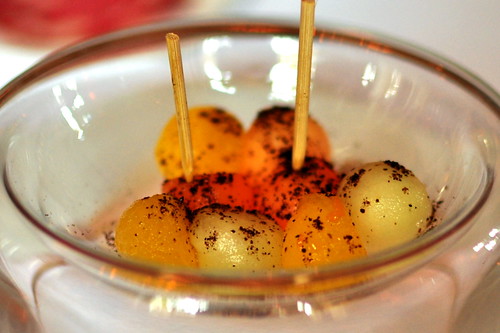 The final amuse was an array of melons sprinkled with ground black pepper. The colorful collection of spheres included honeydew, cantaloupe, and yellow and red watermelon. The interplay between sweet, spicy, and juicy was a treat for the senses. 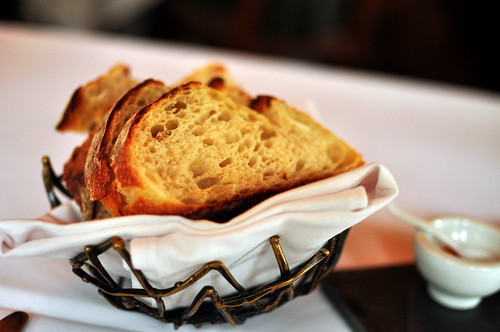 Following the slew of unique amuses, we were served slices of caramelized onion potato bread. On the side were little bowls filled with tomato salt, ricotta, and butter. Both the cheese and butter were made using milk from Blue Hill Farm. I weighed down my already delicious bread with a combination of runny ricotta and a light sprinkling of tomato salt. 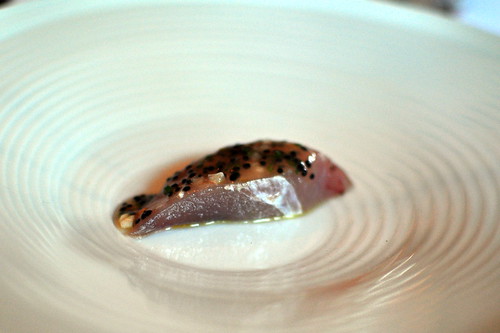 The first official course of the evening was a slab of fresh blue fish dressed in caviar and a pigs ear vinaigrette. The naturally chewy pig ear imparted a subtly gelatinous texture to the vinaigrette. 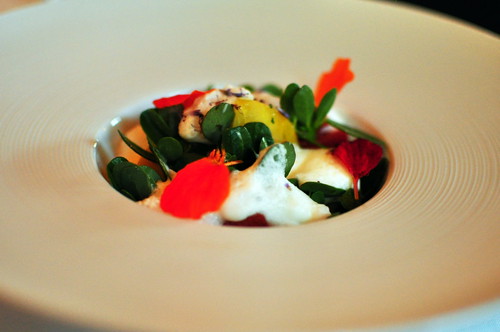 Due to The Astronomer’s aversion to tomatoes, the kitchen fixed two different summer salads for the second course. My salad contained tomatoes and watermelon topped with balsamic vinegar and a yogurt foam. The simple accouterments highlighted the sweet and juicy perfection of the tomatoes and watermelons. I don’t think I’ve ever enjoyed a vegetable course more. 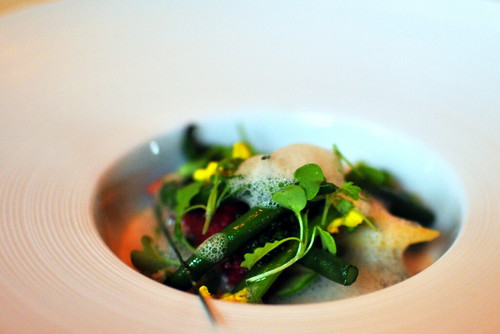 The Astronomer’s warm summer salad was a verdant collection of green beans, zucchini, and broccoli florets accented with an eggplant dressing and foam. To say that The Astronomer loved this dish would be an understatement, he practically inhaled it. 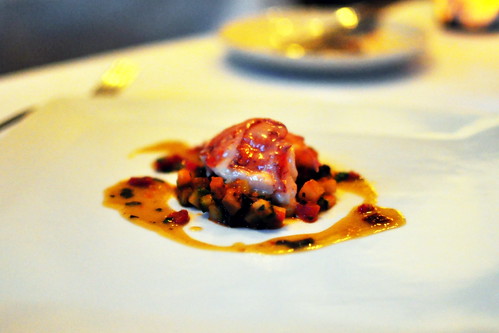 The strongest dish of the night was the butter-poached Maine lobster served with members of the “night shade” family including tomatoes, peppers, and eggplants. With each forkful, I closed my eyes and blocked out the entire dining room in order to taste the sweet and tender lobster without distractions. As with all foods that are heartbreakingly good, this tail disappeared much too soon. 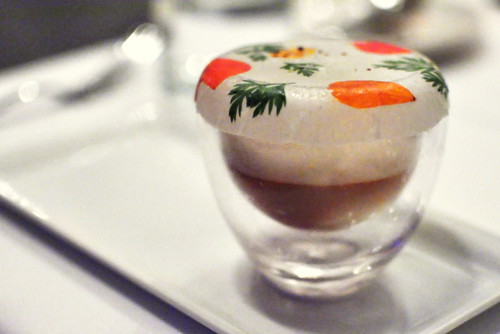 It is a difficult task following up a perfectly executed lobster, but this special egg preparation was up to the challenge. Beneath the edible herb- and petal-embedded rice paper was a warm farm fresh egg, softly cooked, and paired with tomatoes and eggplants. The rich egg yolk coated the vegetables and flavored the dish simply and beautifully. 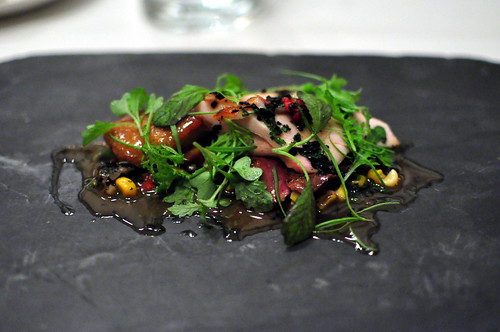 The egg dish was appropriately followed by a chicken preparation. I must admit that my heart sank a little when our waitress announced this course. On my list of favorite animals to eat, chicken lies somewhere near the bottom along with field mouse. I needn’t have worried because the chicken was nothing short of fabulous. Moist and tender pieces of light and dark meat shared the slate with corn and okra. The most memorable components of the dish were the two slices of rare liver. Accustomed to liver that is bitter in taste and unpleasantly grainy in texture, I was taken aback by the succulence of this version. Raw offals are the new black. 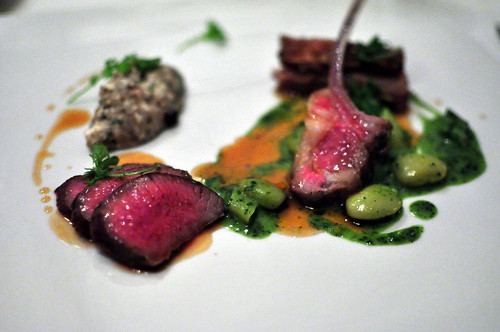 After witnessing herds of sheep gorging upon the grassy hills outside the restaurant, The Astronomer and I sinisterly and secretly hoped that we’d be served lamb for dinner. Sure enough, the final savory course of the evening was Dorset lamb. We were spoiled with three different parts—loin, rack, and my favorite, belly. A coarse puree of eggplant, cheese, carrots, and pine nuts rounded out the dish. 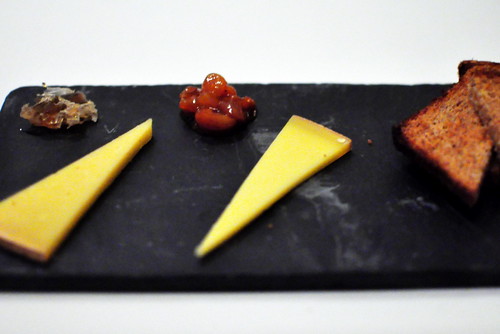 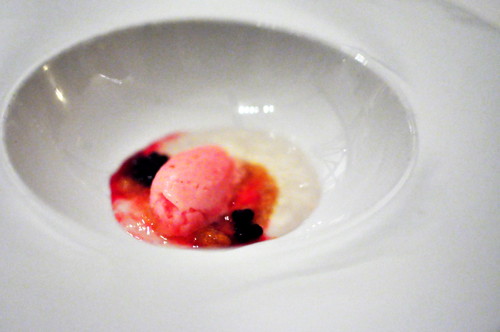 Following the cheeses was an apricot and elderberry flower sorbet. The various tart gelée underneath the sorbet added a little something extra to the refreshing palate cleanser. 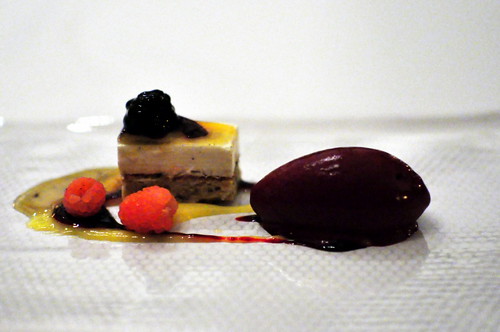 For dessert: a perfectly summery fromage blanc cake with fresh blackberries and yellow raspberries. The blackberry sorbet swathed in the trio of sauces (honey, vanilla, and guava) really made this dessert for me. 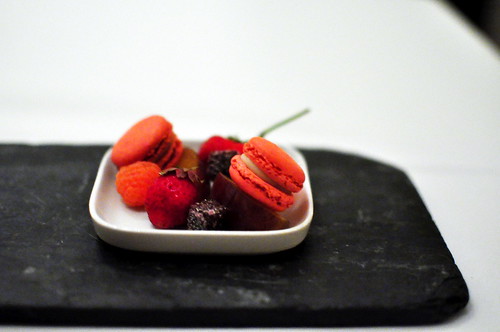 As a disciple of both Michal Pollan and Marion Nestle, I’ve long internalized the rhetoric that food produced using natural and environmentally sound methods tastes better and is better for us. However, as a city dweller who isn’t on a first name basis with her local farmers, I’ve based my trust in this fact on principle rather than actual experiences. From the glorious amuses to the berry-licious finishes, the Farmer’s Feast at Blue Hill drove the message home. Grow well. Buy well. Eat well. Live well.