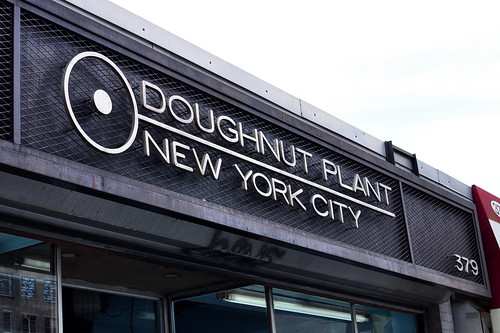 Doughnut Plant was on the itinerary for our spring 2007 New York City food tour, but due to its odd hours of business, The Astronomer and I left the city without doughnuts in our gullets. We were bummed out at the time, but not incredibly so because we managed to eat at seven different places in 36-hours during that short trip. We knew we’d be back at a later date, and hoped that Doughnut Plant would still be around for us to have a taste. 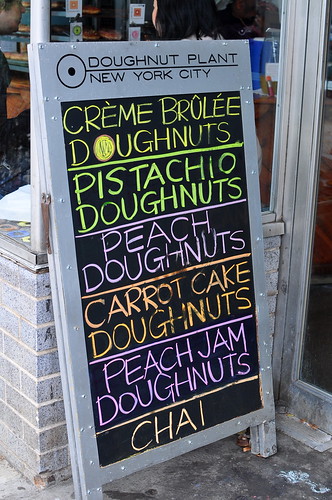 Two years later, Doughnut Plant sits largely unchanged on Grand Street in the growing-cooler-by-the-minute Lower East Side. The tiny shop has been given a fresh coat of paint and the once bare walls are now lined with blown-up press clippings. 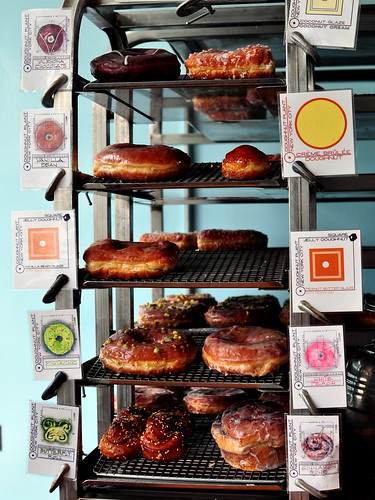 What initially brought me to Doughnut Plant were its trans-fat free doughnuts. In the early days of the trans-fats are more evil than communism movement, it was widely believed that hydrogenated oils were absolutely essential to producing a light and airy doughnut. When I read about Doughnut Plant’s superior-tasting, trans-fat free products, I was curious to see how they measured up to their hydrogenated counterparts. While I’m not nearly as vigilant about trans-fats as I was two years ago, Doughnut Plant’s significant breakthroughs and creative innovations in the field of doughnut making merited a return visit. 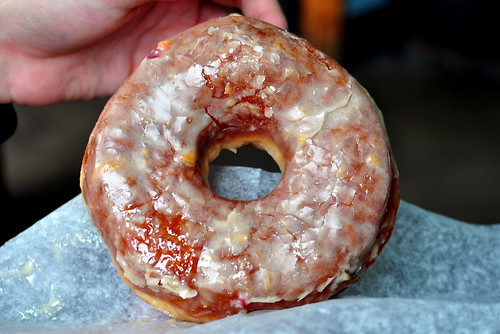 After browsing the drool-inducing selection, The Astronomer chose a white peach doughnut ($2.25)—one of the seasonal offerings available. The doughnut looked ordinary on the outside, but its texture and flavor were extra special. The batter contained bits of actual fruit, which imparted a mild peachy undertone throughout the doughnut. The doughnut’s texture was so delicate that it nearly folded in half when The Astronomer went in for his first bite. 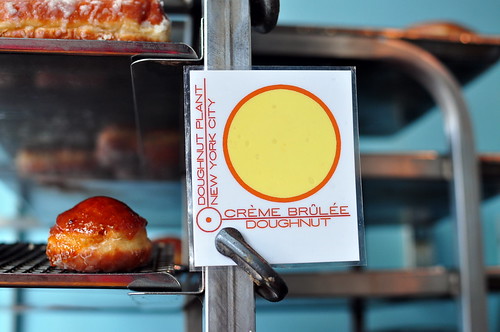 With so many delicious choices, it was difficult for me to pick just one. I eventually settled on the crème brûlée doughnut ($2.75) because cream-filled doughnuts are my favorite. 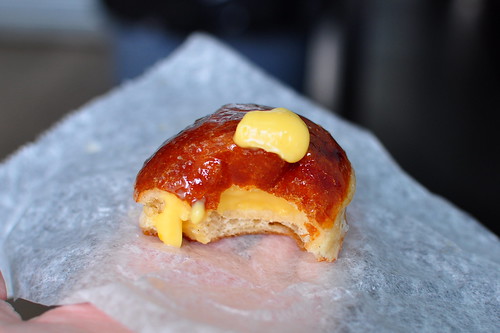 The palm-sized sweet was piped full of smooth vanilla cream and topped with caramelized sugar, blow-torched to perfection. Trans-fat free or not, crème brûlée in doughnut form is just plain brilliant.