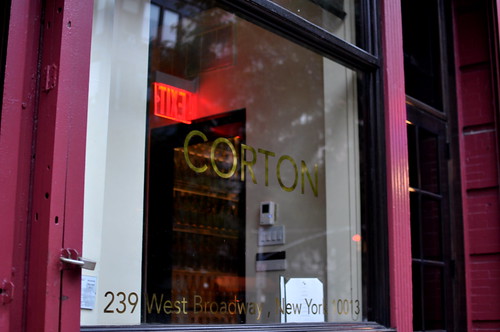 My brother has averaged a visit a month to Corton since its doors opened last October. With endless dining options at his fingertips, my brother insists on returning here time and again because the food is phenomenal, the menu is constantly evolving, and the value is superb. Plus, being a regular has its perks. Although he’d prefer to keep Corton a secret, my brother is not alone in his affections. Frank Bruni dolled out three stars last December in the New York Times and most recently, Corton received two stars from the Michelin Guide in its 2010 edition.

My brother treated The Astronomer and me to dinner at Corton during our week-long stay in New York. Arriving earlier than our dining mates, we grabbed two seats at the bar. I sipped a very potent Spencer (Cîroc vodka, Lillet, grapefruit juice, candied grapefruit), while The Astronomer drank an extremely manly Brazilian Breeze (Leblon Cachaça, pineapple, pomegranate). Both cocktails were $15.

As soon as I whipped out my camera to take happy snaps of our brilliantly-made adult beverages, the maître d’ swooped in to inform me that the restaurant has a no-photo policy. In my three years of covering restaurants on gas•tron•o•my, I have never encountered a situation like this before. I was mildly sad that I wouldn’t be able to share plate-by-plate details of the meal with the Internet, but excited to dine like a normal person for the first time in years! You win some, you lose some. 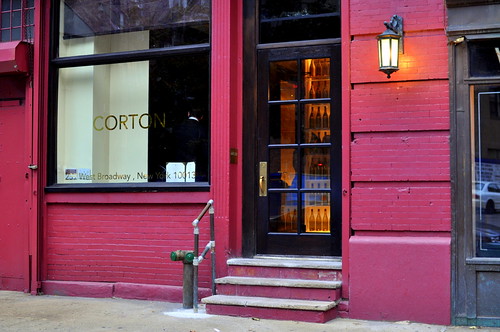 Corton offers a three-course prix fixe menu ($85), as well as a chef’s tasting menu ($135). My tablemates and I chose the three-course affair. We began our feast with two canapes and bread service. The first canape consisted of a bagel adorned with egg, caviar, and flecks of gold leaf, while the second one was a luscious foie gras mousse with tomatoes. The highlight of the bread service were the thin and crispy raisin toasts swathed in seaweed butter.

My foie gras appetizer with sour cherries, Chioggia beet, and Cataluña spice was sublimely executed. The preparation was so fantastic that it rivaled The French Laundry’s. If the torchon had been accompanied by luxurious slices of toasted and buttered brioche rather than ordinary toast points, Corton would’ve nudged ahead.

My entree of Maine lobster with heirloom beets, Parmesan crumble, and Bergamot orange ($6 supplement) wasn’t as life-affirming as the one I’d eaten the evening prior at Blue Hill, but seriously solid nevertheless. The hunk of tail was accompanied by succulent lobster knuckles.

What sets Chef Liebrandt’s style of cuisine apart from the fine dining pack are his “side dishes.” Two or more of these artfully plated flourishes accompany almost every appetizer, entree, and dessert. At times all of the different bowls and plates could barely fit on our tabletop. The Chef also likes to add various finishing touches, like pouring sauces and foams, right as the plate lands at the table. 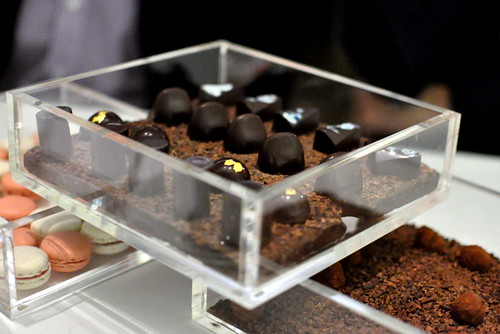 When the mignardises arrived, my brother dared me to disobey the restaurant’s wishes and snap away. Corton’s selection of mignardises—handmade chocolates, truffles, and macarons—were some of the best I’ve ever encountered. Each delicate nibble was a thoughtful and delicious creation.

One of the perks of being a regular is not having to be modest. Restaurant Director Arleene Oconitrillo left the trays of beautiful mignardises at our table so that we wouldn’t have to choose which of the four different chocolates to indulge in. We could have them all! And we did.