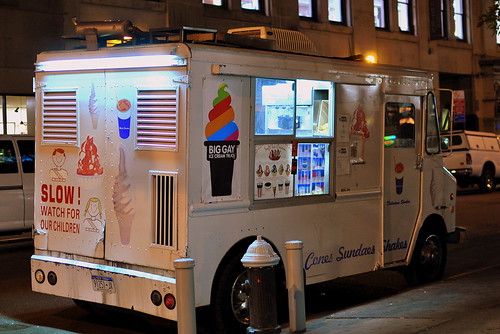 What brings a small, straight gal to the Big Gay Ice Cream Truck? Curiosity, a love of frozen treats, and an immense appreciation for bold statements. Launched by Doug Quint this past June, the Big Gay Ice Cream Truck takes soft serve to places Mr. Softee wouldn’t dream of. There are crowd pleasing flavors like vanilla, chocolate, and swirl, but for those who like to dabble in a little savory with their sweets, the truck dolls out olive oil, sea salt, and bacon too! 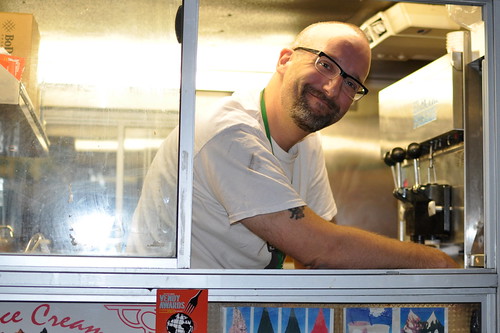 The Big Gay Ice Cream Truck cruises the West Village by day and stakes out the East Village and Chelsea by night. The Astronomer and I tracked down the truck on our final evening in New York at Astor Place. As we approached the truck, both of us agreed that the Big Gay Ice Cream Truck wasn’t nearly big or gay enough. We were expecting cha-cha music blasting from speakers and a rainbow painted facade, but alas, the only element that differentiated this truck from other soft serve vendors was a lowly poster. 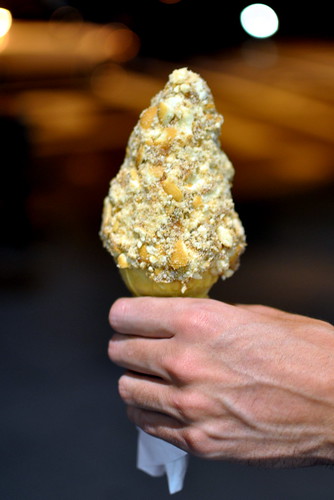 Based on a recommendation from Mr. Quint, The Astronomer and I indulged in a vanilla cone coated in caramel and crushed Nilla Wafers ($4). A bit of Nutella was piped into the bottom of the cone to make it extra decadent. The cone certainly hit the sweet spot, but it also satisfied something deeper—my desire to make a statement with my fork.

The truck closed up shop for the season two weeks ago and will re-open when the weather warms up. Follow the Big Gay Ice Cream Truck on Twitter @BigGayIceCream to find out when it “comes out” of hibernation. Oh Lord, someone stop me.