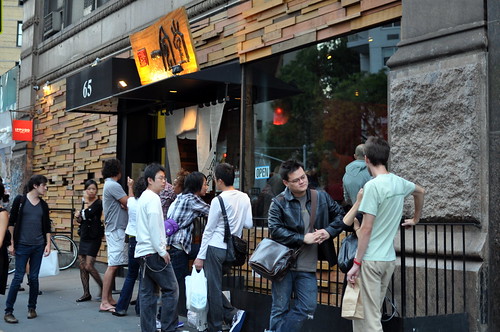 Ippudo, the first American outpost of a Japanese chain of more than fifty restaurants, is arguably the best ramenya in all of New York City. The noodles here are so delicious that Manhattanites, a self-selected group of extremely busy and rarely patient people, wait around for over an hour to snag a seat and slurp their hearts out. The sidewalk outside the restaurant is commonly lined with hungry ramen seekers due to Ippudo’s immense popularity and annoying no reservation policy. There are certainly alternative remenyas within walking distance [See: Momofuku Noodle Bar and Minca Ramen Factory], but most are willing to stand around and twiddle their thumbs for Ippudo’s superior bowl. 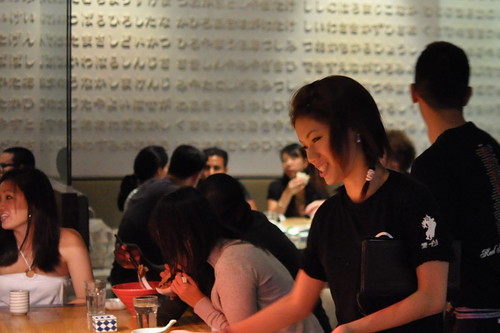 Compared to the other remenyas in the neighborhood, Ippudo’s space is thoughtfully appointed and downright palatial. Even with a grandiose dining room, our party of five had to wait for an hour on this Sunday evening before being seated at a comfortable booth toward the back of the restaurant. Manhattan has been bitten by the rameniac bug. 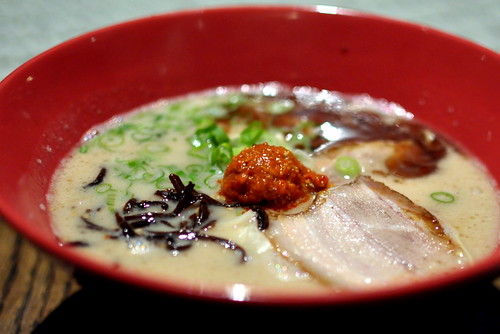 Four members of our party ordered the Akamaru Modern ($13), Ippudo’s richest and most exquisite bowl of ramen. The soup’s signature tonkotsu broth was made by boiling pork bones, fat, and collagen over high heat for hours. The result was a lusciously thick broth that was deeply imbued with porky goodness. The mildly viscous broth clung to every noodle strand, assuring that every slurp was laced with the soup’s deep flavors. The Akamaru Modern was accented with miso paste, garlic oil, slices of simmered berkshire pork, cabbage, onions, kikurage (wood ear mushrooms), and scallions. 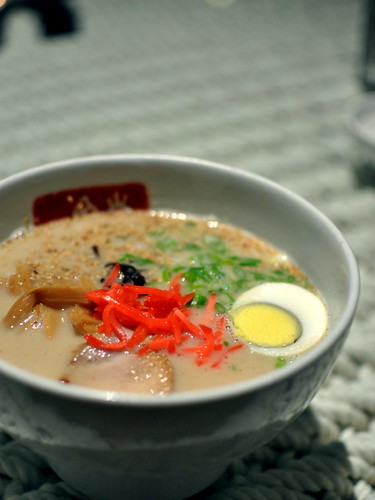 Since I promised to share my Akamaru Modern with him, The Astronomer ordered the Shiromaru Hakata Classic ($13). His bowl contained Ippudo’s signature tonkotsu broth as well, but it tasted milder without the addition of garlic oil. The noodles were topped with berkshire pork, kikurage, red pickled ginger, menma (a condiment made from dried bamboo), half a hard boiled egg, sesame seeds, and scallions. 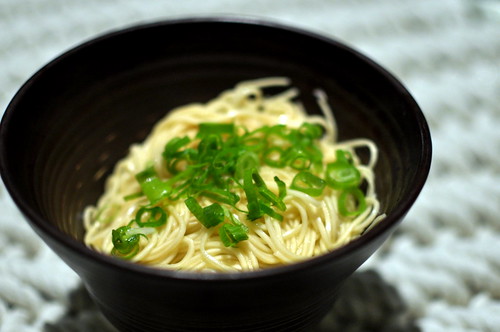 Each bowl of ramen contained Ippudo’s slender, springy house-made noodles. Once The Astronomer finished his first heap, he took advantage of Ippudo’s kae–dama system and ordered a “refill” ($2) to plop in his still-warm broth.