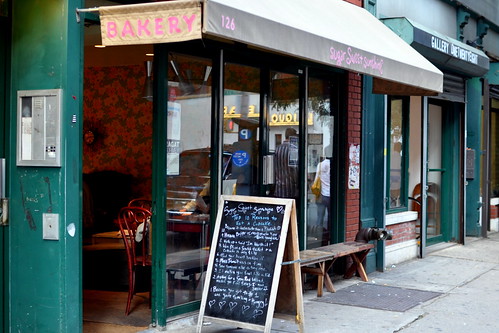 Being so vocal about my adoration of cupcakes has resulted in a slew of cupcakery recommendations from coast to coast. Next month while I’m in The Bay, I’ll be making my way to Kara’s Cupcakes thanks to a tip from my cousin Megan. And whenever I find myself in the District of Columbia, I know to hit up Georgetown Cupcake because gas•tron•o•my reader Ariel swears it’s even better than the godfather of cupcakes, Magnolia Bakery.

A few months before our trip to New York, The Astronomer and I received an email from our friend Matt. After successfully completing an epic cupcake crawl through Manhattan, he was thrilled to inform us that Sugar Sweet Sunshine produced the day’s top cupcake. The best part, he noted, was that the cupcakes cost a pittance—a buck fifty to be exact. A cheap and delicious cupcake experience in the Lower East Side? I knew we’d have to stop by. 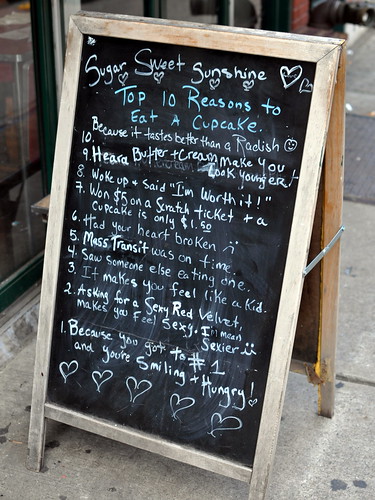 As soon as we arrived in the city after a weekend away in Philadelphia, The Astronomer and I dropped off our luggage and headed to Sugar Sweet Sunshine for a pre-dinner bite. A list of the “Top 10 Reasons to Eat a Cupcake” greeted us from the street. I thought that the list was seven items too long. I only needed three reasons to pay Sugar Sweet Sunshine a visit—it was cheap, tasty, and nearby. 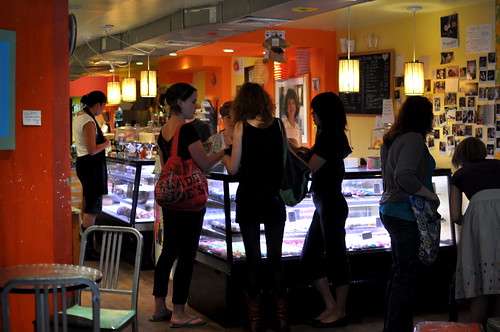 Once again, The Astronomer was the only male patron inside the cupcakery. It doesn’t take an astrophysicist to figure out that chicks really dig cupcakes. 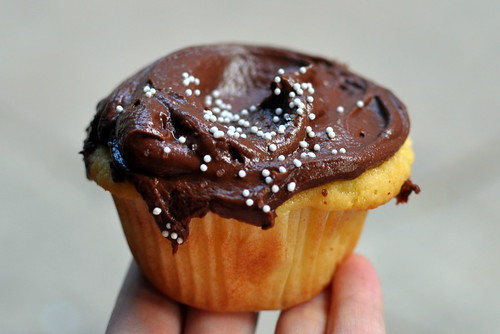 I ordered a “Bob,” which consisted of yellow cake with chocolate almond buttercream. I never thought of my favorite combination as dull, unoriginal, and Bob-like, but compared to the other flavors, this one was quite ordinary.

When it comes to cupcakes, I prefer those that are stylishly decorated and have denser textures, a la Sprinkles. Even though Bob was the complete opposite, I still fell hard for the fella because he was just so gosh darn delicious. The cake was soft and fragrant, while the frosting possessed a balanced chocolaty sweetness. Bob is the king of team “In-the-Box.” 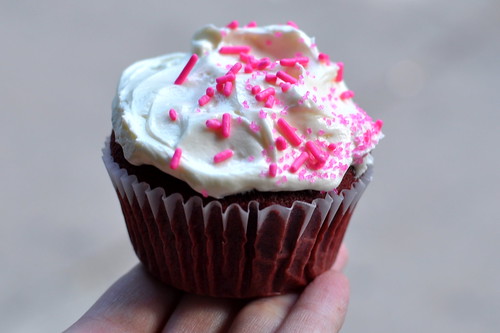 I purchased a Sexy Red Velvet to-go for my brother. Whereas traditional red velvet cakes are iced with a cream cheese frosting, Sugar Sweet Sunshine’s employs “The Moose,” a satin buttercream. Interestingly, my brother felt that the cupcake wasn’t sweet enough. Now, that’s a complaint that isn’t heard too often in the cupcakery circuit!