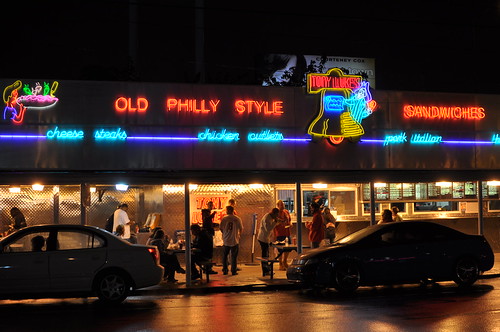 After living away from Philadelphia for two long years, pulling into Center City on board the Chinatown bus felt kind of magical. The weather was blustery and the skies were gray, but all that didn’t matter. I was in my old stomping grounds and it felt beyond good to be back. For our first dinner in the city, The Astronomer and I paid Tony Luke and his famous cheesesteaks a visit. The cab ride to this distant part of the city cost more than our meal, but there was no other place we’d have rather been. 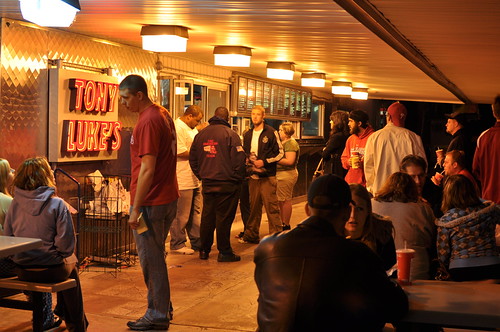 Back when I lived in Philly, I conducted a few cheesesteak throwdowns between Pat’s King of Steaks and Geno’s Steaks. My brother and I pitted the two South Philly powerhouses against one another in 2004 with Pat claiming victory. The Astronomer and I conducted a rematch during the spring of 2007 with Geno coming out on top. In the years since I’ve moved away from Philly, I’ve come to realize that both Pat and Geno are famewhores. The good stuff is at Tony Luke’s. 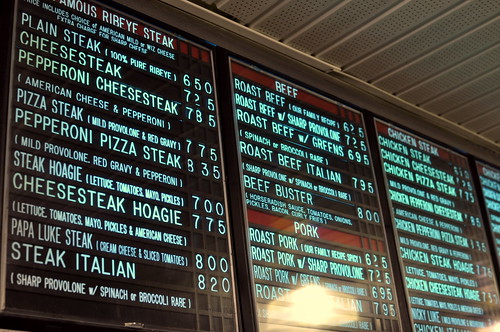 The counter at Tony Luke’s is manned by a brusque but efficient woman. Even though she wasn’t particularly friendly to us, I’d take her any day over the intimidating and burly beasts working over at Pat’s and Geno’s. I ordered a cheesesteak with grilled onions and Cheez Whiz ($7.25), while the Astronomer went for another Philadelphia classic, a roast pork sandwich ($6.25). 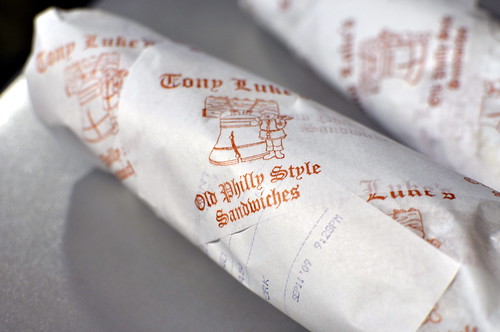 The sandwiches arrived rolled and wrapped in butcher paper. 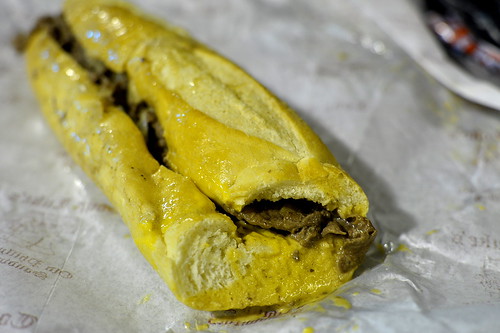 Both of my sandwich’s namesake components were totally right on. The steak, a pleasing cross between hacked bits and thin slices, was well seasoned and browned around the edges. The “cheese” didn’t possess the most appealing color, but it tasted fine enough and moistened the entire sandwich. What’s especially noteworthy about Tony Luke’s creation is the bread. Soft, yet sturdy, the hefty Italian roll held every ingredient in place and gelled seamlessly with the meat, onions, and Whiz. With the weather so cold and my stomach so empty, I scarfed down this sandwich much too quickly. 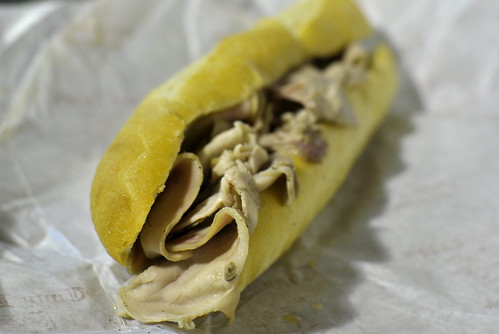 The Astronomer’s roast pork sandwich was served on the same Italian roll as my cheesesteak and filled with slices upon slices of moist and juicy pork. Unfortunately, The Astronomer passed on the Provolone and broccoli rabe this evening, which I think are absolutely essential. Roast pork sandwiches may not be as popular as cheesesteaks, but they’re seriously just as good. Tony Luke’s roast pork is even better than DiNic’s, which is located inside the Reading Terminal Market.

After filling our gullets with authentic regional cuisine, The Astronomer and I met up with our old XC teammates for drinks at The Bards. I still can’t believe the Irish Pub was enforcing a cover charge. As if!