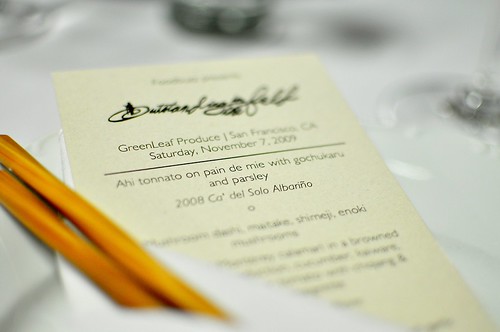 Over two hundred food bloggers descended upon San Francisco this past weekend for the first ever Foodbuzz Blogger Festival. For two days straight, The Astronomer and I ate, drank, and socialized our little hearts out along with featured publishers from across the globe. Aside from the wonderful bloggers that we met and the crazy amounts of swag that we were gifted, one of the highlights of the festival was a unique farm-to-table dinner orchestrated by Outstanding in the Field. 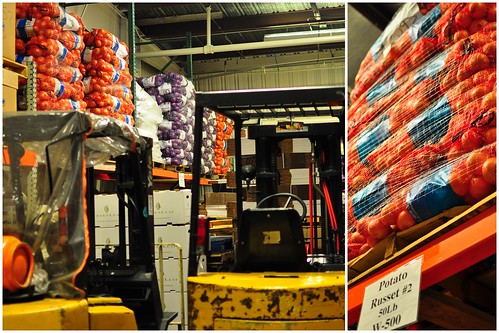 Outstanding in the Field is a roving dinner program that sources ingredients locally and celebrates farmers and food artisans. Their feasts are usually held on a picturesque farm during the summer months and feature long tables where well-dressed diners are seated side-by-side.

Since the closest farms to San Francisco are well over fifty miles away, our dinner was held at the next best place, the Greenleaf Produce Warehouse. Chef Dennis Lee of Namu spearheaded the multi-course affair, while winemaker Randall Grahm of Boony Doon provided the libations. 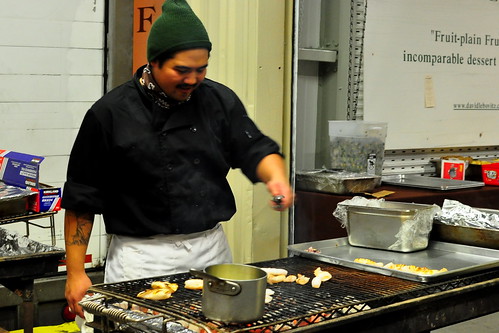 The entire meal was prepared in a makeshift kitchen near the front entrance of the warehouse. This smiley cook was grilling up squid upon our arrival. 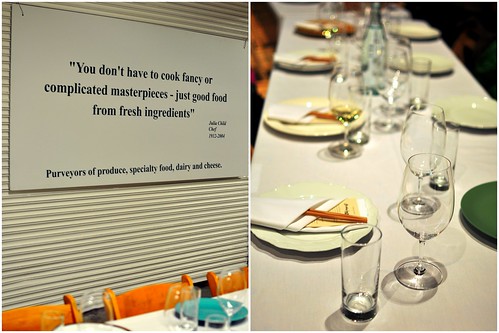 Dozens of tables draped in white linens zigzagged in between the warehouse’s produce-lined shelves, transforming the industrial space into a more elegant one. Inspiring quotes by culinary greats lined the walls. 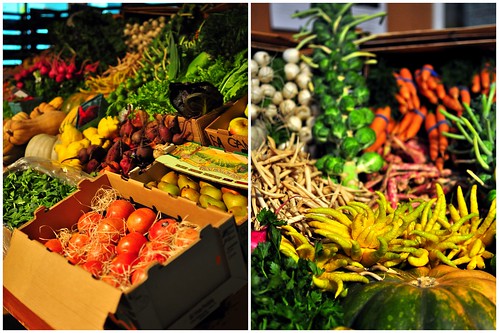 In the center of the room was a colorful display of the season’s bounty, including carrots, Brussels sprouts, Buddha’s hand, persimmons, and pears. Many of these items would later appear in our meal. 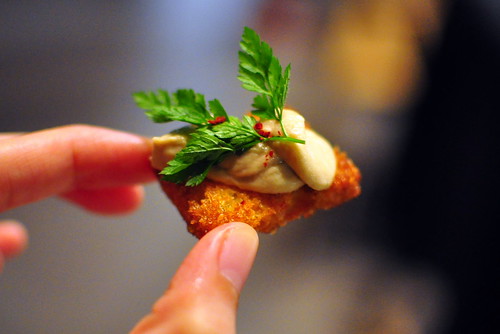 Before sitting down to dinner, we mixed, mingled, and munched on ahi tonnato on pain de mie with gochugaru (hot pepper flakes) and parsley. The small amuses were paired with a 2008 Ca’ del Solo Albarino. 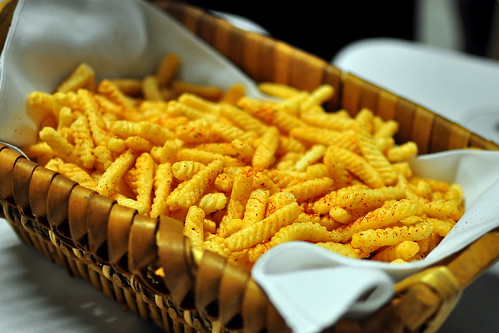 Shrimp chips dusted in a spicy, MSG-laced seasoning replaced traditional bread service. My table mate Sandy, also known as The Foodhoe, couldn’t keep her paws away from this basket of addicting crunch. 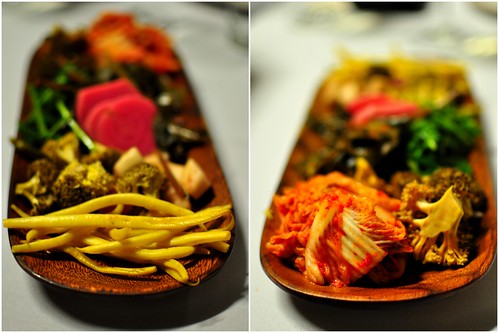 We were also served a selection of puckery pickled vegetables to start. The broccoli, kimchee, and yellow beans were three of my favorites. 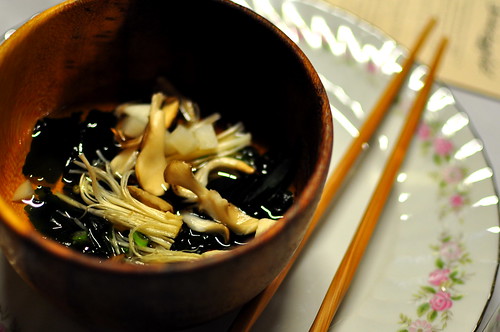 One of simplest and most satisfying dishes of the evening was the mushroom dashi soup with maitake, shimeji, and enoki mushrooms. I loved how the ratio of broth to fungi was seriously skewed, causing the chunky mushrooms to poke above the broth. 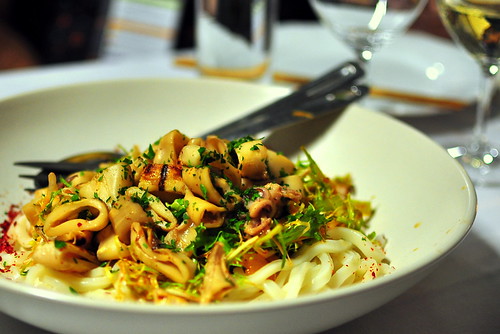 With the exception of the mushroom dashi soup, every course was served family style. A vibrantly colored platter of udon noodles topped with grilled Monterey calamari arrived after the soup. The locally-sourced squid wasn’t especially tender (I’ve been spoiled by the squid in Phu Quoc), but its smoky and fresh flavor was definitely to my liking. In fact, after everyone was served, I asked for the platter to be passed back to me in order to fish up the uneaten rings of squid.

The noodles had excellent texture, as did the accouterments—cucumber, kaiware (sprouted daikon radish seeds), frisee, and yellow pear tomato. The only element of the dish that could’ve used a bit more pizazz was the browned butter ponzu reduction, which bordered on watery. This course was paired with a 2007 Le Cigare Blanc. 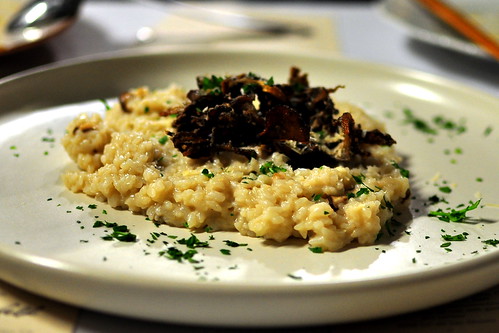 It took a lot of self control to serve myself only a small portion of the mushroom risotto made with koshihikari rice and topped with crispy maitake mushrooms. Our table could have easily finished another platter of this creamy carbohydrate. 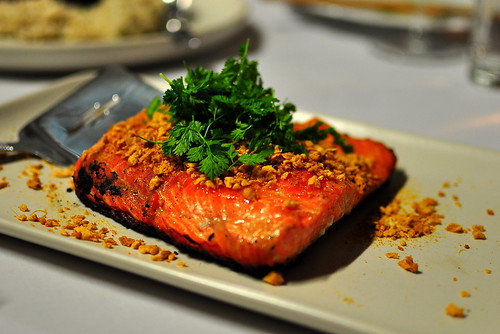 One of The Astronomer’s favorite dishes was the sea trout baked with dashi kombu (kelp), fried garlic, and Japanese curry powder. The texture of the lightly cooked fillet was buttery and supple, and the curry powder provided a subtle, delicious heat. 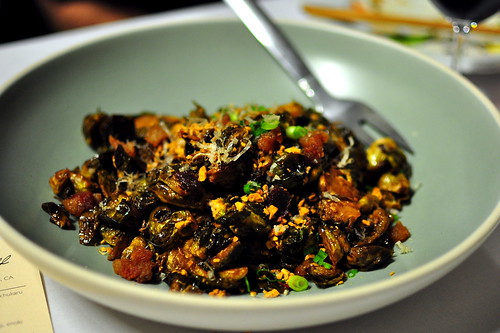 The roasted Brussels sprouts with ponzu fried garlic, guanciale, and bonito flakes were the next to arrive. The tender Brussels sprouts soaked up the diverse collection of flavors beautifully. 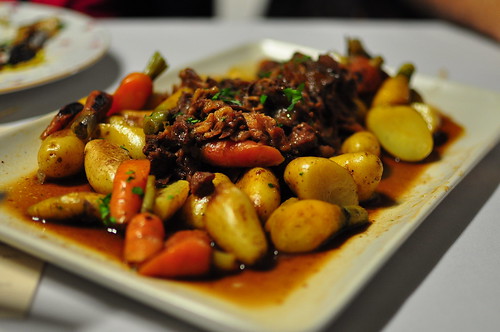 The final savory course was soy braised beef cheeks and oxtails with baby carrots and fingerling potatoes. As anticipated, the meat was fall-off-the-bone tender (ha!) and deeply infused with OB Beer and doenjang (fermented soybean paste). The carrots and potatoes were too undercooked for me, but The Astronomer thought they were just right. The final two courses were paired with a 2005 Le Cigare Volant. 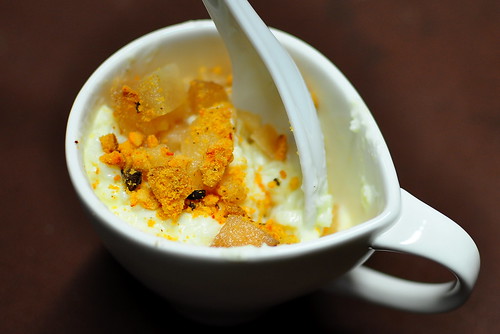 Dinner wrapped up on an unmemorable note with a Koshihikari rice pudding with cookie crumbles and Warren pear. It was paired with a 2008 Vinferno. Considering that each course was prepared from a temporary kitchen inside a frigid warehouse, this meal was a resounding success.

Thank you to Foodbuzz for making this awesome weekend possible. And thank you to all of the terrific bloggers who made the Foodbuzz Blogger Conference one to remember: Foodhoe, Javaholic, Foodaphilia, Let Me Eat Cake, Fries with that Shake, Food Addicts, Hot Pink Manolos, L.A. and O.C. Foodventures, Local Lemons, Teenage Glutster, FoodGPS, Mattatouille, Pepsi Monster, Gourmet Pigs, Active Foodie, Kung Food Panda, Ravenous Couple, Fooding 411, Dishing Up Delights, and The Duo Dishes.

23 thoughts on “Outstanding in the Field – San Francisco”