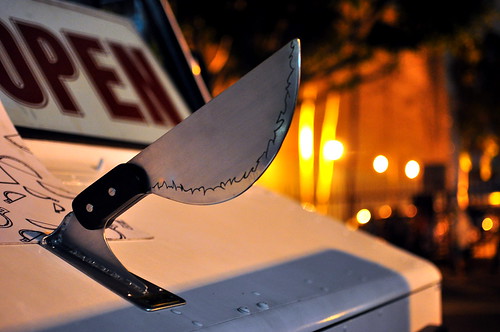 I love the Los Angeles mobile food scene. Sure, the food can be hit or miss and the lines can be alarming, but I’m a sucker for entrepreneurial ventures, especially of the edible variety. The only beef I have with the  movement is its extreme bias toward The Westside of the city. Those of us who dwell east of the 5 must hoof it across town to partake in the fun or resign ourselves to weeping over our Twitter feeds. I’d willingly give up the Rose Parade in exchange for some meals-on-wheels affection!

On the second Thursday of every month, something downright magical happens—all of the city’s gourmet roach coaches roll into downtown Los Angeles for the Art Walk. Downtown isn’t exactly Pasadena, but it is definitely closer to home than Venice, so I’ll take what I can get. 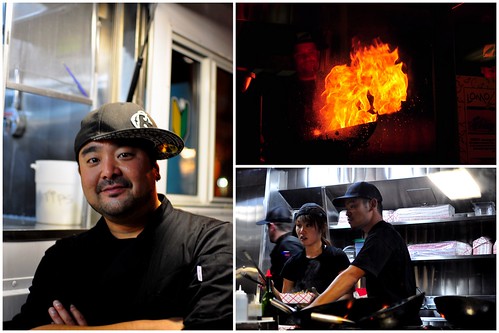 The first truck that The Astronomer and I visited on a recent Art Walk venture was Lomo Arigato. Eric Nakata, the truck’s chef and owner, dishes out Peruvian cuisine with a Japanese flare. According the Chef Nakata, the food is Peruvian while the spicing is Japanese (i.e. Kikkoman soy sauce). The name of the truck is a combination of its signature dish—lomo saltado, and the Japanese word for ‘thank you very much’—domo arigato.

What’s special about the Lomo Arigato truck is its “open kitchen.” While waiting for our food to be prepared, we were entertained by a pyrotechnic display. 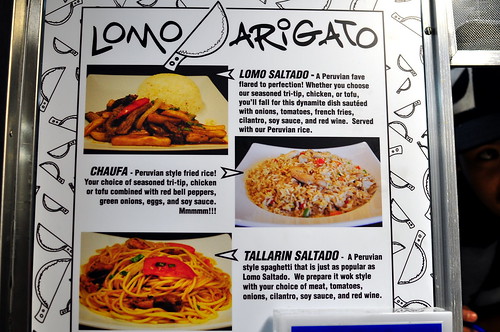 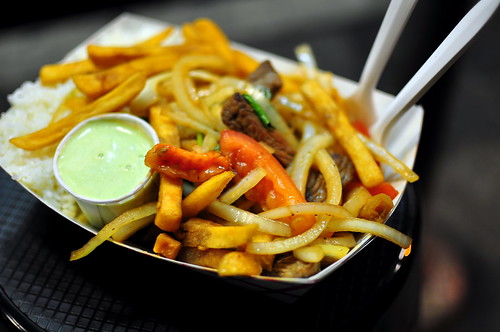 The Astronomer and I went with Chef Nakata’s suggestion and ordered the signature lomo saltado, which was comprised of tri-tip steak, onions, tomatoes, cilantro, and french fries sauteed in red wine and soy sauce, and served over white rice. Aji sauce, also known on the truck as “the green sauce,” was served on the side.

The generously portioned lomo saltado was seasoned simply and well. The aji sauce stood out as the star of Lomo Arigato show. Its complex spiciness and addicting creaminess kicked all of the ingredients up several notches. Our only complaint with the lomo saltado was that the onions weren’t cooked well enough. A gentle caramelization would’ve made the entire dish a lot more appealing. Next time around, I’ll specifically request for the onions to be well done.