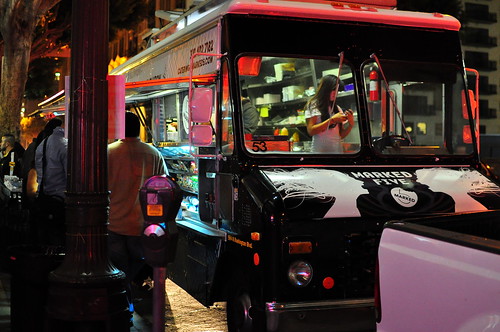 With our bellies stuffed UN-style with Peruvian-Japanese, Chinese-Mexican, and straight-up Indian street food, The Astronomer and I probably should have thrown in the towel and called it a night. However, dwelling on the East Side, we had no idea when another opportunity would arise for us to come face-to-face with this many gourmet food trucks again. A combination of fear, gluttony, and scarcity inspired one last stop at Marked5, a truck specializing in “old school Japanese and new school American.” Say what? 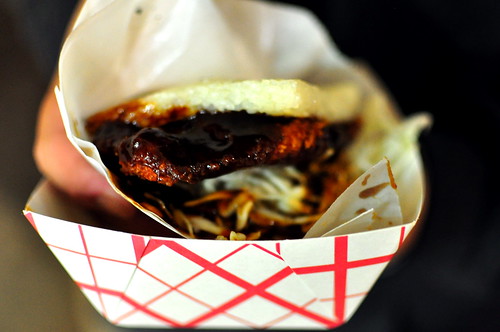 Heeding the advice of the Marked5 customers served before us, The Astronomer and I avoided the Torakku Beef Burger and ordered the Katsu Pork Burger, which was described as “tender, boneless pork fried to golden perfection served with Marked5 special Katsu sauce, along with fresh cabbage, and our signature handmade rice buns” on the menu.

The highlight of the burger was the thin slab of pork that was properly crunchy and fried to “golden perfection.” The Katsu sauce wasn’t exactly horrible, just a little sour tasting and overly liquored up. The least effective component of the Marked5 burger was the “bun.” It is of utmost importance that street food be transportable and neat enough to be consumed on one’s feet. Marked5’s prized rice buns disintegrated at first bite, leaving my hands glazed with sauce. I would have been willing to deal with the annoyance had the bun actually been tasty, but such a mediocre product did not merit that much of an effort.