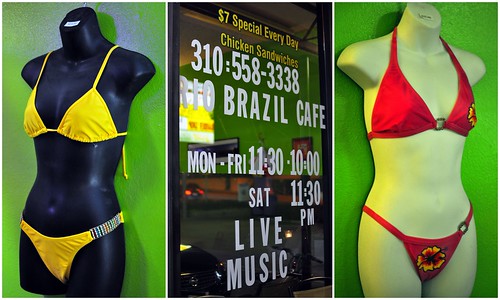 Every food lover should have a friend like Bill Esparza. There are many reasons to adore the author of Street Gourmet LA, but it’s his intense passion for sharing hidden food finds and his tremendous knowledge of Latin cuisines that I find endlessly appealing. Were it not for Bill’s generous nature, I probably would have gone through life without ever experiencing the awesomeness of sea urchin tostadas in Ensenada and dulce de leche piped churros in Tijuana. Exploring foreign countries and cuisines can be an intimidating experience, but with a trusty expert like Bill by my side, I feel empowered to try anything and everything that comes my way.

My latest culinary adventure with Bill was at Rio Brazil Cafe, a gem of a restaurant located outside Culver City. He invited Fiona of Gourmet Pigs, Liz of Food, She Thought, and yours truly to join him for an informal tasting highlighting Carioca cuisine—the regional specialties of Rio de Janeiro. If it weren’t for this lovely dinner invitation, I probably would have waited until the 2014 World Cup to try Brazilian fare.  What a shame that would have been. 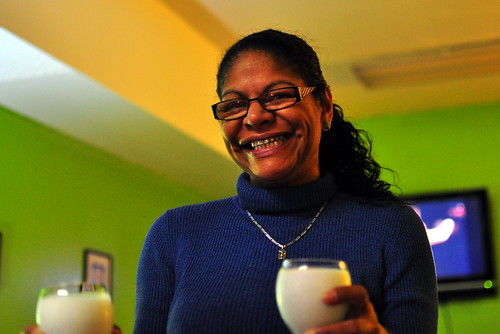 Luciene Peck, a native of Rio de Janeiro, is the proud owner of the fifteenth-month-old Rio Brazil Cafe. The restaurant was formerly named Brazilian Exotic Foods, but changed its name recently to reflect the regional carioca food being served. 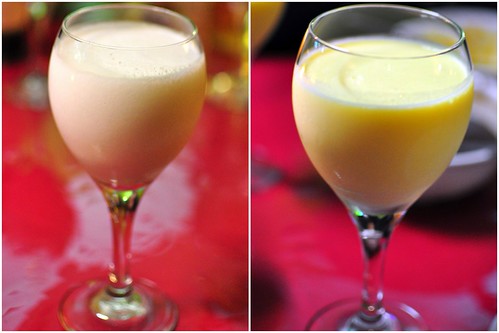 Bill brought two artisanal cachaças (Weber Haus and Isaura) with him to dinner because the restaurant is BYOB. Ms. Peck whipped up two fabulous batidas (fruity cachaça shakes) using Bill’s liquor. The first one, batida de coco (left), was made of coconut milk, coconut cream, condensed milk, and cachaça. The second one, batida de maracuja (right), was made of passion fruit, condensed milk, and cachaça. Both were cool, refreshing, and damn potent. 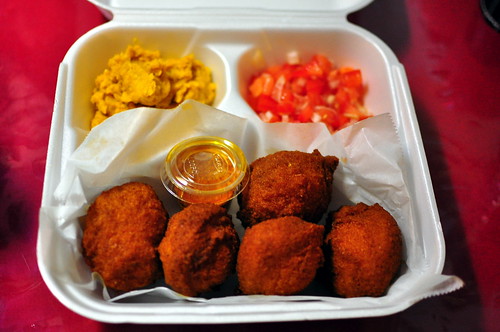 Our Brazilian feast began with a special delivery from Sabor da Bahia, a local Bahian catering company. The proprietress dropped off a box of warm acaraje, a traditional street food made of black eyed peas fried in dendê (palm) oil. The fritters were served with vatapa (shrimp paste), a tomato salad, and pimenta (malagueta pepper sauce).

To eat, we halved the fritters with a knife and filled them with the condiments on hand; I went heavy on the vetapa and light on the pimenta. The result was an amalgam of both cool and hot flavors coupled with a superb crispness courtesy of the fritter’s exterior. Think of these as Brazilian falafel. 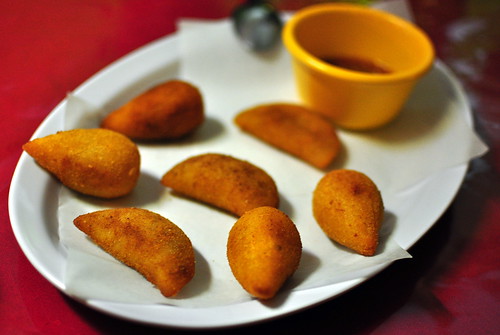 Following the acaraje, Ms. Peck served an array of little fried bites. The tear drop-shaped ones, coxinha de galinha, were filled with savory shredded chicken. According to Bill, the shape of the coxinha de galinha was meant to resemble little chicken legs. The half moon-shaped ones, risolis, were filled with cheese, meat, and chicken. A little drizzle of pimenta and we were in for a treat. 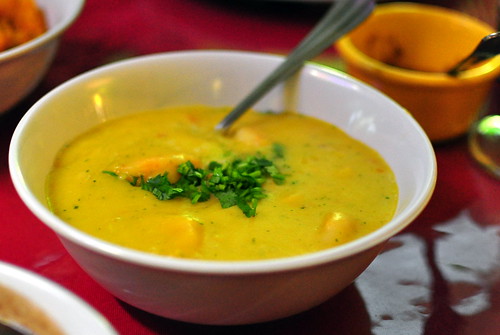 The first course to arrive was the bobo de camarao, a saucy little number comprised of tender shrimps bathed in a thick yuca cream sauce. The wonderfully hearty dish tasted terrific spooned over a heap of glossy white rice. 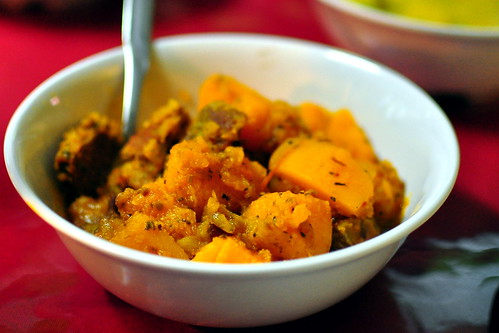 A bowl of abobora com carne seca (butternut squash with homemade beef jerky) was served alongside the bobo de camarao. The spicing was subtle, allowing the sweetness of the squash to shine. 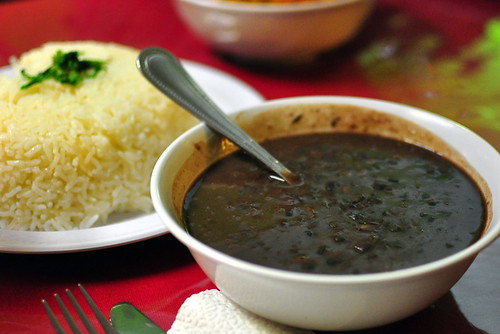 No Brazilian feast is complete without arroz (white rice) and feijao (black beans). Rio Brazil cafe uses Biju black beans, which are smaller than the ones used in Mexican cuisine. The feijao looked rather ordinary but tasted quite extraordinary due to hours spent simmering with pork and aromatics like bay leaves, onions, and garlic. 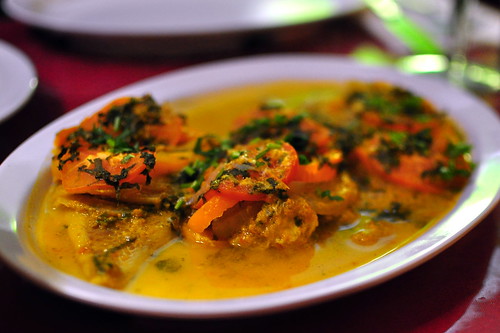 Next, we were served moqueca de peixe, a fish stew made of cod, peppers, tomatoes, dendê oil, and coconut milk. This dish is originally from Bahia, but the version we sampled was prepared Rio-style with less dendê oil. As with the bobo de camarao, we ate the moqueca de peixe over a bed of rice. Brazilian cooks oftentimes season and spice dishes intensely knowing that the flavors will be mellowed out with rice. This tradition reminds me of Vietnamese kho dishes. 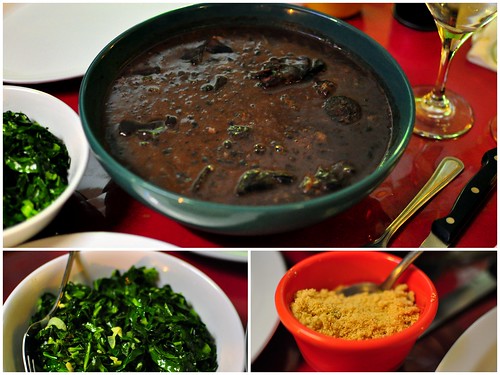 Our final savory course of the evening was feijoada, the national dish of Brazil. Due to the complexity and labor-intensive nature of this dish, Rio Brazil Cafe only serves feijoada twice a week, on Wednesdays and Saturdays.

Feijoada is a black bean stew that’s cooked for days with carne seca (beef jerky) and porky parts like trotters, tails, and ribs. Seasoned with onions, garlic, bay leaves, and rock salt, the feijoada was bursting with savory goodness and comforting in a stick-to-your-bones kind of way. Bill says that Ms. Peck’s version shames all others in Los Angeles.

The stew was served with garlicky and bitter couve (collard greens) for contrast, farofa (manioc meal) for  texture, and of course, plenty of white rice. 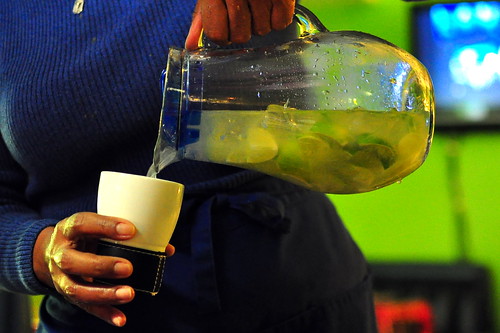 Before diving into desserts, we relaxed over glasses of caipirinhas made from muddled lime and sugar and cachaça. This was my favorite drink of the night. 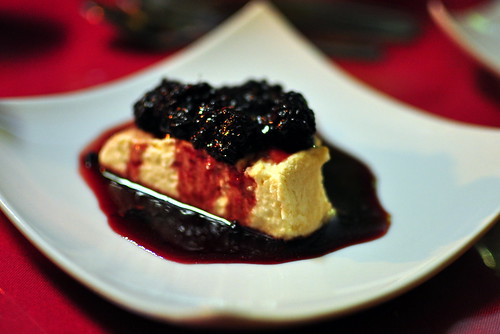 We closed out the evening with three desserts. The coconut cream with blueberries, raspberries, and boysenberries was light, with an appealing tartness from the plethora of berries. 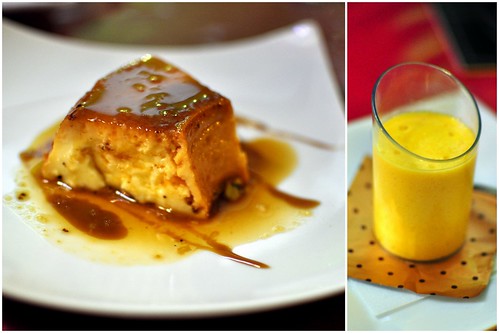 The Brazilian-style flan (pudim de leite) was dense, eggy, and very sweet, while the mango mousse (mousse de manga) was airy and mild. The desserts provided the perfect ending to a stellar Brazilian feast.

I know that not everyone is lucky enough to have a dining renegade like Bill in their lives, so my hope is that this write-up serves as a weak replacement. I encourage everyone to go forth and eat without limits, preferably at Rio Brazil Cafe.