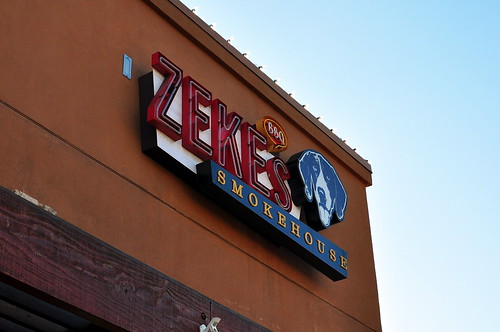 I swung by Zeke’s Smokehouse in West Hollywood last week to scope out the space for this Saturday’s Eat My Blog charity bake sale. I was planning on staying only a short while to take care of logistics and details, but the wondrous smells of slow roasting meats lured me into a booth and tied a napkin around my neck. Before I knew it, I was sitting down to big ‘ol plate of pulled pork sliders with tangy sauce dribbling down my chin. Barbecue is kind of magical. 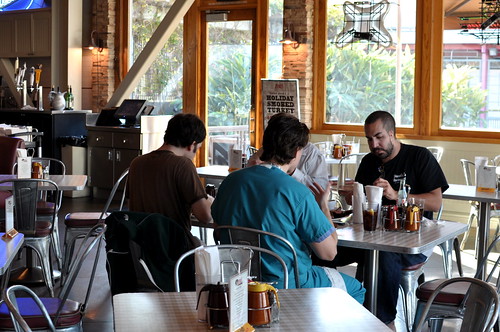 The original Zeke’s Smokehouse was opened in Montrose by chefs Leonard Schwartz (formerly of Maple Drive) and Michael Rosen (formerly of Reign), and their partners Ron and Kirk Gelsinger of Gelsinger Meats in 2002. The West Hollywood location opened in 2004. With Zeke’s Smokehouse, the two fine dining veterans aimed to bring the type of authentic barbecue usually found in ‘cuing capitals like Kansas City, Memphis, and Greensboro to Los Angeles.

The restaurant’s vibe is a casual blend of down home comfort and West Hollywood cool. With its exposed brick walls, vintage aluminum furniture, and homey plaid tabletops, Zeke’s sleeks up classic southern style nicely. The menu features everything under the smoke-able sun, from Texas-style brisket and beef ribs to Kansas City-style spare ribs and Memphis-style baby back ribs. 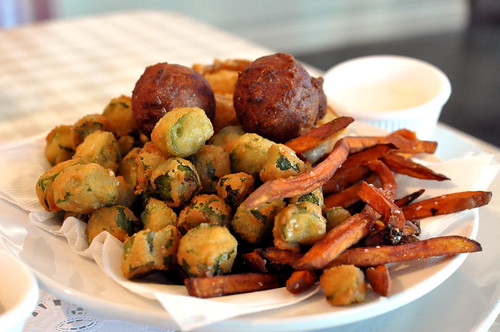 It is absolutely essential that all southern meals, even those being taken above the Mason Dixon, begin with an array of deep fried foods. The Frito Misto platter ($7.95), which comes with hush puppies, sweet potato fries, and onion rings, really got the Zeke’s party started. The restaurant’s resident fryer did a fantastic job making sure that each item was perfectly crisp and light on the grease factor. I highly recommend dredging the onion rings and fries in plenty of ranch dressing and smothering the hush puppies with a healthy smear of honey butter. If you bat your eyelashes and pull off a sweet smile, fried okra might appear on your Frito Misto platter as well. 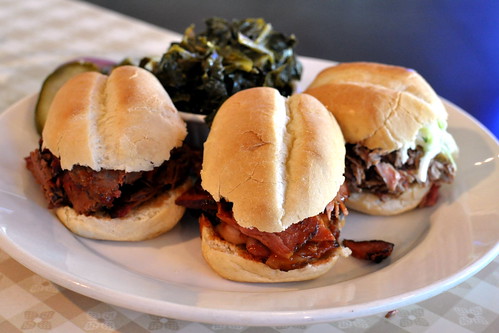 Since pork is my very best pal, the ham and pulled pork sliders were loved the most. The beef brisket came in a very close third. Unlike the squishy buns on barbecue sandwiches I’ve eaten in Alabama, Zeke’s buns had a bit more oomph and a nice, toasty exterior. Though not a ten on the authenticity scale, it was a fine improvement in my mind. 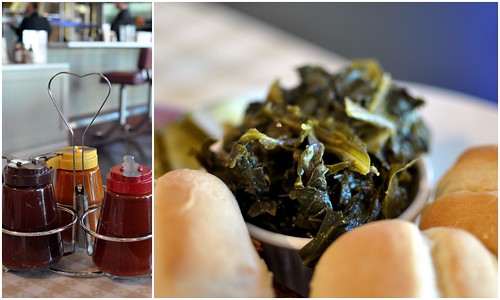 To accompany my trio of sliders was a trio of made-from-scratch sauces. The reddish-hued one brought slight heat and paired well with the beef brisket, while the Kansas City-style brown sauce was a little sweeter and went fine with the ham. My favorite combination was the Carolina mustard sauce with the pulled pork. The collard greens did their best to sway my meal in a healthy direction, which is all I could have really asked of them.