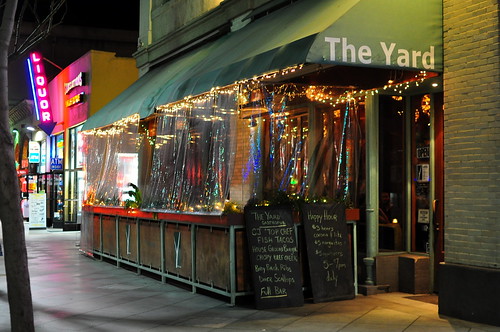 “Always fun to see which chefs actually show up at SaMo Farmers’ Market! Animal, La Cachette, Melisse, and The Yard were first in line,” tweeted @DanCoxPR early Wednesday morning. With plans to attend a media dinner at The Yard later that evening, I was stoked to hear that Chef Chris Jacobson was prepping for the event with fresh and seasonal ingredients. 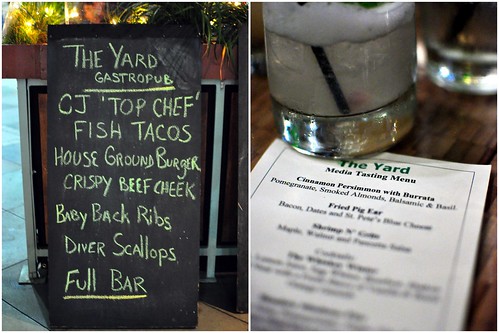 Chef Jacobson, better known as CJ from season 3 of Bravo’s Top Chef, came on board as The Yard’s executive chef this past October. Since his arrival, market-driven ingredients have guided the restaurant’s menu at every turn. With items like persimmons, burrata, and pig’s ears on the bill of fare, it’s clear that The Yard isn’t your average Santa Monica watering hole. I am admittedly more of an eater than a drinker, so I have a soft spot for gastropubs that put as much emphasis on the “gastro” menu as the “pub” one. 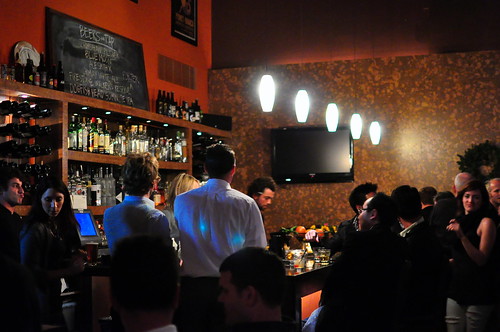 When The Astronomer and I arrived at The Yard around half past seven, the room was comfortably packed. After scoping out the scene at the bar, we quickly joined our party. Whereas most of the media events that I attend are comprised mostly of blogger-types, this one was an interesting mix of traditional print journalists and those in new media. One of my table mates, a loyal member of the old guard, informed me during our conversation that bloggers were killing newspapers. Let’s just say things got a little strange when I informed her that I was one of those evil bloggers. Oh, awkward! 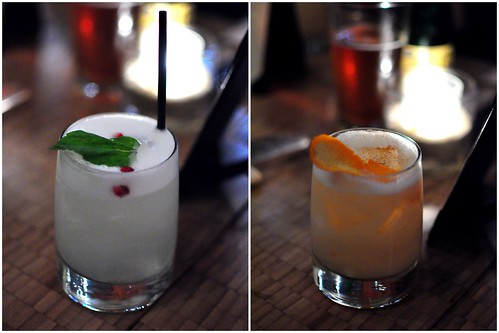 Before dinner officially started, The Astronomer and I sipped on two of The Yard’s holiday specialty cocktails. For him, a Whiskey Winter (honey, lemon juice, egg whites, bourbon, with vanilla and burnt orange garnish) and for her, a Hendrix Mistletoe Fizz (mint, lime juice, pomegranate, sugar, gin, egg whites with mint sprig and fresh pomegranate seeds). Both are priced at $10. 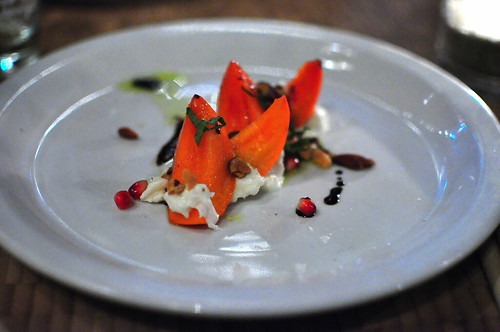 The first course was comprised of sliced Cinnamon persimmons with burrata, pomegranate, smoked almonds, balsamic, and basil ($10). The plate contained a myriad of different flavors and textures that I wasn’t sure would gel, but eaten all together, it all meshed in a very tasty way. The only glitch of the dish was that the persimmons weren’t peeled, so the finish wasn’t as smooth as it could’ve been. 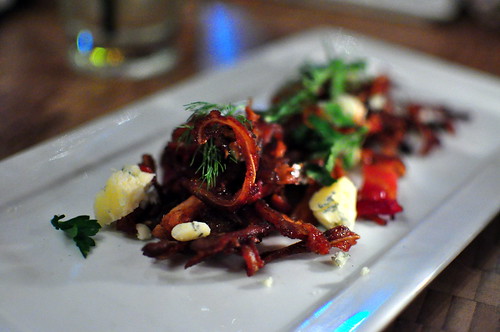 Next, we dug into a plate of fried pig ears with bacon, dates, and St. Pete’s blue cheese ($8). Based on the looks on everyone’s faces and the amount of food left uneaten, it was clear that The Astronomer and I were the table’s biggest fried pig ears fans. Blue cheese, bacon, and dates are a classic combination, throw into the mix some chewy pig ears, and something kind of magical happens. 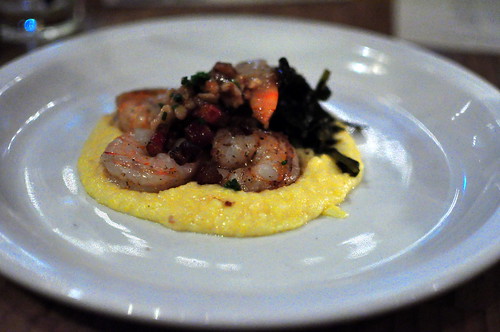 The final savory course of the evening was a unique interpretation of shrimp n’ grits ($12). The shrimp were tender, while the grits were rich and creamy. To put a unique spin on this classic Southern dish, the Chef added a spicy kale salad and an ultra-sweet mixture of maple syrup, walnuts, and pancetta. I was digging the Sriracha-infused kale, but the chunks of maple-coated walnuts were much too sweet. A little more restraint would’ve made this dish a winner. 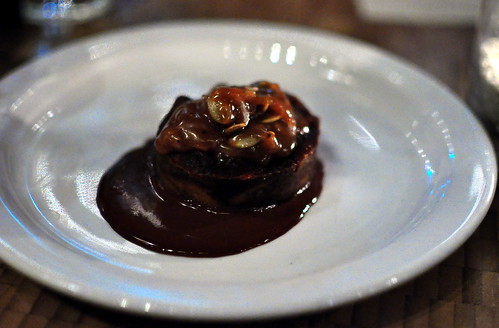 Finally, we were treated to an impromptu dessert that the Chef invented on the fly—chocolate bread pudding with spicy caramel mole sauce and pepitas. With distinct notes of chocolate, coffee, and chili, the thick and slightly savory mole tasted fantastic with the light chocolate cake. The dessert was an apt conclusion to one of the more interesting meals I’ve eaten in a while.

Thank you, Chef, for bringing pig ears to the beach.