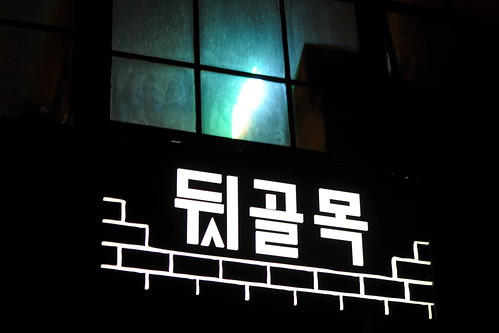 Dwit Gol Mok,* better known as DGM, is literally and figuratively a hidden gem. While its address reads Wilshire Boulevard, the entrance is actually tucked far behind the main drag. The Astronomer and I probably would’ve never found it had our friend Danny not provided us with detailed instructions. “Try to locate parking near Vermont,” he advised. “Then head down Berendo and through the parking lot.” We did what we were told and found ourselves in a dark and unassuming alleyway. There wasn’t an English sign in sight, but we followed the wondrous smells of smoky barbecue and pungent gochujang and made our way through the old wooden building blaring K-pop. 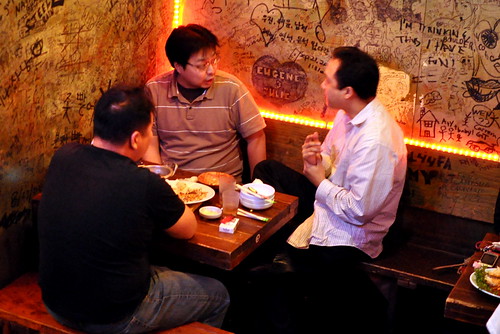 Once inside, we headed up to the second floor to locate Danny and the rest of our party, including the Two Hungry Pandas and the Starry Kitchen duo. Walking through the restaurant, I couldn’t help but notice the artful doodles covering every surface. I was kicking myself for not bringing along my collection of Sharpies to the restaurant. Next time around, I’m totally scribbling ‘Cathy+Vernon 4-Eva’ on the wall, surrounded by lots of little hearts. 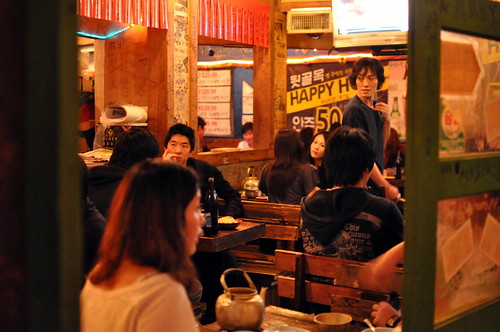 The specialties at this two-story graffiti palace are a killer combination of Korean bar food and potent soju. The crowd is young, mostly Korean-speaking, and always seem to be having a rowdy time. 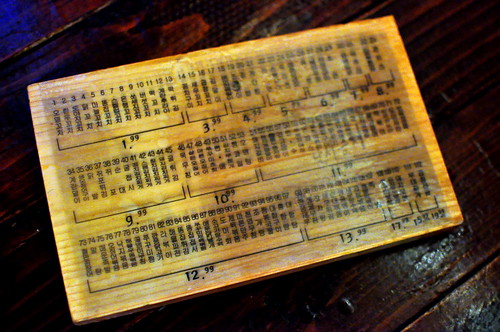 No one in our group was actually Korean, but fortunately Danny grew up on Korean fare and was more than capable navigating the wooden slab menu. DGM offers a 50% discount on all food ordered before 8 PM every day of the week as long as alcohol is ordered as well. We took advantage of this deal to the fullest on our visit. According to Danny, food is only discounted 25% if no booze is ordered. 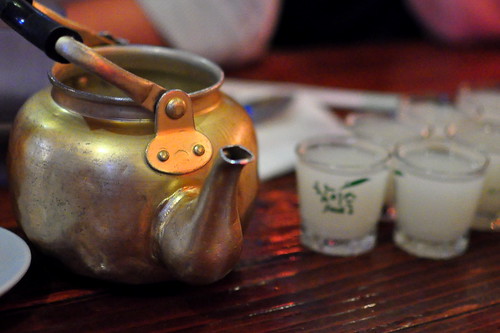 To start off our meal, we ordered two copper pots of soju, one yogurt and another peach. I was warned to sip slowly because soju tends to hide behind a curtain of sweetness and attack when one least expects. 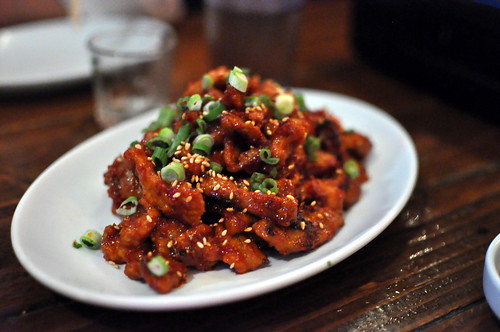 The marinated pork ribs were the first dish to arrive. The thin strips of meat were coated in a sweet glaze reminiscent of food court Chinese food. 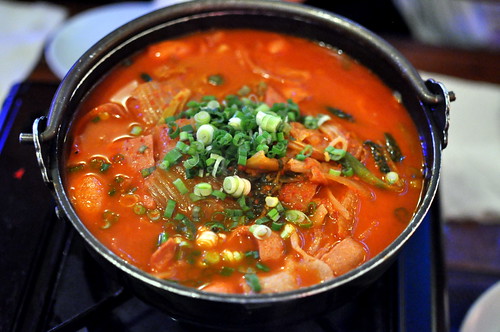 Next, a bubbling pot of budae jigae came to the table. Known as “army base stew,” this dish was invented following the Korean War when Seoul faced a meat shortage. Budae jigae was designed to make use of surplus foods from U.S. Army bases, including prepackaged ramen noodles and ready-to-eat hot dogs. The bulk of the soup’s flavor comes from a heavy heap of spicy Korean red pepper paste—it made me sweat. 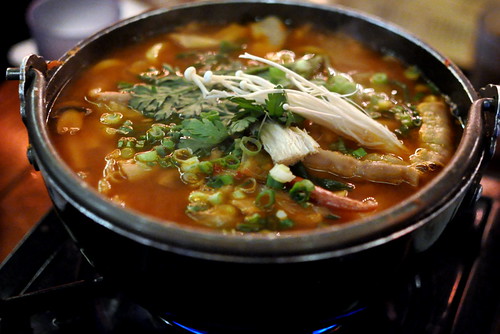 The spicy intestine soup with udon noodles packed some heat as well, but was milder than the budae jigae by several notches. The intestines benefited from the roaring fire beneath them and were very tender and supple. 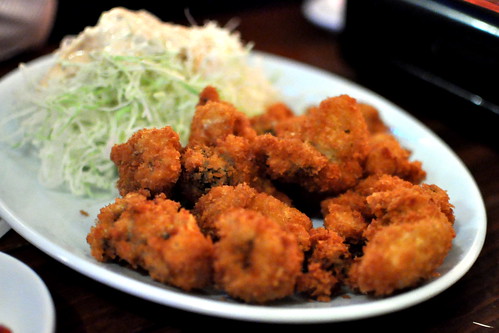 The fried oysters pleased the crowd with their crisp and crunchy breading and briny hot innards. 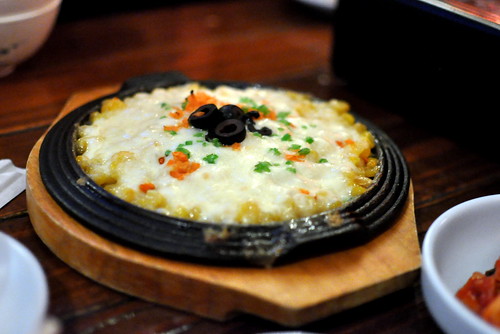 Nguyen of Starry Kitchen made a special request for cheese corn, which arrived on a sizzling platter. Even though I love both cheese and corn, I wasn’t so sure that they’d meld together well. While the combination was far from offensive, the corn’s saccharine-like quality was overwhelming. A little less sweetness and I would’ve been on board. I did enjoy the delightful sear that the platter imparted on the kernels. 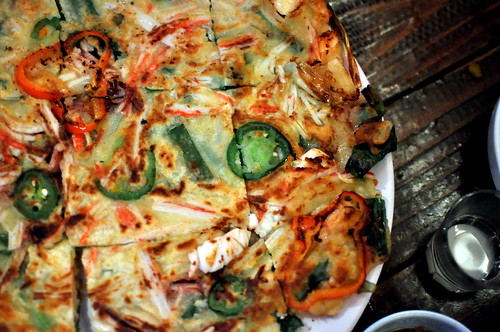 The hamul pajun (seafood pancake) was seriously good. I was taken by the tender and plentiful squid. 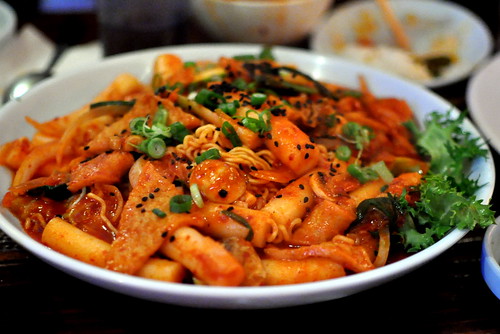 I made a special request for rabukkee (spicy dukboki with ramen noodles) because I have an inexplicable affinity for cylindrical rice cakes smothered in hot gochujang. The ramen noodles added a unique and welcome touch to the dish. I find that additional carbs are rarely a bad thing. 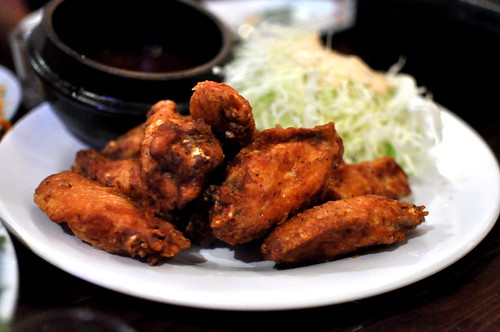 Lastly, an order of ton dak (spicy chicken wings), which was served with a side of Thousand Island-dressed cabbage and a bowl of tangy sauce for dipping. The Astronomer was impressed by the wings and their accompanying sauce, which tasted like a blend of of tamarind and Sriracha.

Our party of seven racked up a $93 tab when all was eaten and sipped. Considering our grand spread, the total was a pittance. I’m excited to return to DGM to practice my Korean food pronunciations (currently, they are atrocious) and to introduce a newbie to this hidden find. Joints like DGM are what make living and eating in Los Angeles so awesome.

* Word on the street is that dwit gol mok is Korean for “back alley.” How appropriate.