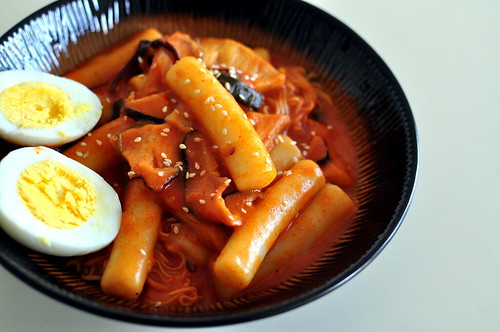 My name is Cathy, and I am a dukboki-aholic.

My obsession was born late last summer at the soft opening of Cham Korean Bistro in Pasadena. I wasn’t sure what to expect when I placed my order for “rice cakes,” but what arrived seduced my carbohydrate-loving heart forever. The doughy cylinders were prepared simply and satisfyingly with thin cuts of beef, a smattering of vegetables, plenty of garlic, and an umami-fied soy sauce. The flavors and textures were so familiar and yet so fresh. From there, I sought out dukboki throughout Koreatown and picked my friends‘ brains about where to find the city’s best. Long before I knew its proper Korean name, I was completely hooked.

Whereas my first brush with Korean rice cakes was savory and safe, the versions I encountered thereafter were fiery, saucy, and slightly sugary. In place of Cham’s beef, mushrooms, and broccoli florets were chewy fish cakes, hard boiled eggs, and the occasional pack of ramen noodles. The two styles of dukboki were like night and day, and I loved them both.

To guide me through my first attempt at preparing dukboki at home, I turned to Maanchi, an Internet Korean cooking sensation, and my friend Danny, a Taiwanese boy who grew up on Korean fare. I learned the basics viewing Maanchi’s step-by-step video, and then Danny stepped in to fill in the blanks. This recipe was also influenced by the bevy of dukboki I ate in Koreatown. 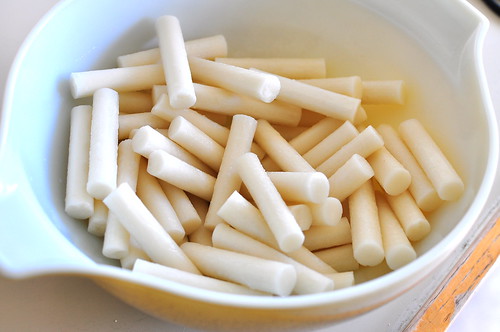 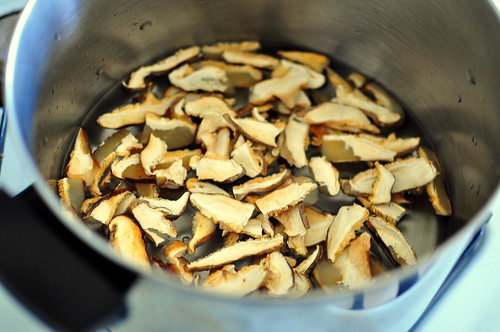 In a large pot or saute pan, bring water and dried mushrooms to a boil over medium-high heat. [Maanchi’s version calls for dried anchovies rather than mushrooms.] Once the mushrooms have softened, add the rice cakes, fish cakes, gochujang, and sugar to the broth. Simmer for approximately 25 to 35 minutes, stirring constantly. 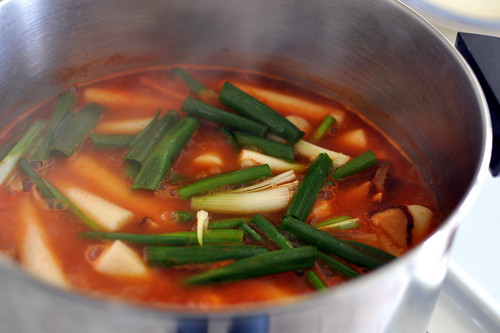 When the rice cakes are al dente and the sauce has slightly thickened, add the green onions, white onions, and zucchini. Season the broth with additional sugar and/or gochujang to taste. If using ramen noodles, add to the mixture after the vegetables are fully cooked. [Dukboki with ramen added is called rabukkee.] Finally, stir in the hard-boiled eggs. 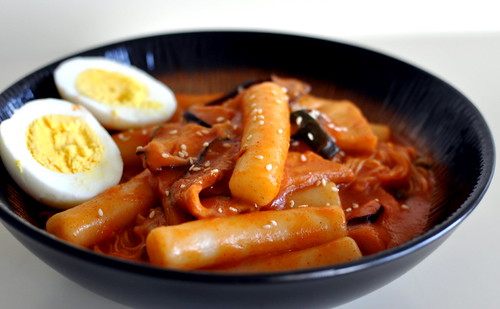 The dukboki is ready when the sauce is thick enough to coat the rice cakes, and the rice cakes are plump and soft all the way through.  Sprinkle with sesame seeds and serve immediately.