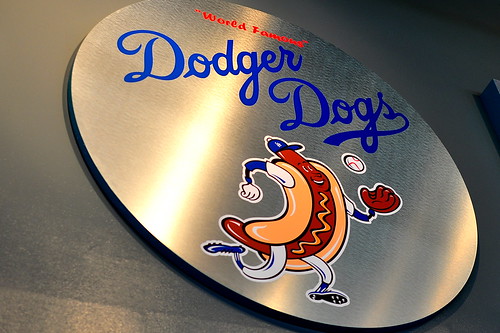 I avoided eating a Dodger Dog last season out of fear that doing so would cause The Astronomer’s beloved St. Louis Cardinals to lose to the Los Angeles Dodgers. After the Dodgers swept the Cards in the Division Series with me consuming only team-neutral concessions, I vowed to eat whatever my heart desired the following season. Superstitions be damned. 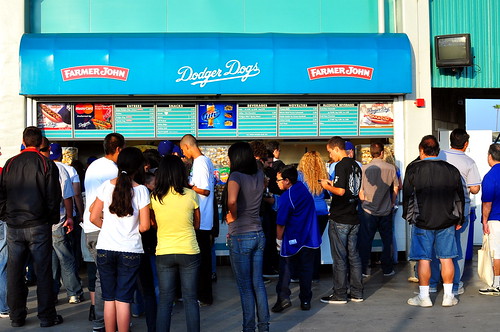 We returned to the ballpark last week to witness some regular season play between the Dodgers and the Cards. With the sun slowly setting in the distance and cheery fans sporting their brilliant Dodger blue, my appetite was piqued for greasy stadium fare. 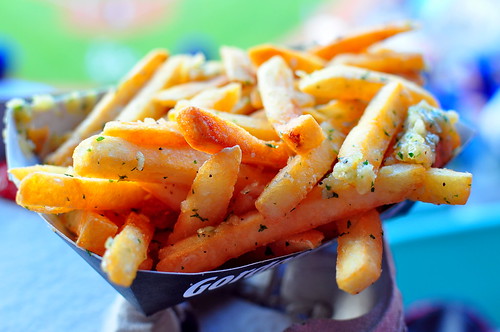 During the first inning, The Astronomer and I shared an order of Gordon Biersch garlic fries ($5.75). What makes these spuds super special is the abundance of minced garlic and parsley bits coating each shoestring. Every bite delivers an intense garlicky hit that’s dreadful for one’s breath, but oh so good for one’s soul. I’m not much of a sports fan, but I will gladly tag along to any event where these fries are served. 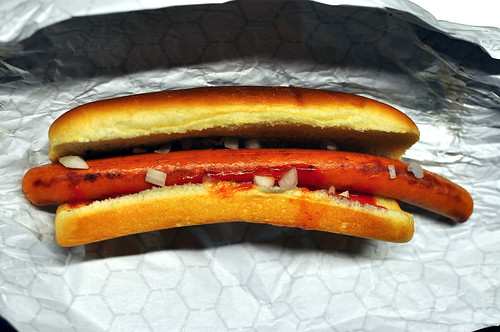 Sometime around the fifth inning, after the memory of the garlic fries had faded, we made a run for wieners. The Astronomer went with a traditional Dodger Dog ($5) because he’s not the least bit superstitious. Measuring over ten inches in length, the frankfurter extended quite a bit further than the bun. The Astronomer dressed it up with ketchup and onions.

The Dodger Dog tasted as expected—unspectacular, but more than satisfactory. The Astronomer appreciated that the dog was grilled, but felt that the bun was too hefty for such a skinny wiener. I agreed with him on both fronts. 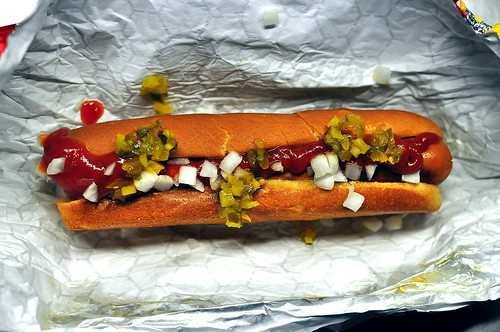 I took a walk on the spicy side and ordered a Picante Dog ($5.75). My dog wasn’t as long and lean as a Dodger Dog, but what it lacked in length, it more than made up in girth. As a result, the ratio of meat to bun was more to my liking. The flavor of the Picante Dog was legitimately fiery. In fact, I had to take a few deep breaths in between bites for the burning to subside. I’d definitely order this puppy again. 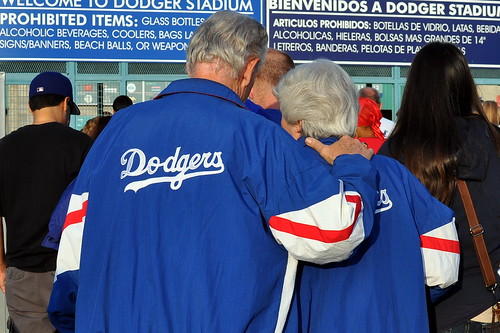 Even though I sometimes root against his team and am far more interested in eating at the game than watching it, I hope that The Astronomer continues to take me out to the ball game until we’re old and gray.

20 thoughts on “Buy Me Some Garlic Fries and Dodger Dogs…”