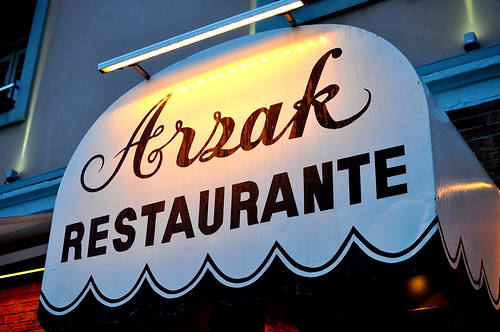 The Astronomer and I dined at Arzak on our final evening in San Sebastian. Of the trio of high end modern restaurants on our itinerary, I was anticipating this one the most.  Juan Mari Arzak, the restaurant’s chef and owner, is regarded as one of the great masters of New Basque cuisine. I’ve been gawking at photos of his food for years, so it was extremely exciting to finally step into his den and let the magic begin. 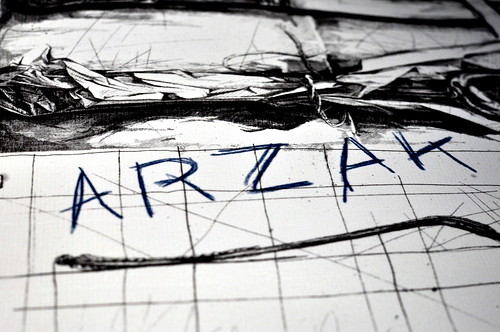 The building where the restaurant is located has been in the Arzak family since it was built in 1897. Constructed by Juan Mari’s  grandparents, the space was initially used as a wine inn and tavern. Juan Mari’s parents eventually took it over and converted it into a restaurant specializing in celebratory banquets.

In 1966, after completing his education and a stint in the military, Juan Mari returned to the kitchen where he grew up and began developing his signature cuisine alongside his mother, whom he credits as “the one that revealed all the secrets of gastronomy.” Under Juan Mari’s watch, Arzak became the first Spanish restaurant to earn three Michelin stars in 1989. Today, kitchen duties are shared between Juan Mari and his daughter Elena, and all three Michelin stars remain intact. 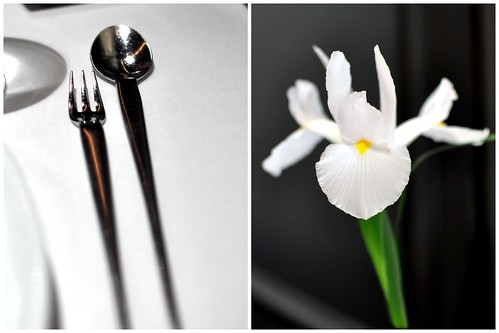 While the restaurant’s exterior is a bit dated, the interior is black, white, and modern all over. Each table was adorned simply with a single white iris. 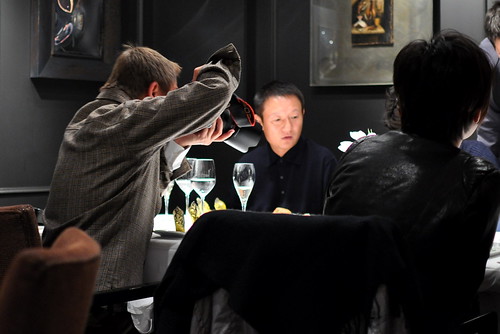 The “food paparazzi” were out in full force this evening. The Astronomer observed that every table in the room had at least one camera on it, including this guy, who packed a speed light and zoom lens to go with his humongous DSLR. For once in a very long time, I didn’t feel out of place snapping shots of each plate. At Arzak, it was the thing to do. 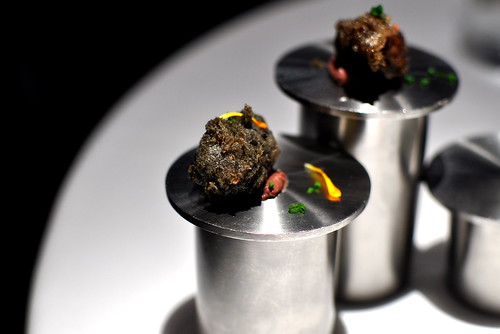 The Astronomer and I both ordered the menu degustacion (€155). Dinner started off with bread service (wheat and white served with Andalusian olive oil) and five small bites. The first to arrive were crunchy little black pudding nuggets resting on a miniature awards podium. I ate the second place nugget, while The Astronomer ate the first. As expected, they tasted the same. 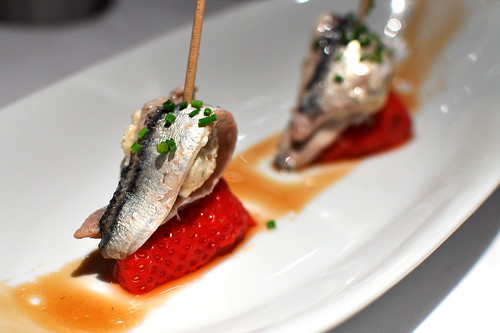 Soon after, we were presented with spears of anchovies and strawberries. Although the strawberries looked normal, their flavors were somehow concentrated, resulting in a flood of berry goodness in one small bite. 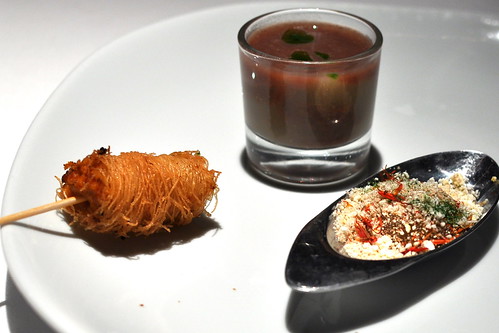 Next, a selection of tasty nibbles that included rockfish mousse wrapped in fried noodles, a dusty spoonful of mushroom and corn, and a shot of apple-laced red bean soup. 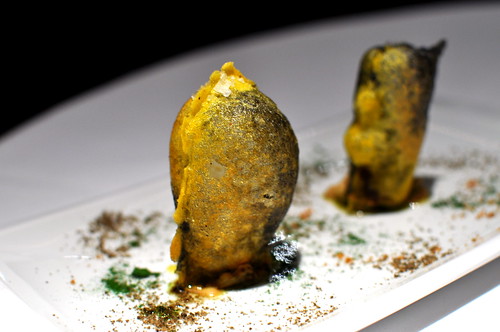 The first official course was beautiful to behold, but awkward to eat. The “cromlech” were crispy and hollow, with a filling of foie gras at the tip. Each piece was too large to eat in one bite, which resulted in shards strewn everywhere. When I did manage to get some in my mouth, it more or less disintegrated on my tongue and was gone before I could really get a sense of it. All that remained were colorful powders of tea, coffee, and onion. 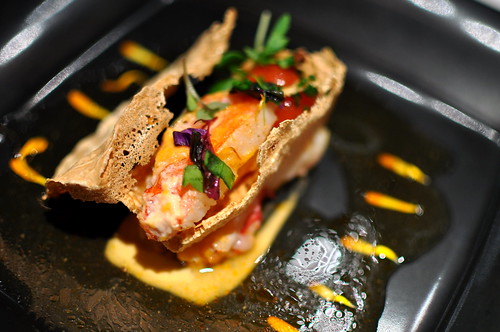 I was also underwhelmed by the lobster in a crispy potato shell with a cobaiba (Brazilian tree stem) sauce and a red pepper sphere. The lobster course is almost always my favorite on a tasting menu, but this one left me especially unimpressed. The lobster meat was wimpy and the accompanying flavors were unspectacular. 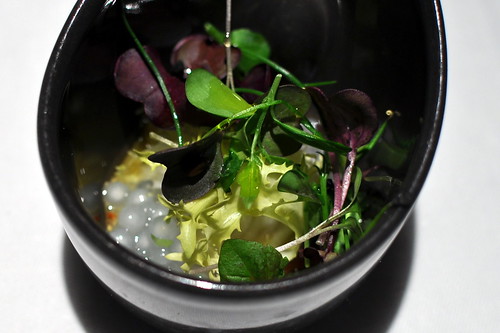 The lobster was served with a tapioca salad with seeded mustard vinaigrette. It was fine enough to eat, but didn’t seem to meld with the lobster’s flavors at all, which left me wondering why the two were even paired together. 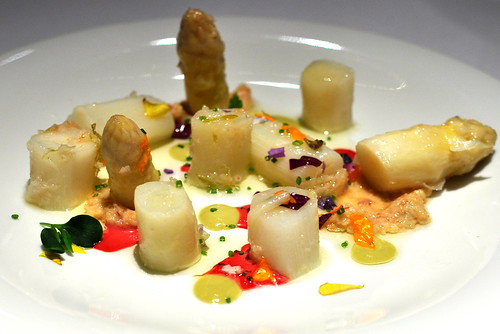 Slightly better than the preceding courses was an artful plate of white asparagus adorned with nut butter puree and several different mayonnaise. The asparagus’ fleshy texture was really something special. 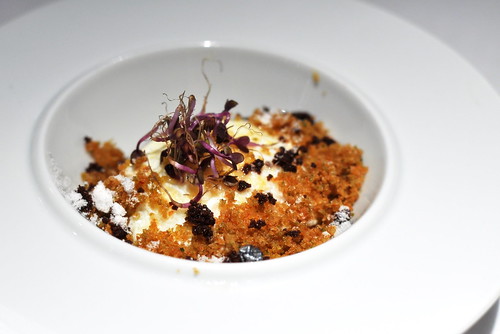 Served in tandem with the asparagus was an “egg with earthquake.” It consisted of a perfectly poached egg with breadcrumbs, tomatoes, olive oil powder, and mysterious silver mushrooms. As was the case with the earlier courses, it tasted very good, but struck me as too ordinary to be served at a place like Arzak. I came into the restaurant expecting bells and whistles at every turn, crazy flavor combinations, and molecular trickery. At this point in the meal, I was starting to wonder if I had it all wrong. 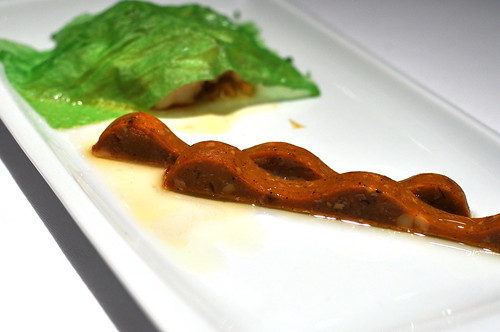 Next, a forcemeat “wave” made of crab roe, crab heads, tomatoes, and peppers that I thought tasted like bun rieu, a Vietnamese noodle soup made with crabs and tomatoes. 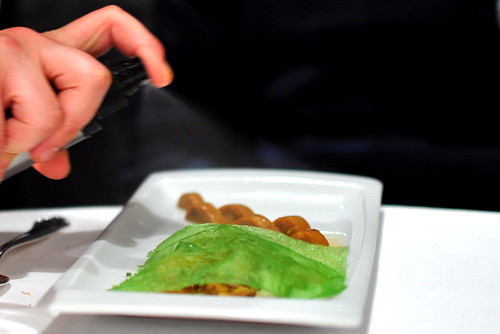 The “wave” was served with a neat pile of crab meat covered with barley “paper.” Our waiter sprayed an anise liquid that moistened the “paper” and imparted a licorice note.  Now, this was the kind of interesting presentation I was expecting from Arzak’s kitchen.  I wondered if the blanket draped over the crab was meant to symbolize something, but when we asked Adolfo, the English speaking maitre d’, why the crab was hidden beneath a sheet of edible paper, his response was simply that “the boss likes to cover things.” 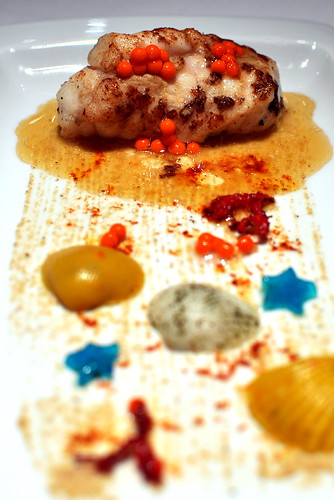 The crab course proved to be a turning point in my meal at Arzak. From then on, the kitchen’s creativity was riding high. The most beautiful plate of the night was the monkfish with mussels and nori flavored “shells,” tempura “seaweed,” liqueur “starfish” and crunchy red pepper balls. The chef’s edible interpretation of “low tide” was as cute as a button.  The white and black “shell” in particular was incredibly realistic.  Served on the side was a salty concoction of olive oil and peas, and hearts of palm. 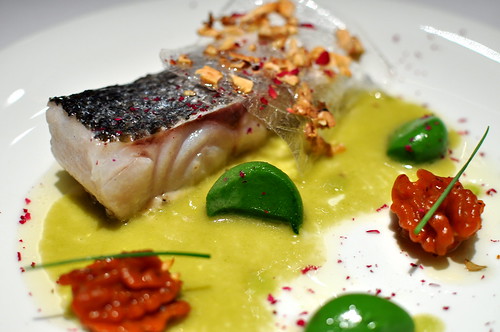 The seabass dish was just as playful and delicious. The gorgeously cooked fish was accompanied by spinach flavored “garlic,” paprika “walnuts,” sugary walnut brittle, and a garlic sauce. An extra piece of brittle was served on the side for good measure. 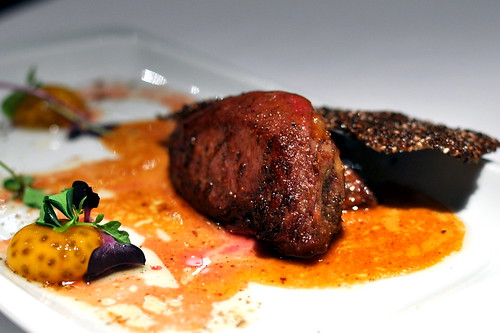 Moving onto the meat courses, we were served roasted pigeon with a Mexican chia seed cracker and chia spheres filled with broth.  Even though the pigeon didn’t taste particularly noteworthy, I was still amused because pairing a small bird with its favorite snack is pretty hilarious. I wonder if it was intentional. 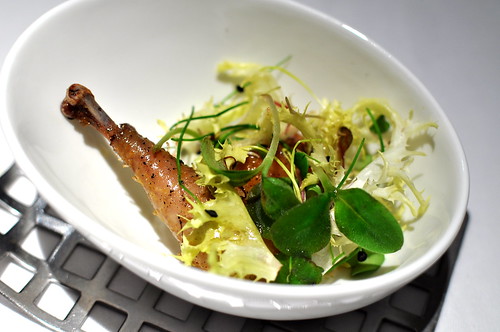 A pigeon leg with microgreens and frisee was served on the side. 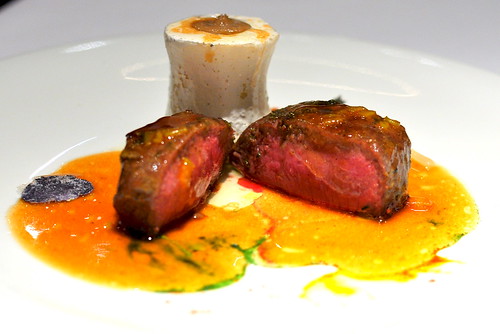 While the lamb in this next course was rockingly moist and flavorful, it was the “ossobuco” that really excited me. At first glance, the hollowed bone appeared to be filled with marrow. In actuality, it wasn’t a bone at all, but a potato confit piped with an onion and mushroom puree and painted in “ceramic” to resemble a bone! It was genius and really, really delicious. 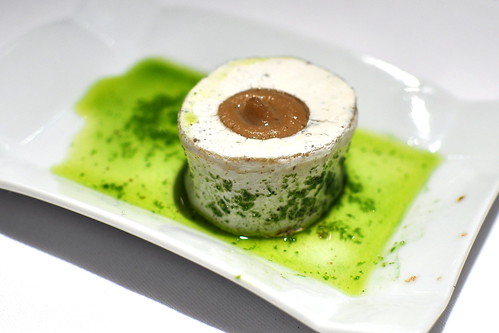 A second hollowed bone was served on the side in a pool of parsley oil. Thanks for reading my mind, Juan Mari. 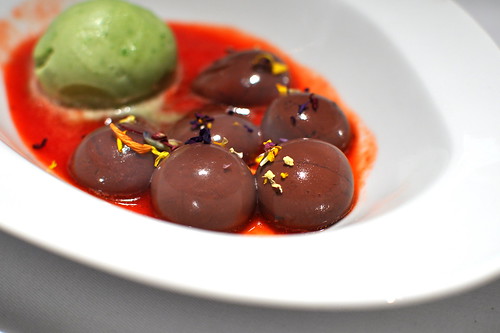 The Astronomer’s favorite sweet was comprised of warm liquid chocolate spheres swimming in a strawberry sauce with a scoop of basil sorbet. 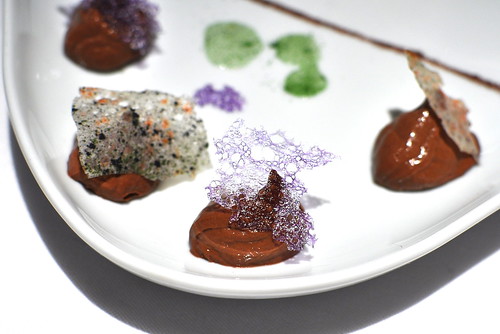 The second chocolate dessert melded sweet and savory flavors in unlikely ways. Dabs of chocolate mousse were paired with cinnamon, rosemary, and red cabbage flavored “crackers” that were paper-thin and sticky on the tongue. The red cabbage pairing was intriguing, but not all together successful. The cinnamon and rosemary, on the other hand, were great matches. A chocolate herb ice cream was served on the side. 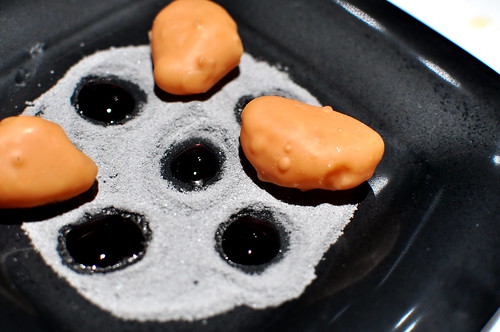 My favorite dessert resembled the surface of the moon. The lunar surface was made of a gray powder that was simultaneously sweet and salty, while its craters were filled with red wine. The caramel-encased meteors exploded with tart orange juice. A pineapple ice cream was served on the side. 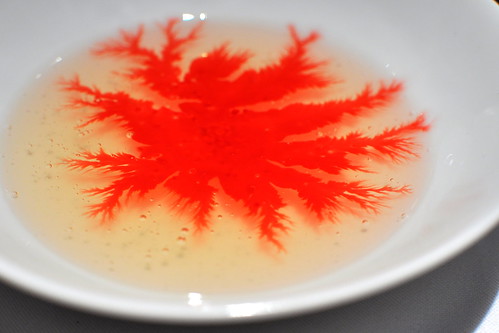 The Astronomer’s nerdy side was in for a treat when two liquids were poured together tableside to create a beautiful fractal design. 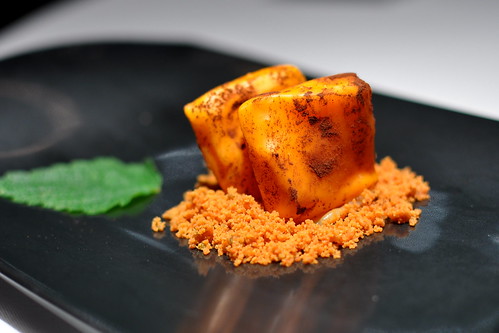 The final dessert was lemon curd-filled “cakes” made with cocoa butter and served with yogurt ice cream. 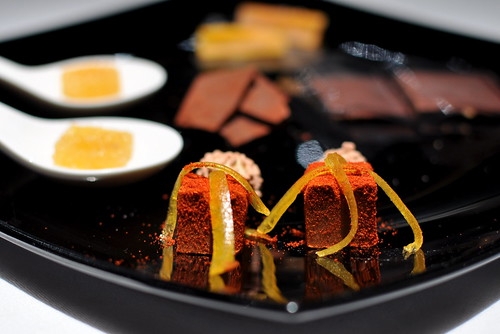 For their final flourish of the evening, the chefs sent out a plateful of mignardises—paprika fudge with passion fruit, sugar-coated pineapple gelees, white chocolate with beans, apricot paper stuffed with milky rice, chocolate with fried corn, and chocolate with caramel.

After such a mind-blowingly creative and delicious meal at Akelarre a few days prior, I was definitely let down by my experience at Arzak. I expected each course to knock my socks off, but the meal started slowly and never really managed to provide the onslaught of gustatory pleasure that I had been hoping for. While there were some fabulous courses, too many dishes were merely ordinary.

The Astronomer had a more positive viewpoint: while he agreed that Arzak wasn’t quite up to the level of Akelarre, it was still the second-most interesting meal of his life to date.  The desserts, often a weak point at fine dining restaurants, were phenomenal in both flavor and presentation, there were several amazing fish courses, and the life-like faux walnuts, garlic, bone marrow, seashells, etc. garnishing our plates were truly memorable.  What can I say—he’s a sucker for meteors.

Our days in San Sebastian passed by much too quickly. After dinner at Arzak, it was time to pack our bags for Madrid.