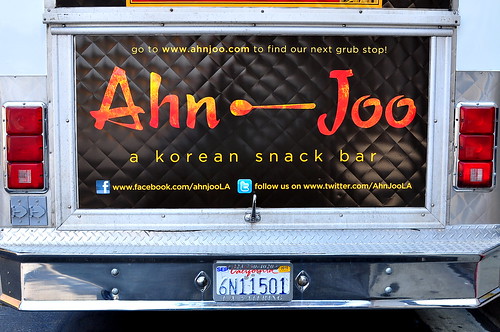 July 23, 2009—that’s the exact date when I fell in love with Korean rice cakes (duk). Since that deliciously chewy day at Cham Korean Bistro in Pasadena, I’ve eaten pounds upon pounds of the stuff and even successfully prepared an authentic version at home. Recently, an unofficial duk truck rolled into town. Chef Debbie Lee’s Ahn-Joo brings modern Korean pub grub to the streets of Los Angeles, including some bold renditions of my favorite rice cylinders.

The Astronomer and I chased down the truck yesterday afternoon at the CNN building on Sunset. Chef Lee was on the scene to greet us with a smile and to tell us more about why she decided to take her culinary act on the road. 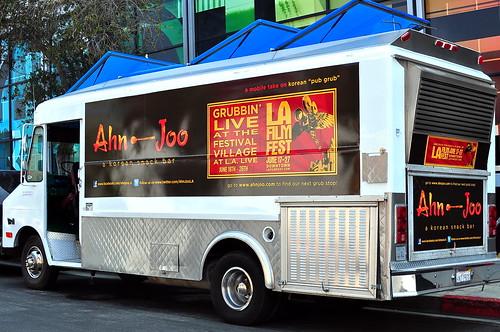 Following an appearance on season five of The Next Food Network Star, Chef Lee consulted at Culver City’s Gyenari and served “SeoulTown Tapas” at Breadbar. Although both engagements allowed her to introduce her unique style of fusion cooking to the public, the price point was ultimately too high to reach the masses. With Ahn Joo, Chef Lee hopes to spread her “Seoul-to-soul” dishes across the city and to provide an alternative to fast food. 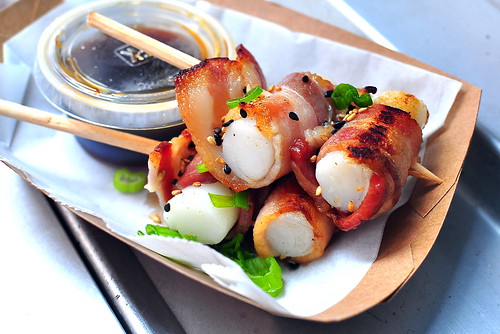 The menu is divided into four parts: Small Grub ($3), Medium Grub ($5),  Large Grub ($7), and Sweet Grub ($5). We began with an order of bacon-wrapped duk with jalapeño ponzu ($3). Bacon has a way of making just about everything better, and this was no exception. The smoky bacon and the citrus-laced ponzu provided the oomph that the simple rice cakes needed to shine. 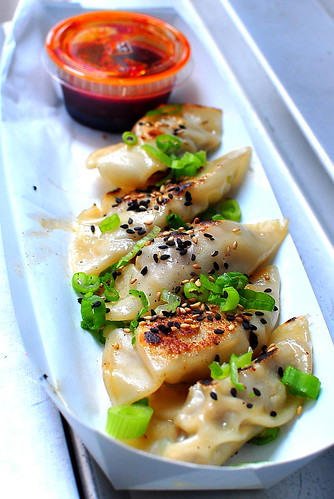 Next, we moved on to Modern Mandu ($5). The pork potstickers were pan seared to order and served with a zingy housemade chili pepper sauce. Chef Lee uses a family recipe that originated in a village in North Korea. What differentiates it from southern mandu is the filler-less filling. It was  straight-up porky, and we appreciated it very much. 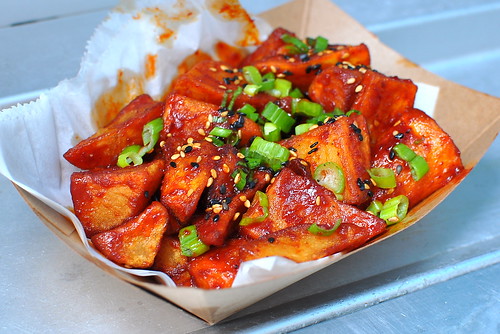 The Seoultown Spuds ($5), twice-fried garlic potato wedges drizzled in chili sauce, were texturally pleasing but too spicy and one-note for me. 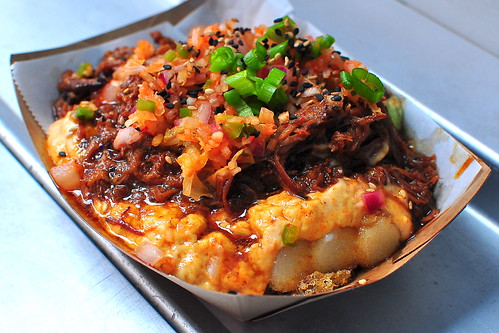 The dish that I was most curious to sample were the Korean nachos ($7) made with duk, four varieties of cheese, braised pork, and kimchi salsa. The first bite was good, the second one even better, but by the third bite, the avalanche of salt and grease proved too much for this sober eater to handle. I recommend ordering one of these and sharing it with five drunken friends. 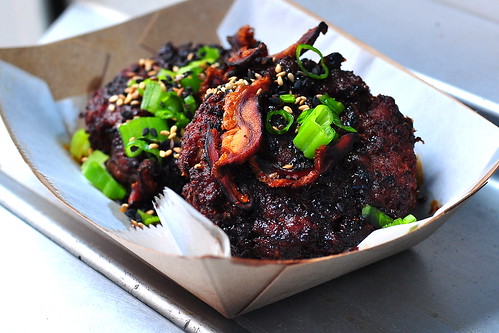 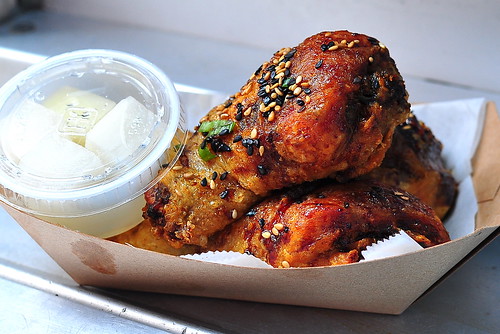 Our final savory selection was Korean fried chicken with pickled daikon ($7). The texture of the double-fried drumsticks was spot on, while the flavors were more subdued than the soy-garlic and hot-spicy specimens at Kyochon. 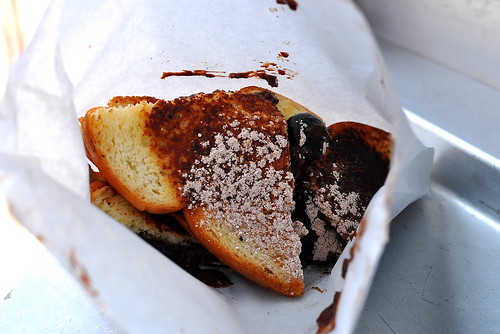 For dessert, grilled Nutella bhang with blueberries ($5). A little fruity and a lot chocolaty, this sandwich hit the sweet spot. 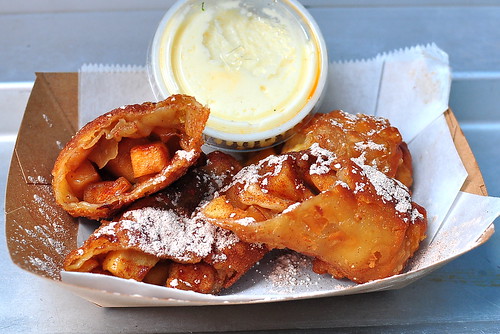 And lastly, freshly fried Fuji apple egg rolls ($5). The egg rolls were a cinnamon-lover’s dream, and the accompanying ginger, cream cheese, and mascarpone dipping sauce made them even better. Make sure to save room for dessert!