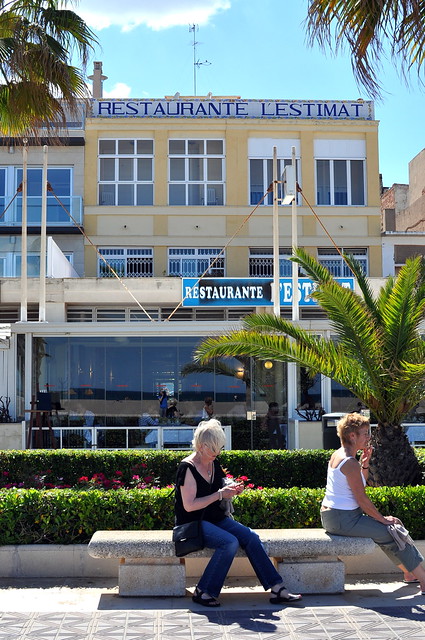 Paella is arguably Spain’s most famous dish. Prior to traveling to the Iberian peninsula, I was only familiar with the classic version that’s flavored with saffron and flourished with shellfish (paella a la marinera). Early on in our trip, my notion as to what paella entailed was turned on its head. While at  Taverna El Glop in Barcelona, The Astronomer and I shared one made with rabbit and snails (paella Valenciana). I also read in our travel guide about an intriguingly black version made with squid ink. Upon arriving to Valencia, paella’s original stomping grounds, The Astronomer and I were eager to further familiarize ourselves with this one pan wonder. 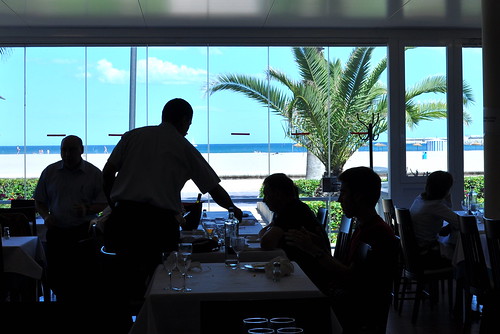 We had read great things about Restaurante L’estimat and ended up eating there twice during our short stay. Located on the Paseo Maritimo, the restaurant is a few steps away from the beach and offers a postcard-worthy view. 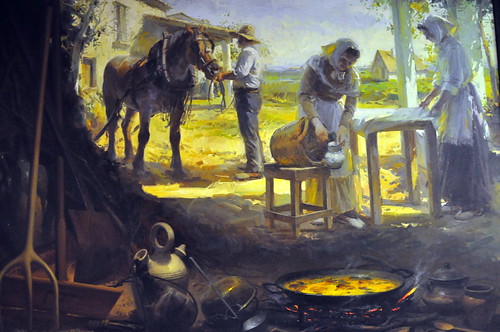 I wouldn’t normally bore one with a historical account of paella, but this romantic painting, which hangs toward the back of the restaurant, has inspired me to do so. Or better yet, I’ll let Saveur do the talking:

The dish exists because of rice, and rice has existed in Valencia and its environs ever since the Moors planted it there more than 1,300 years ago, in a lagoon called the Albufera, where the grain is still grown today. Saffron, that precious and earthy spice, brought to Spain by Arab traders in the tenth century, was the Moors’ preferred seasoning for rice, and it remains a traditional paella ingredient. Local game like rabbit, and foraged foods like snails, as well as various legumes and vegetables, found their way into rice dishes during the Moorish occupation of Spain, but pork (which was prohibited under Muslim dietary laws) and shellfish did not. The dish was prepared in the countryside over an open fire of dried vines and orange-tree branches, usually on Sundays, usually by the men of the family while the women were at church. 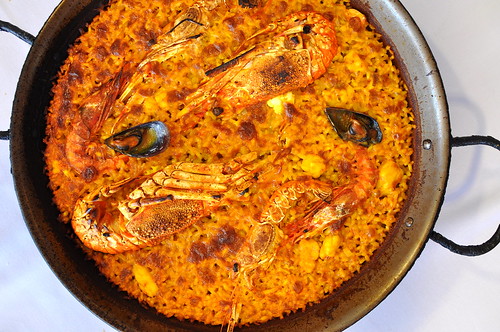 Being steps away from the gorgeous Mediterranean coastline, I couldn’t help but order the paella a la marinera. We chose the most deluxe option with langoustines, mussels, calamari, and head-on shrimp. Since each pan is made to order, we waited nearly forty minutes for ours to arrive. The wait was torturous. 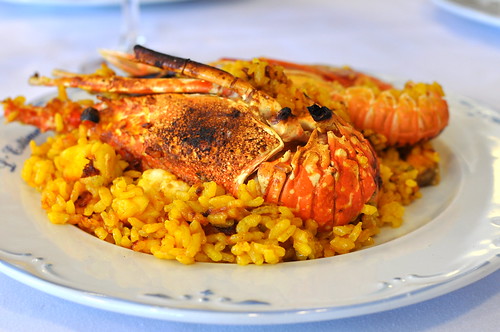 At L’estimat, every pan of paella is presented to diners tableside, and then taken to a service table to serve. Our waiter dished out two equal portions and presented it on fine white China to us. It ‘s a good thing that a third party divvied up the goods because I surely would’ve grabbed up an extra langoustine for myself.

As expected, the seafood was impeccably fresh and succulent, while the rice was fluffy and golden-hued. My favorite bites included a bit of the crusty, charred rice from the bottom of the pan…along with a huge hunk of lobster tail. 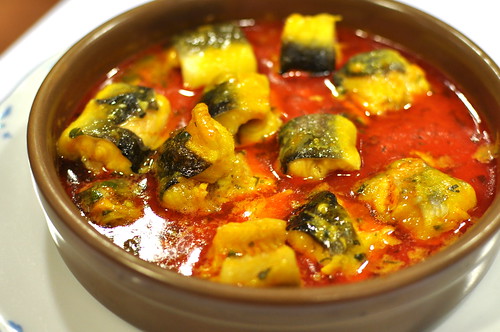 The Astronomer and I returned to L’estimat on our final night in the city for one last paella fix. We started dinner off with an order of all i pebre, a dish virtually unknown outside of Valencia that is comprised of eel, potatoes, garlic, and chili peppers cooked in olive oil. The chunks of eel were buttery and rich. We sopped up the decadent sauce with bread. 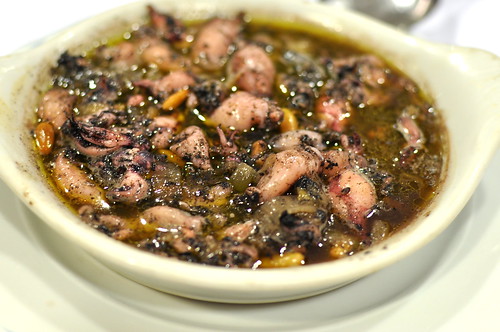 We also shared an order of baby squid bathed in a garlicky sauce with toasted pine nuts. The squid was wonderfully tender, like only a baby could be. 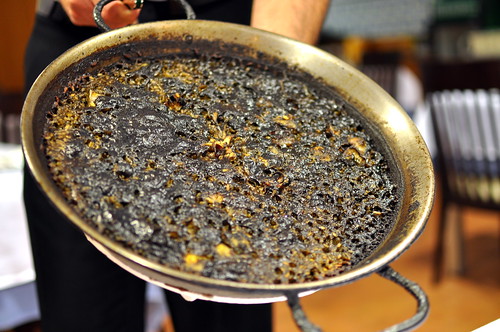 The finale was a pitch-black pan of arroz negra made with squid and its ink. The color was slightly off-putting, but I had an inkling that it would taste delectable. 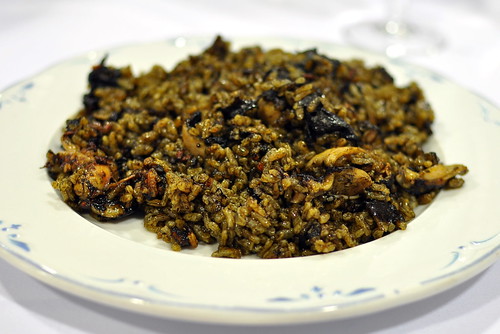 My intuition was totally on point because the arroz negra was even more spectacular than the paella a la marinera and paella Valenciana. The combination of garlic, saffron, and squid ink mingled together harmoniously, delivering a hearty and nuanced dish. A boat of aioli was served on the side for dipping.