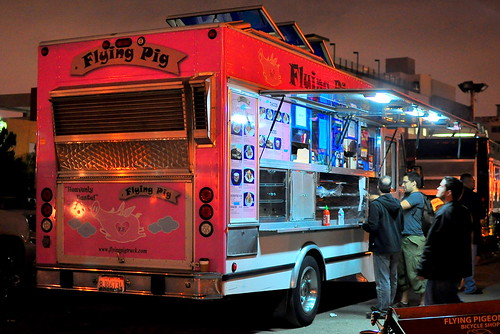 After a round of deep-fried sushi, followed by Korean-flavored balls, The Astronomer and I made one last stop at the pretty in pink Flying Pig truck before calling it a night. Flying Pig hit the mean streets of Los Angeles last October, which in truck years seems like a lifetime ago. Even though it’s been around for a while and has been well received by diners, our paths and appetites never crossed until tonight. 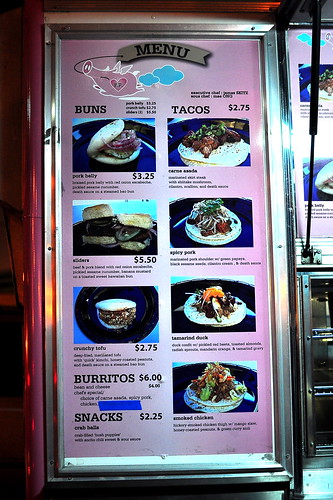 The two dudes behind Flying Pig are Joe Kim and James Seitz, culinary school grads from the California School of Culinary Arts in Pasadena. Taking a cue from the truck that started it all, Flying Pig’s menu blends Asian and Pacific Rim flavors with French technique. Back when the truck first launched, owner Joe Kim informed the L.A. Weekly that Flying Pig was a testing ground for Butalanai, a restaurant that he planned to open in early 2010. While a brick and mortar joint has yet to come to fruition, the Flying Pig continues to do its porky fusion thing all around town. 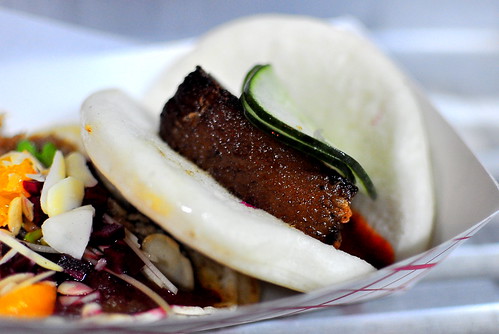 Ripped straight out of the Momofuku playbook, the pork belly bao ($3.25) was braised to melt-in-my-mouth perfection. The red onion escabeche and pickled sesame cucumber provided enough tang to keep the pork’s fatty richness at bay. The truck’s signature “death sauce” wasn’t exactly deadly, just spicy with a touch of hoisin. The bao was one of the tastiest dishes I’ve eaten from a truck. The Flying Pig’s crunchy tofu bao ($2.75), which I tasted on a different occasion, is a great option for those with meatless leanings. 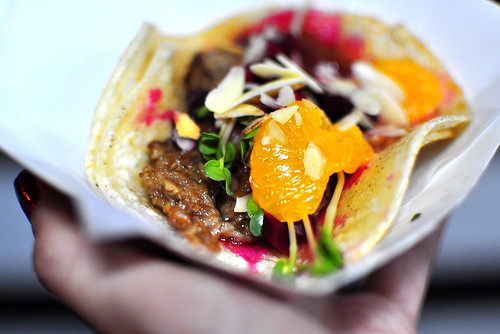 Grazing from truck to tuck at Art Walk is always a blast and has become a monthly ritual for us. Until we grow tired of eating dinner on our feet, we’ll see ya at the next one!