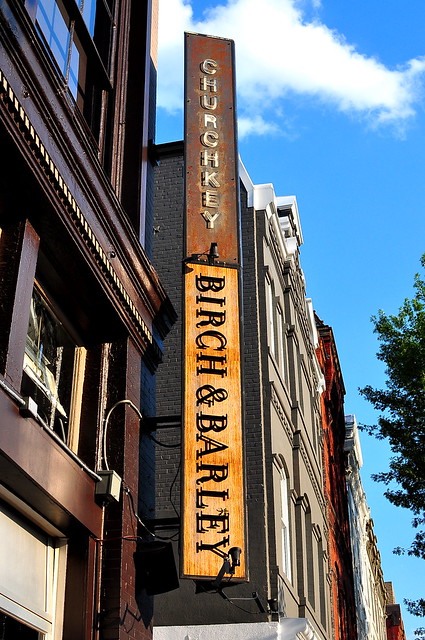 Birch & Barley, a ground-breaking D.C. restaurant dedicated to artisanal beers, was the site of our second dinner in the city. I was a bit nervous about dining here because truth be told, I don’t like beer. Try as I might to embrace the sudsy stuff, beer and I just haven’t grown very tight over the years. In fact, there’s only been one brew in my experience that didn’t elicit a bitter face—La Fin Du Monde, a champagne-like beer from Québec.

Even though I haven’t had the best experiences with beer, I came here with an open mind and a willing palate. This evening, our group indulged in a tasting menu ($55) with beer pairings ($22) orchestrated by Chef Kyle Bailey (Cru, Blue Hill at Stone Barns, Allen and Delancey) and beer director Greg Engert. Bread service and sweets were masterfully handled by Chef Tiffany MacIsaac (Cru, Union Square Cafe, Allen and Delancey). 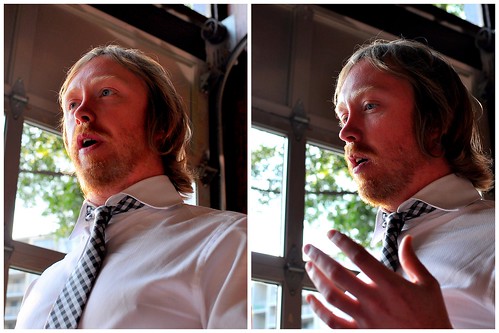 Mr. Engert, who was recently named by Food & Wine magazine as Sommelier of the Year, was on hand to expertly guide us through the evening’s libations. He came to our table at the beginning of each course to introduce the beer pairing, telling us about its history, origin, and distinctive qualities. His immense and intense passion came through with each delivery, inspiring me to give every beer a fair shake and to appreciate its craftsmanship. We sampled a lot of beers throughout the course of the night, but it barely made a dent in the 555 artisanal brews (500 in bottles, 50 on tap, five cask-pumped) that Birch & Barley sources. 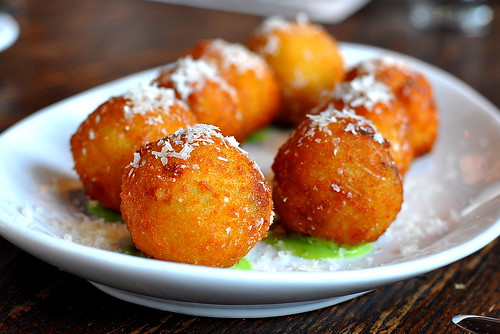 Before the official tasting began, a series of light appetizers arrived to amuse our bouches. These were paired with a thoroughly delightful ale brewed with raspberries from Italy called Rubus. The first bite were arrancini, fried risotto balls with peas, prosciutto, mint, and Fontina. The panko crust was just about perfect. 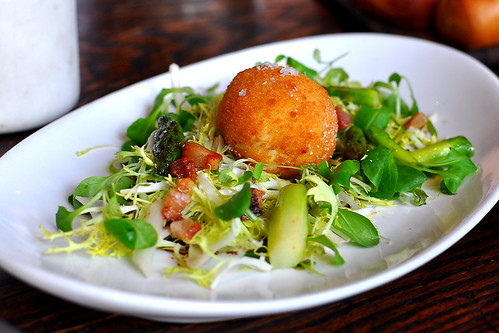 We also shared a beautiful salad with house-made pancetta, asparagus, balsamic, and frisée. The centerpiece was a soft-boiled crispy duck egg with the most luscious runny yolk. 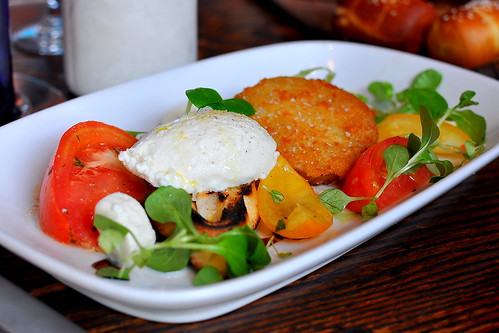 At the request of tomato-lover Olga from Mango Tomato, a seasonal panzanella tomato salad arrived as well. It was comprised of heirloom tomato slices, a fried green tomato, grilled toast, and burrata. The plate was bright and fresh. 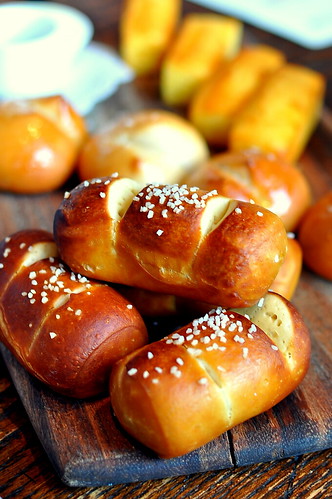 The tasting menu officially began with a plank of Chef MacIsaac’s house-made breads. It included pretzel rolls, Kalamata olive bread, and miniature loaves of sweet cornbread. The warm pretzel rolls paired with whole grain mustard were unbelievably great. I tried to hold back knowing that I had an entire tasting menu ahead of me, but ’tis impossible with pretzel bread this awesome. 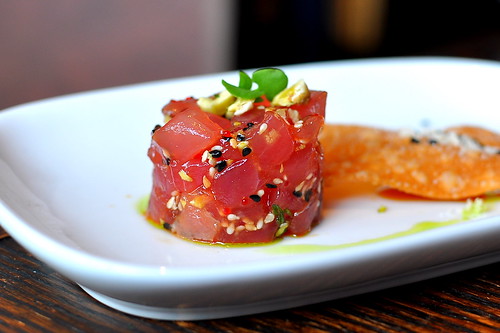 The first course was an ahi poke tartare seasoned with a soy-mirin dressing, Alaea salt, and ginger. It was accented with a crisp wonton chip and sesame powder. Prepared with wonderfully fresh fish and deftly seasoned, I liked the poke very much. Mr. Engert paired it with Monk’s Cafe Flemish Ale from Belgium. 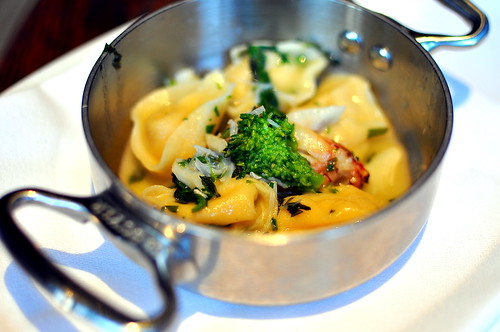 Next, we dug into tortellini filled with sweet local corn, accompanied by Dungeness crab and broccoli rabe. The handmade pasta was outstandingly executed, carefully made and cooked till al dente. This course was paired with Hochland Bio Honig Bock from the honey producing region of Austria. 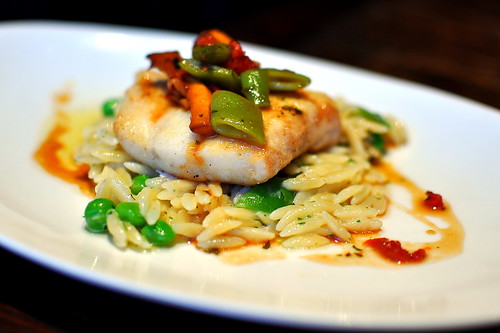 The Pacific halibut was well prepared, but it didn’t have me swooning because I tend to favor raw fishes over cooked ones. The bed of orzo, on the other hand, was totally up my alley. What made this orzo extra special was the mascarpone cheese and veal stock that it was cooked in, and the tomato concasse, chanterelles, Roma beans, and English peas dotting it. This course was paired with Stateside Saison from Maryland made with New Zealand hops. I noted that it was a “yummy beer” in my pad. 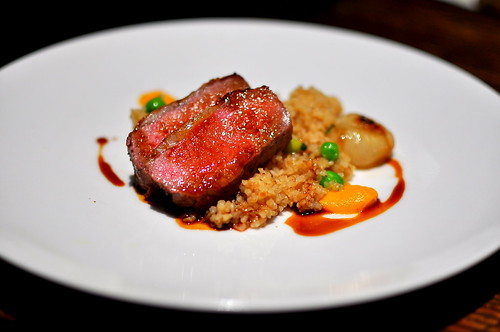 The final savory course was a roasted spring lamb served with bulgur wheat, grilled cioppino onions, asparagus, and a curried carrot puree. The lamb was perfectly cooked and tasted just as it ought to—unabashedly earthy. It was paired with Moonraker ale from England, which was much too funky and strong for my palate. 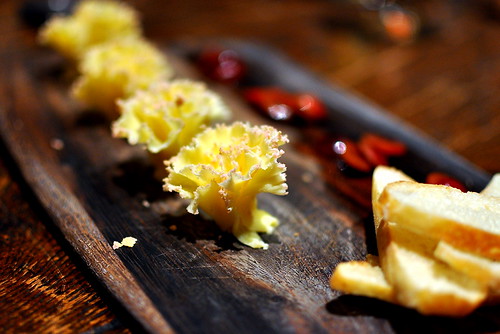 The cheese course (supplemental $5) was a Swiss raw cow’s milk cheese called Tete de Moine (“head of the monk”). It was served with pickled cherries and honeyed walnuts. I’m kind of mild mannered when it comes to cheeses, so I found the musty flavors of this one off-putting. The cheese was paired with Jan de Lichte from Belgium (supplemental $6). 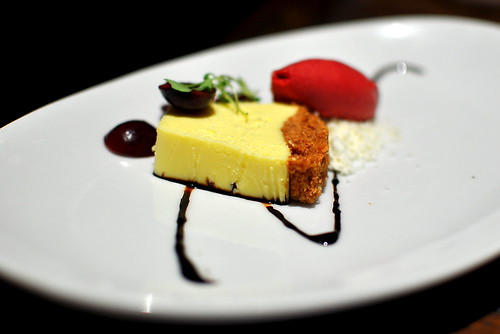 The final course of the evening was a goat’s milk cheesecake with a cherry-black pepper sorbet, Bing cherries, olive oil dust, and balsamic reduction. The cheesecake tasted extra tangy due to the goat’s milk and splash of creme friache. The accouterments brought balance to the plate. The last beer pairing was Aventinus from Germany.

I left Birch & Barley positively sated, and with a much better understanding of my personal preferences for beer. After all these years of thinking that beer just wasn’t for me, it was really great to taste a slew of brews that I enjoyed. It turns out that I like my beers light, fruity, and sweet. Craft beers are where it’s at! Thanks, Mr. Engert.