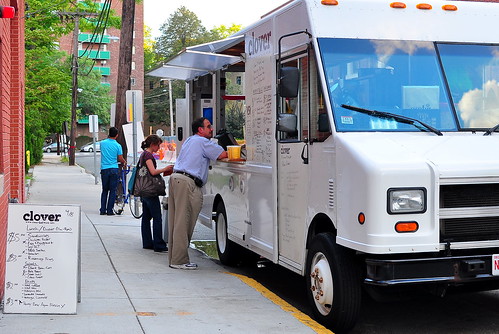 In early September, the Astronomer and I spent a week in Boston visiting friends and family. Whereas our previous travels were centered around eating and lots of it, this trip was about reconnecting with loved ones whom we don’t get to see nearly enough. While this trip wasn’t as food-centric as those in the past, we still managed to eat very well. After all, catching up with old friends is best accomplished over a long and delicious meal.

One of our most memorable dinners was eaten street side at the Clover Food Lab, a bright white vegetarian food truck parked on MIT‘s campus. The truck was founded by MIT graduate Ayr Muir. After earning an MBA from Harvard, he worked in marketing at Patagonia and as a consultant with McKinsey and Company. In 2008, he decided to leave the corporate world behind for new challenges in the culinary field. 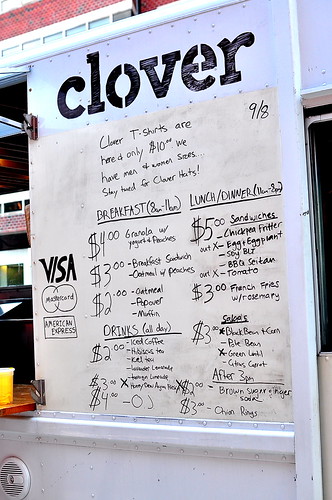 To make his dream a reality, Muir teamed up with Chef Rolando Robledo (@RolandoRobledo), a one-time poissonnier under Thomas Keller at The French Laundry and an instructor at Johnson & Wales University. Together, they created a temporary “food lab” out of a truck to test recipes for a soon-to-be launched chain of vegetarian restaurants. The truck opened for business on MIT’s food lot in September of 2008 and closed down seven weeks later as planned. However, customer protests made the two reconsider their initial plan. The truck reopened in March 2009, and they have since expanded to two trucks.

By the way, I read in an article on MIT’s campus news site that the truck’s exterior pays homage to Muir’s MIT past. It features a dry-erase board menu, which Muir says reminds him of the problem sets he faced as a student. I ♥ nerds. 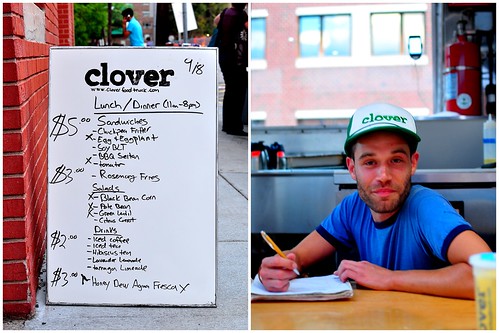 The Clover truck, which runs on biodiesel (a fuel made from used vegetable oil), serves moderately healthy, meat-less fast food fare with a focus on seasonality and locality. 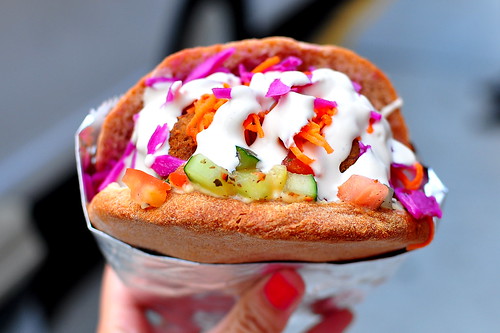 One of the truck’s signature sandwiches is the chickpea fritter ($5), which is comprised of falafel served in a whole wheat pita with hummus, a cucumber and tomato salad, pickled red onions, cabbage, and carrots, and tahini. According to Edible Boston, the chef drives down to Brooklyn once a week to pick up the whole-grain pitas that are the basis for every sandwich.

Stuffed to the brim with fresh vegetables, flavorful sauces, and crisp falafel, the chickpea sandwich was a delight. The pita was sturdy enough to hold everything together in a neat package from start to finish. 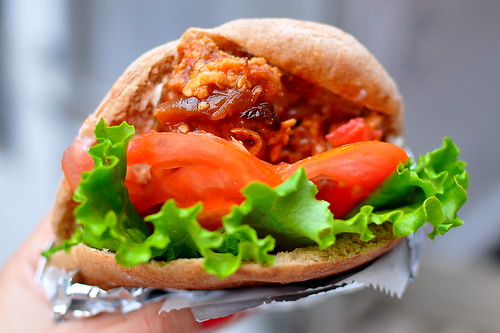 Another winner was the BBQ seitan sandwich ($5). While not the most photogenic specimen, this saucy faux meat creation was definitely tasty, especially for a wheat gluten fan like me. 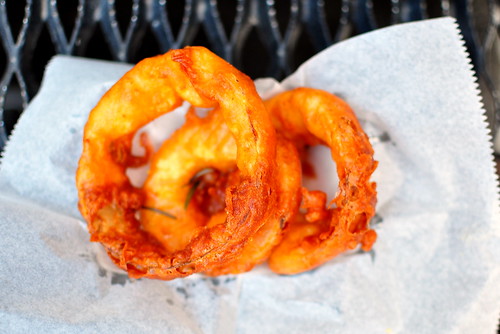 We also ordered some beer battered onion rings ($3), which had a light and airy exterior. As an unexpected bonus, the rings had a mild rosemary essence because they were fried in the same oil as the rosemary fries. 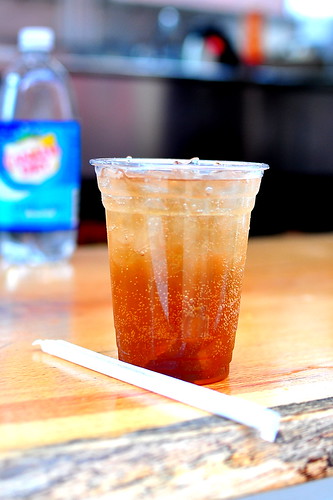 To wash everything down, a made to order ginger beer ($3). It was fizzy, refreshing, and even a little spicy. Zig-a-zig-ah!

Both Clover trucks are open Monday through Friday from 8 AM to 7 PM. For the best selection, be sure to arrive early. For daily specials, follow the truck on Twitter (@cloverfoodtruck).