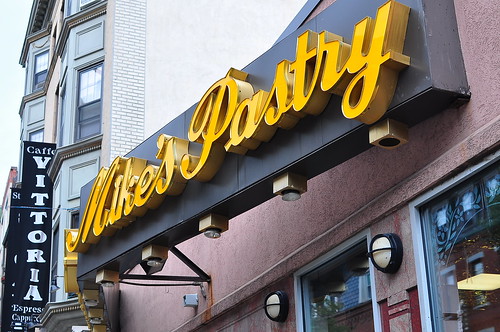 Following our spectacular seafood lunch at Neptune Oyster, The Astronomer, Rosalind, and I walked to Mike’s Pastry for dessert. While it is considered something of a tourist trap by the local set, a trip to the North End didn’t seem complete without a cannoli fix to finish.

I breathed a sigh of relief as we approached the store and saw that there wasn’t a line snaking out the door. As one of the city’s most popular cannoli purveyors, along with Modern Pastry down the street, Mike’s is usually chaotic at all hours of the day. Thankfully, that wasn’t the case this afternoon. 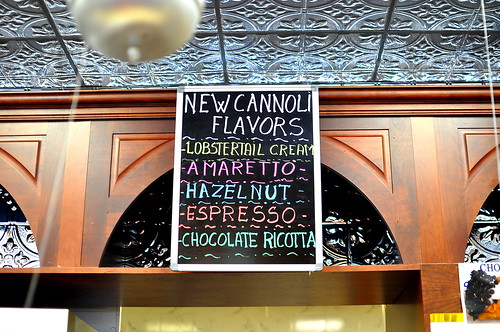 The shop sells everything under the sugary sun from pies to cakes to cookies. There’s even a selection of  precious little fruits made of marzipan. A few treats on display had our eyes and stomachs wandering, but we stuck with our initial game plan.

At Mike’s, the classic Sicilian pastries come piped with either ricotta cheese, custard, or chocolate cream, while the deep-fried pastry shells are either left plain, dipped in chocolate, or crusted with peanut brittle. A number of special fillings were also available on our visit including lobstertail cream, amaretto, hazelnut, espresso, and chocolate ricotta. Somehow, we managed to agree on one flavor from the bevy of permutations available. 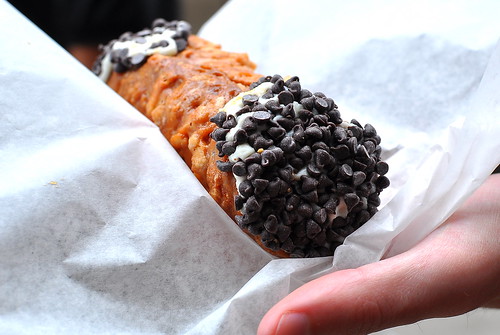 The Florentine ricotta cannolo consisted of a candied peanut brittle shell filled with sweet ricotta cream and accented with mini chocolate chips. The pastry seemed like a perfectly fine choice based on its appearance, but after a few bites, all three of us were completely overwhelmed by its unrelenting sweetness. Furthermore, the double punch of chocolate chips and peanut brittle drowned out the filling’s subtle flavor. It was a swing and a miss. 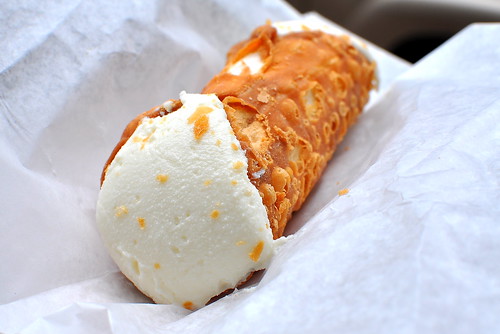 Although we didn’t plan on ordering a second cannolo, it was absolutely necessary after the first one failed us. This time around, we kept it simple and chose a plain shell filled with ricotta. This combination didn’t hit it out of the ballpark either, but it was more palatable than the last one and gave us a truer sense of what a cannolo entailed. All three of us agreed that we would’ve warmed up to the pastry a bit more had it not been so large. I appreciate a sugar rush as much as the next gal, but these giant cigars were too much even for me.

I was a tourist. And I walked into a trap. Oh, well.