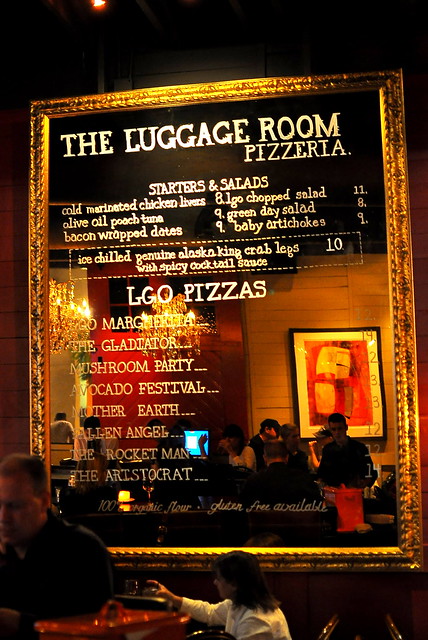 When I heard that Pasadena’s La Grande Orange Cafe was opening up a pizzeria next door, I hoped and prayed that it would rival Pizzeria Mozza, or at least Pitfire Pizza. I’ve become something of a pizza gal since my epiphany at Serious Pie in Seattle and thought it would be grand to have one the city’s best pizzerias a stone’s throw away from home.

After giving The Luggage Room a month or so to find its bearings, I came in for dinner along with my friend Ben and his cousin Hyo. Even though reservations weren’t accepted, our party of three managed to score a table straightaway during peak hours on a Friday night. By the way, the restaurant relies on diners to seat themselves, so all empty tables are up for grabs. 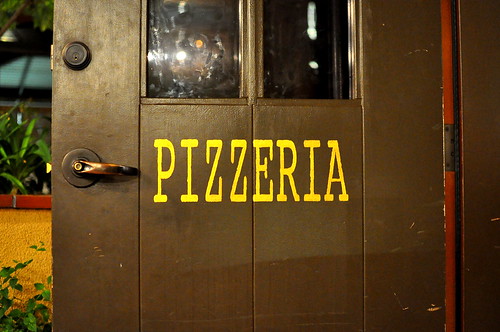 Housed in the former luggage room of the historic Santa Fe Train Depot, the pizzeria had a great vibe that fit in nicely with the neighborhood. The space is dominated by a central bar and an open kitchen that showcases the wood-burning oven. 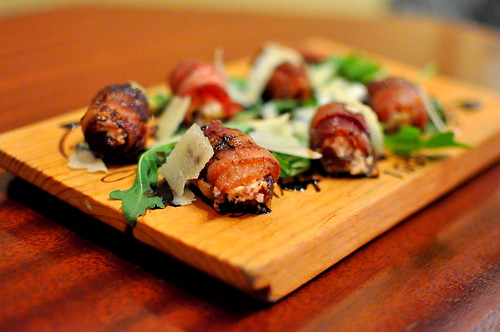 To start, Ben and Hyo insisted on an order of bacon-wrapped dates with goat cheese ($9). The hot little morsels arrived on a wooden slate accented with arugula and shards of Parmesan. My dining companions are bacon-wrapped date connoisseurs and declared these specimens inferior to the ones served at Cobras and Matadors. Their chief complaint was that the bacon wasn’t crisp enough.

I found the bacon-wrapped dates pleasant enough, but then again, I’d probably eat just about anything wrapped in bacon. 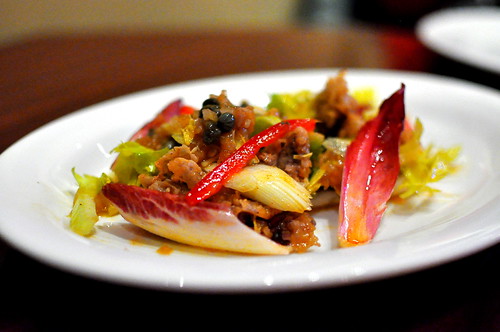 I requested the marinated jidori chicken livers ($8), which were served with a lightly dressed salad of capers, bell peppers, red endive, and frisee. I expected the livers to be served cold based on the menu’s description, but didn’t expect them to be lightly battered and fried. Biting into a frigid liver with a compromised crust was straight-up unpalatable—fried foods served soggy are one of the saddest things ever.

I voiced my complaint about the livers to our waiter and the chef when they stopped by our table, so hopefully freshly fried livers will be served piping hot in the near future. 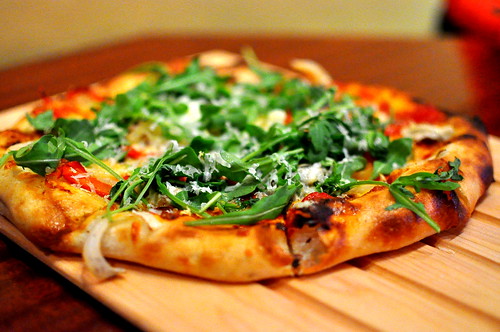 Halfway through our appetizers, the pizzas arrived. The first on the table was Hyo’s Aristocrat ($14) with white anchovies, Fresno chilies, lemon zest, and arugula. She topped the pie with an egg at no extra charge. While Hyo was overall quite pleased with her selection, I was disappointed that the anchovies didn’t pack more punch and that the egg was overcooked. We both agreed that the tangy, blistered sourdough crust swathed in olive oil was a solid effort. 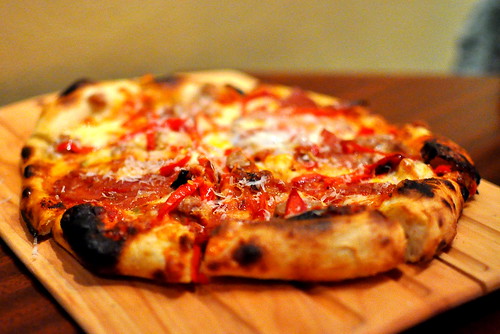 Ben’s Gladiator ($14) pie, which came topped with spicy Italian sausage, Salumeria Biellese pepperoni, tomato sauce, and gratis chilies and egg, was my favorite of the night.  The toppings were as flavorful as I had hoped for and the crust spoke for itself. 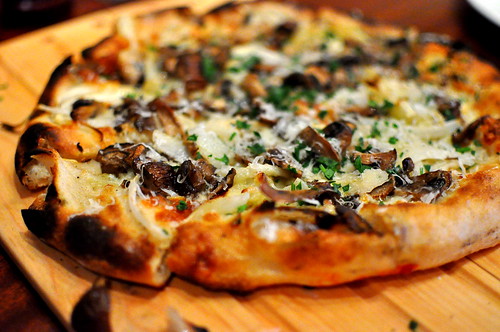 I chose the Mushroom Party ($13) pizza, which came strewn with crimini and oyster mushrooms, onions, and fennel. It was a disappointingly bland little number that failed to deliver the party I was promised.

Looks like I’m gonna have to keep traveling west to satisfy my pizza cravings. Shucks.