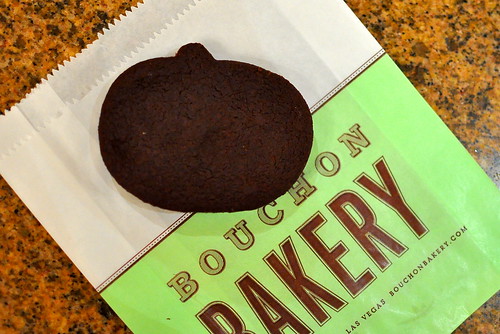 After lunching at Lotus of Siam, The Astronomer and I explored two new additions to the Las Vegas strip—the City Center and the Aria Resort and Casino. It seems to me that Vegas developers will not sleep until every casino has its own Gucci outlet and Wolfgang Puck eatery. What a yawn. After walking nearly the entire length of The Strip, The Astronomer and I were due for an energizing snack. We stopped by Bouchon Bakery located inside The Venetian for a quick pre-dinner bite. 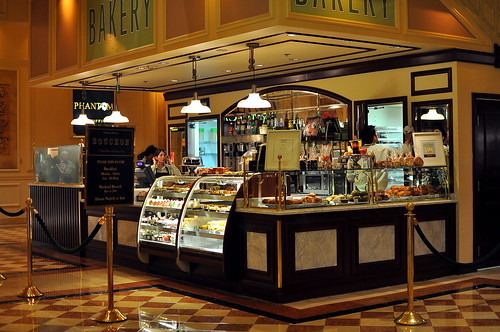 While I’ve eaten at Thomas Keller’s The French Laundry and Ad Hoc, this was my first time visiting his Parisian boulangerie-inspired bakery. Tucked beside the theater and steps away from the casino floor, Bouchon Bakery’s atmosphere was decidedly uninspiring. The air smelled of cigarette smoke mingled with air conditioning, and not a trace of the aroma of freshly baked pastries could be detected. Considering the resources available at a casino like this, the bakery felt more like an ordinary snack bar than a temple of baked goods. On an upbeat note, I really dug The Phantom of the Opera tunes piping out of the speakers. I bet they don’t have that in Yountville! 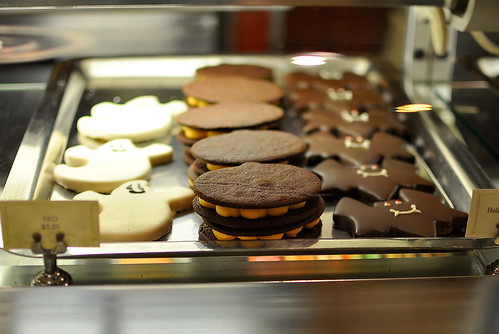 Since it was Halloween weekend, quite a few of the treats were dressed up in holiday garb. I picked out a pumpkin-shaped TKO—Thomas Keller Oreo ($3.25). According to the bakery’s website, Oreo cookies are one of Thomas Keller’s favorite snacks. His upscale version employs a chocolate sable cookie dough and a white chocolate ganache filling.

The Keller-fied Oreo was a total knock out. The cookie’s texture was spot on, while the cream was appealingly smooth. A slight touch of salt kept the Oreo’s sweetness in check. If there’s one thing that Thomas Keller is known for, “it’s all about finesse.” 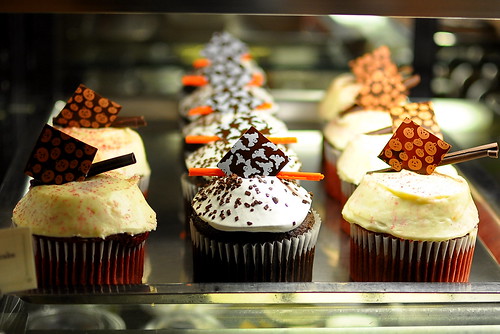 To supplement the Oreo, The Astronomer and I shared a red velvet cupcake ($3.50). It was one-and-a-half times the size of regular cupcake, but somehow, we managed to polish off the entire thing. While I was prepared for an in-your-face punch of sugar, the cupcake was surprisingly well-balanced, even with a tunnel of cream cheese frosting running down the center. Bravo!

So, while Bouchon Bakery’s ambiance didn’t do much for me, its cookies and cupcakes more than made up for it. Ah, the magic of Vegas.