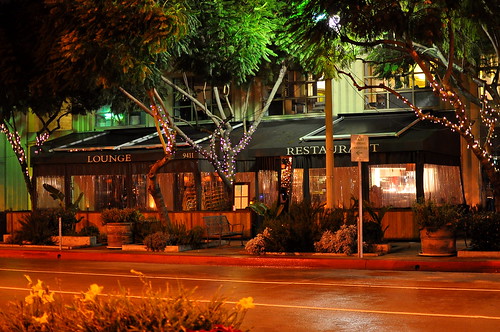 Ben Bailly, one of my favorite chefs in Los Angeles, recently left his post as the executive chef of Petrossian in West Hollywood to helm the kitchen of Frîache in Culver City. Chefs move up the ranks and change jobs every day in L.A., but rarely do I feel compelled to check out their new digs straightaway. However, with Chef Bailly things were markedly different.

Chef Bailly is something of a culinary darling among me and my food blogging comrades. Aside from being a very good chef, he always goes above and beyond to make us all feel like our sites, photos, and commentaries are more than just silly hobbies. This mutual respect between diner and chef has garnered him a fiercely loyal following, myself included. It’s kind of amazing how far a little kindness will go on the Internet. [Take note, Red Medicine.] 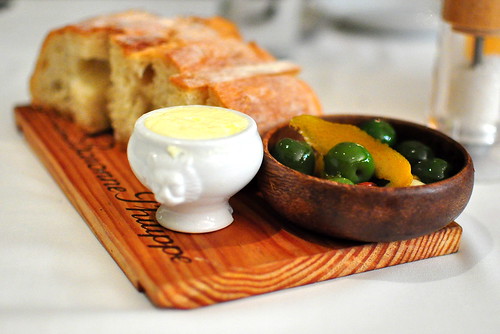 The Astronomer and I, along with the lovely Diana Takes a Bite, dined at Fraîche a month after Chef Bailly took over the kitchen and revamped the rustic French and Italian menu. Diana arrived moments before we did and was sipping on a cool glass of wine when we greeted her at the table. She was careful not to nibble on the bread, butter, and olives until I had taken a proper photo. Whatta gal! 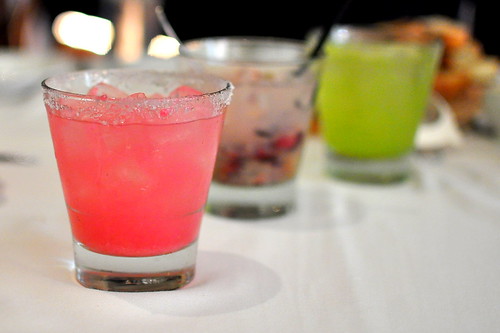 Even though we were planning on a booze-free meal, sommelier Paul Sangoletti insisted on providing cocktails and wine pairings for our party. We started off with three market-driven libations featuring (left to right) beets, red grapes, and basil. The grape-infused concoction with vodka and elderflower syrup was too strong for me, but the ones with beets and basil were just right. Sipping on seasonal cocktails makes drinking feel so virtuous! 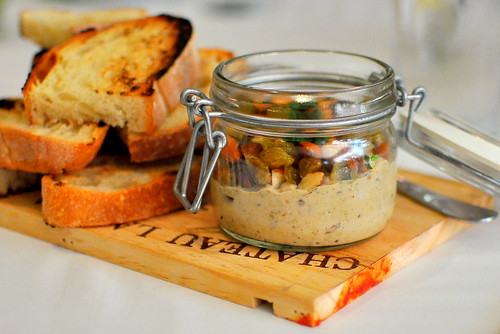 The first course to arrive was the Eggplant Caviar ($8) topped with raisins, marcona almonds, and chives. The spread was accompanied by a stack of toasted bread. While my vegetable-loving dining companion was up in the jar’s grill, The Astronomer and I each had a single serving. The chunky eggplant spread was perfectly nice, but with fourteen courses on deck, we had to eat strategically. 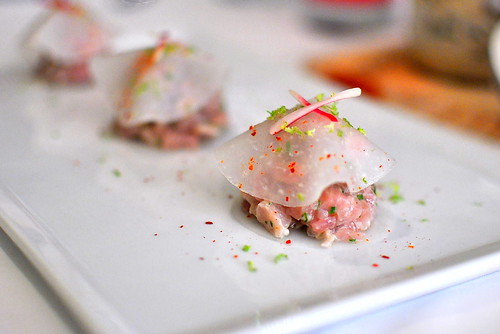 Course number two was a Hamachi Tartare ($14), which was inspired by a lobster dish that Chef Bailly mastered while working under Chef Joël Robuchon. The tiny cubes of fish were topped with shaved turnip, lime zest, and Espelette pepper. The zest really made this dish pop. 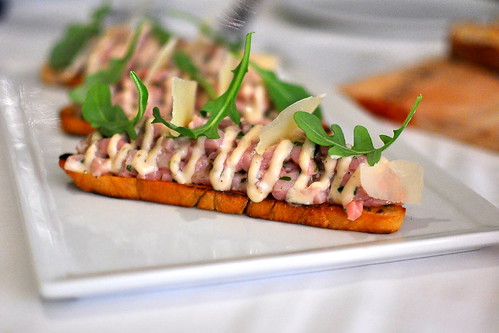 One of the strongest and most memorable dishes of the evening was the Vitello Tonnato ($14). I have a weakness for raw preparations, and this veal steak tartare with arugula and Parmesan really impressed me. The meat’s robust flavor, which Diana likened to that of hamburger, was unexpected and totally delicious. Toasted crostini provided a sturdy base and effective vehicle. 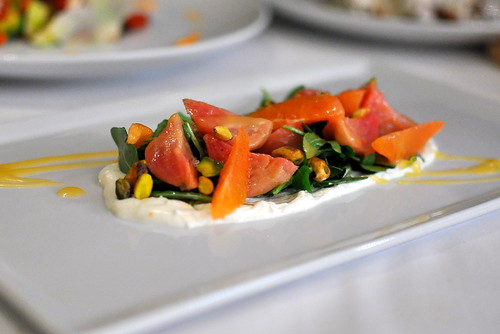 The veal tartare was followed up by a trio of salads, including one with baby beets, mizuna (water greens), ricotta, Cara Cara oranges, and pistachios ($12). The combination of flavors was well matched. 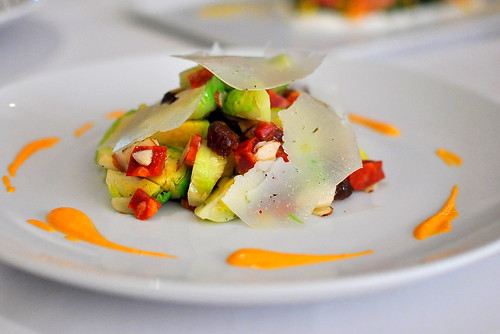 Next to arrive was a Brussels sprouts salad with Manchego cheese, chorizo, dates, almonds, and piquillo pepper vinaigrette ($12). All three of us were diggin’ the sweet, spicy, and savory profile. 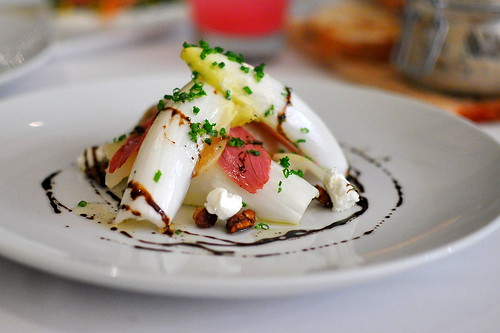 While all three salads were very tasty, our favorite was the unassuming-looking Belgian endives with duck bresaola (aged and air-dried salted meat), quince, candied pecans, goat cheese, and  truffle vinaigrette ($14). Eating three plates of farm fresh veggies was just the thing to assuage the mild guilt we felt after enthusiastically devouring a baby cow. 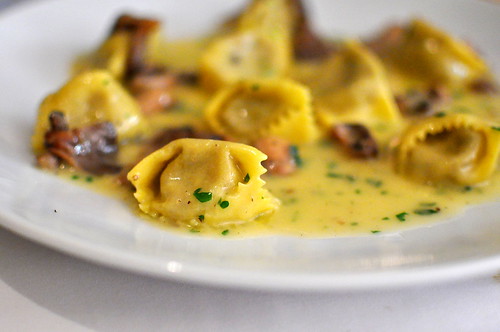 The house made agnolotti ($16) signaled the transition from starters to mains. Stuffed with wild mushrooms and bathed in truffle butter, the little parcels had a fine bite to them and an unmistakable earthiness. 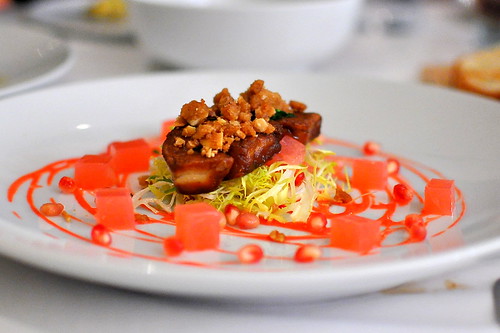 Along with the agnolotti, the Chef sent out a beautiful plate of foie gras ($18). Seared to perfection, the fatty lobe was accented with frisee, cubes of rhubarb gelee, pomegranate arils, and house made Speculoos. The accouterments tamed the foie gras’ richness and added fun elements to the plate. 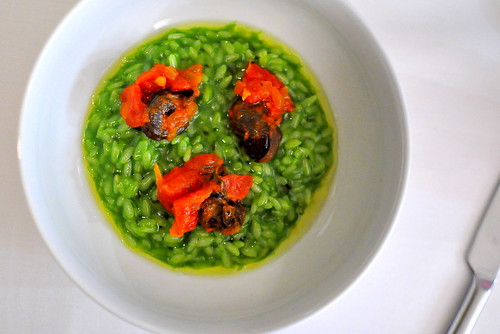 Another one of my favorite courses was the basil risotto ($14) with escargot, lemon, and tomato. Each plump snail was wrapped in a tangy tomato blanket. 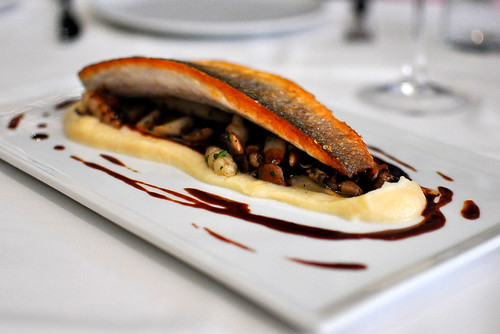 The Astronomer and Diana did most of the heavy hitting when it came to the crispy Loup de Mer with sunchokes soubise and wild mushrooms ($26). I snagged a piece of its tautly fried skin but didn’t delve much further to save space for the pasta courses. Noodles > cooked fish. 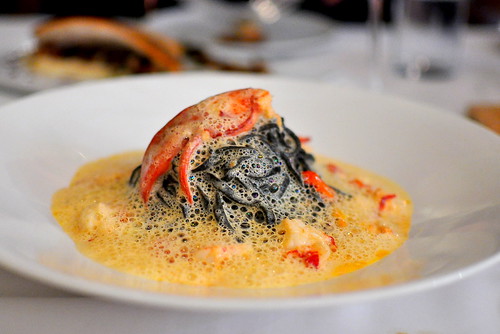 The final three savory dishes featured luxurious handmade pastas—the stuff my dreams are made of. Even though we were all seriously stuffed, our forks couldn’t stop twirling up the squid ink taglieneri ($22) with Maine lobster, cherry tomatoes, and basil. The lobster was plentiful and expertly cooked, while the noodles were tender and flavorful. It’s rare for lobster to be upstaged on a plate, but in this case, the taglieneri was the standout. 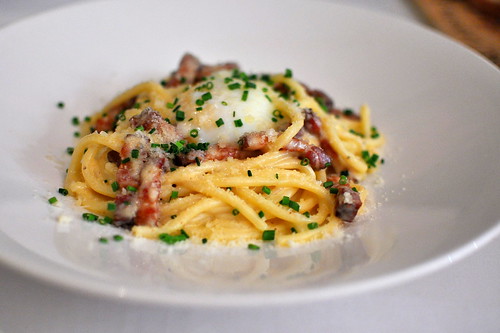 The bucatini carbonara ($18) was also phenomenal. The richest of the three pastas, this one included a runny poached egg, crisp cuts of pancetta, and a decadent sprinkling of Parmesan. Twirl, twirl, twirl… 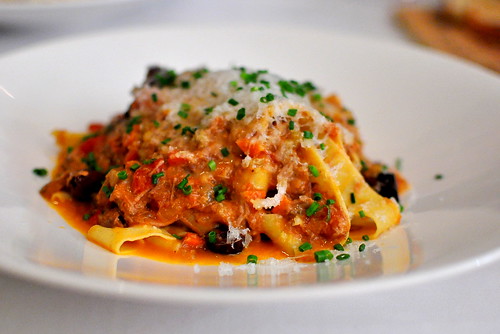 And finally, a hearty lamb pappardelle ($18) accented with tomatoes, olives, and Onetik goat cheese. I wasn’t sure about the black olives initially, but I was grateful for the briny punches toward my final forkfuls. 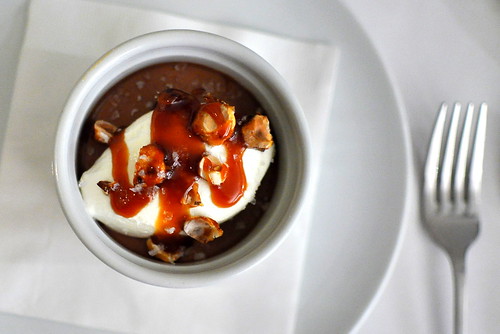 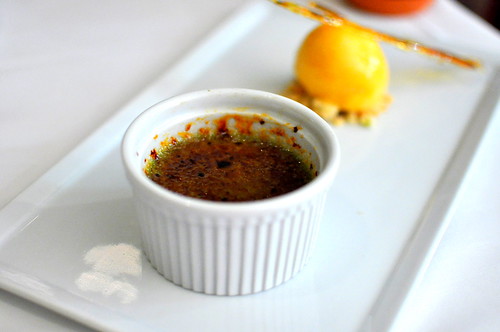 And just to be absolutely certain that our stomachs were pushed to maximum capacity, he also sent out a pistachio creme brulee ($9) with apricot sorbet and rosemary crumble. According to the Chef, pistachio, apricot, and rosemary are often paired together in Mediterranean cuisine. I found the distinct nuttiness of the pistachio more pronounced in this version than in previous ones that I sampled at Petrossian. Mmm! 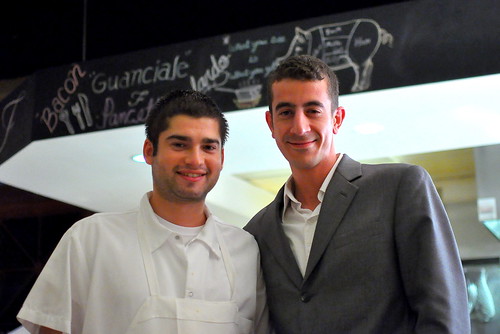 A special thank you to Ben and Paul for showing us a most spectacular time this evening. Fraîche exceeded my sky-high expectations and I cannot wait to return for the truffle burger and of course, more noodles! Long live the communal wine glass.

UPDATE: I enjoyed my dinner at Friache so much that I returned for brunch a month later. My experience on this occasion was not at all what I had anticipated. Instead of solid food and professional service, my friends and I endured painfully incompetent service and one dish that was horrifically composed.  However, it must be noted that the offending dish was replaced with a new one without hassle or charge. It turns out that when Ben is not in the kitchen, both food and service can be hit or miss. What a shame…