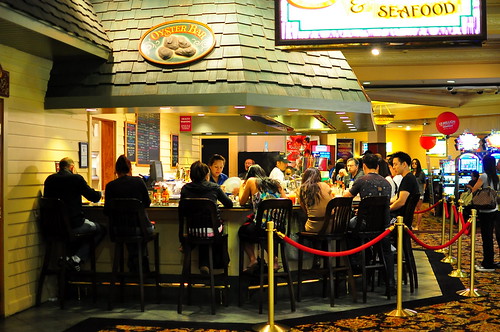 Smack dab in the middle of the Palace Station casino floor is an eighteen-seat Oyster Bar with a cult-like following. I was sent here by three pandas, two hungry ones and one that knows kung food. “Get the pan roast,” they all advised. “And make sure to go at off-peak hours,” they added. Never once have these pandas led me and my stomach astray, so I happily did as I was told.

On our second day in Vegas, The Astronomer and I headed to Palace Station for lunch. In the excitement and anticipation of it all, I forgot to heed my friends’ second piece of advice. As a result, we stood in a lengthy line that ultimately took nearly two hours to get through. Eeek! 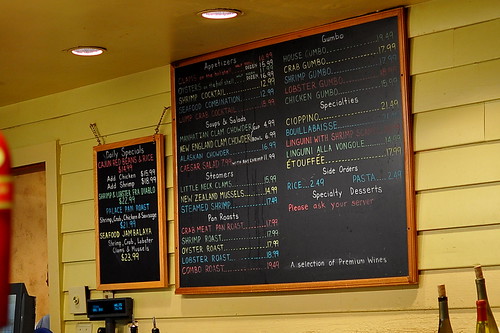 The unassuming counter serves a diverse selection of seafood offerings, including a handful with a New Orleans bent. While waiting in line, I met a fellow Angeleno who originally hailed from the South. She’s been coming to Oyster Bar for years now and always orders the gumbo with either rice or pasta. Even though I had decided my fate from the get-go, I briefly considered switching it up. People passionate about their food can be so convincing! 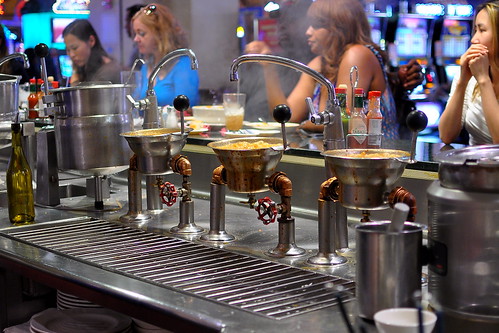 When it finally came time to grab two stools at the bar, I let out an enthusiastic squeal—the moment had finally arrived for me to experience the mysterious pan roast.

Every seat along the counter offered a great view of the open kitchen. The steam-powered pots with tilt-able handles were constantly bubbling away, filling the air with steamy goodness. 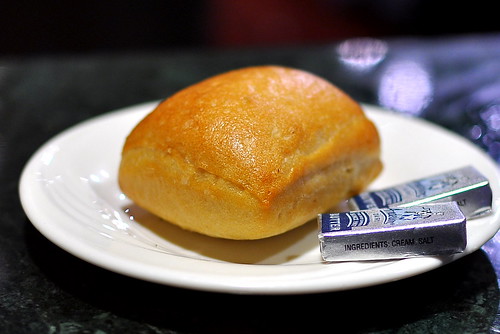 To start, complimentary sourdough rolls with butter. After slathering the warm roll with a schmear of butter, we both scarfed it down real quick. 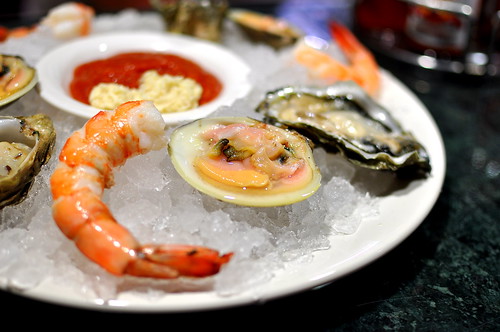 We didn’t initially plan on ordering anything but the pan roast, but after waiting in such a long line, a starter was definitely in order. The seafood combination consisted of three shrimps, three oysters, and three clams served on crushed ice with cocktail sauce, horseradish, and lemon wedges ($12.99).

While the guy behind the counter was shucking and assembling our appetizer, he remarked that the Canadian oysters and clams that he was serving up were of terrible quality. Both The Astronomer and I appreciated his honestly, but instantly regretted our order. Sure enough, the clams and oysters were of terrible quality. Both were strangely meaty in texture and offputtingly fishy. An inauspicious start to our Oyster Bar meal. 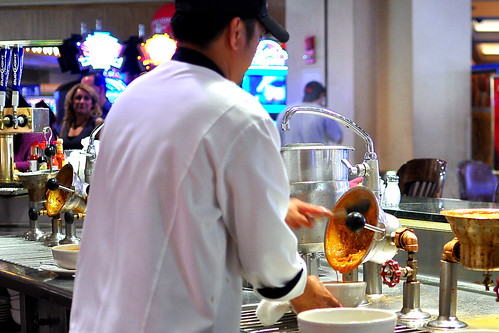 Halfway through our appetizer, the main course arrived. The expert pan roaster made sure to scrape every last bit into the bowl. 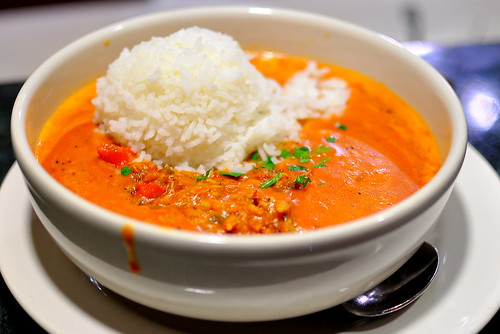 The pan roast, which is essentially a lobster bisque type of seafood chowder, arrived topped with a scoop of white rice. We chose the combination pan roast with lobster, shrimp and crab ($19.49). Thick, rich, and served piping hot, the pan roast was the very definition of southern comfort. The simple rice paired well with tangy and spicy seafood gravy. It’s hard to believe that such a homey and soulful dish was whipped up on a slightly sleazy and seriously smoky casino floor. Vegas never ceases to surprise me.

While I wouldn’t endure another two-hour line for this bowl of orange-tinged chowder, it is a more than suitable off-peak treat.