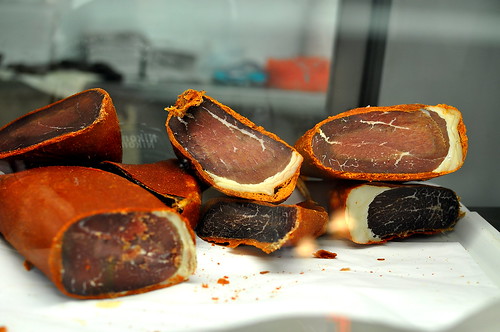 It’s a well known fact that cured meats make my heart go pitter-patter, so when a fellow Pasadena-based food blogger alerted me that a basturma specialist recently opened up shop down the street from my home, I made my way there at my earliest convenience. 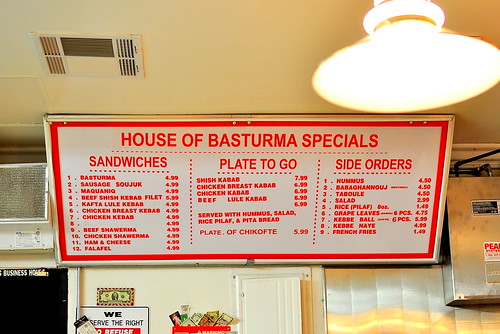 House of Basturma was completely empty when The Astronomer, Danny, and I arrived last Tuesday night. However, as soon as we walked in, the mom and pop who run the place unglued their eyes from the local news and assisted us in navigating the Armenian-Lebanese-Turkish menu. I kind of got the sense that the older couple was a little baffled as to why two Asian kids and a white dude were stopping in for dinner, but they were hospitable and friendly nevertheless. 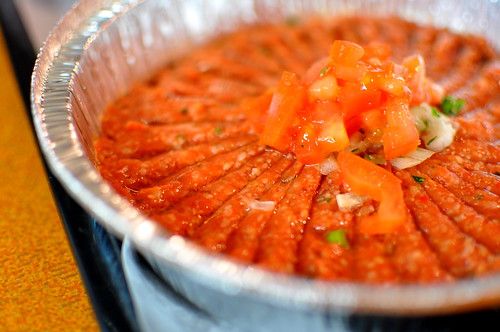 We ordered a chikofte platter ($5.99) to start. Traditionally served as an appetizer, chikofte is a mixture of bulgur wheat and finely ground raw beef. We were informed by the proprietress that only Middle Eastern palates appreciate this dish, but we went ahead and ordered it anyway because I heart raw meat as much as the cured stuff.

The chikofte was topped with lightly dressed fresh tomatoes and served with warm pita bread. The first few bites of the chikofte along with the pita and veggies were very lovely, but  after bite number five, it started tasting monotonous. Had the portion not been so generous, we would’ve left things off on a high note! 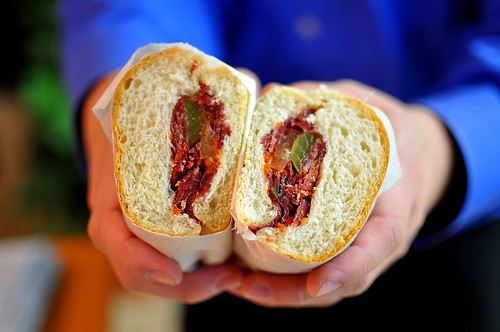 The dish I was most excited to dig into was the basturma sandwich ($4.99). In between the slightly crusty slices of bread were dill pickles, tomatoes, and the house special air-dried cured beef.

Aggressively spiced with cumin, fenugreek, garlic, and hot paprika, the basturma packed a mean and salty punch. The pickles, tomatoes, and hefty bread were effective in mellowing out the meat’s potency. Since this was my first introduction to basturma, I can’t say whether or not it was an exemplary specimen. However, I can say with confidence that it was a pleasant experience, and that I’d be up for trying more basturma in the future. 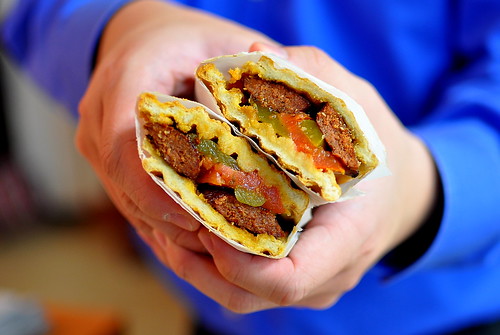 Everyone’s favorite sandwich was the soujuk sausage ($4.99). The short and stout links were sliced in half and seared on the stove before joining the pickles and tomatoes between two slices of bread. The sandwich was quickly grilled using a panini press to finish.

We were expecting a bit of heat because the man behind the counter warned us that the sausage would be “spicy,” but what he meant to say was that the soujuk was bursting with spices—cumin, sumac, garlic, salt, and red pepper. Misunderstandings aside, the sausage sandwich was very tasty. 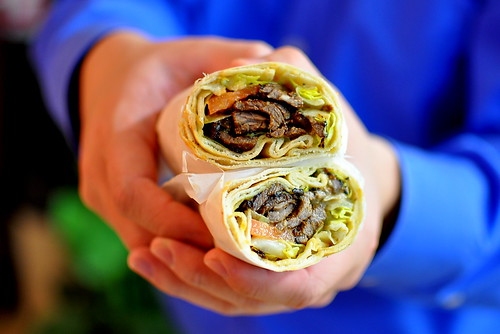 Lastly, we shared the beef shawarma ($4.99). Wrapped in flat bread and smothered with tahini, the shawarma tasted nice and meaty, but relatively tame compared to the basturma and soujuk that proceeded it.

Following our savory feast, we retreated next door to Carmela Ice Cream for dessert. Maybe dining in Pasadena ain’t so boring after all…

17 thoughts on “House of Basturma – Pasadena”