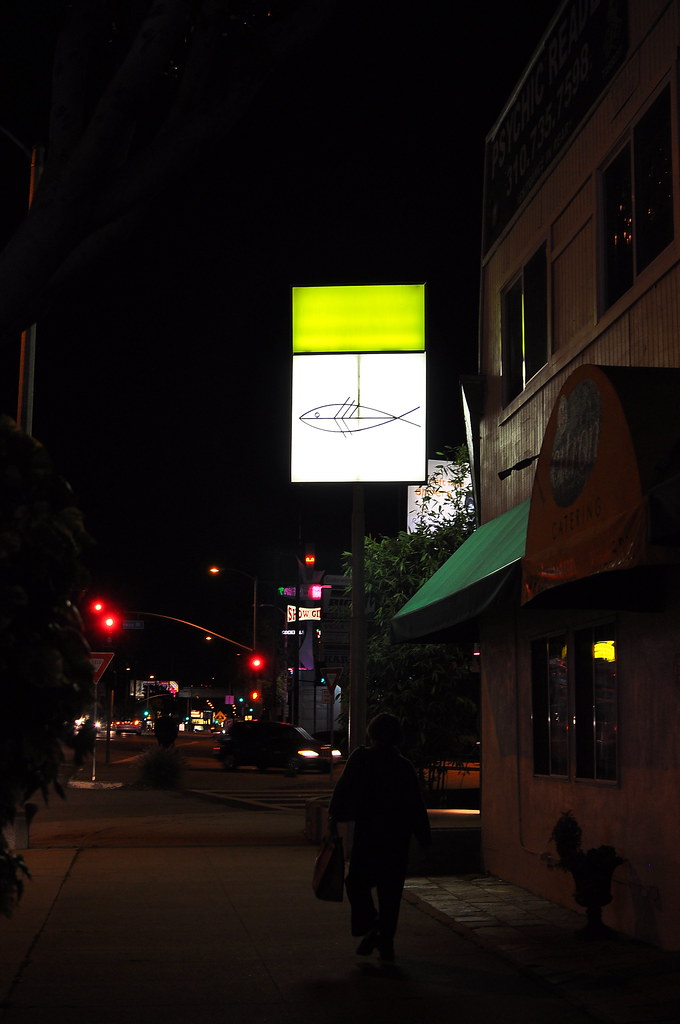 I will remember my 29th birthday as the one where I finally sat down for an omakase sushi dinner. Meals of raw fishes aren’t foreign territory for me, but entrusting my entire supper to one of the city’s best sushi chefs was a significant change and splurge.

Seeing as though Los Angeles is a sushi-appreciating town, I had a bevy of choices as to where to do the deed. After carefully considering my options, Mori Sushi stood out among the crowd. If I was going to spend a pretty penny on sushi, it had to be with a man who cares so immensely about his craft that he sculpts his own tableware and oversees the production of his rice to exacting standards. I wanted a serious sushi experience, and I knew Chef Morihiro Onodera (Katsu, R23, Matsuhisa, Hatsuhana, and Takao) would deliver. 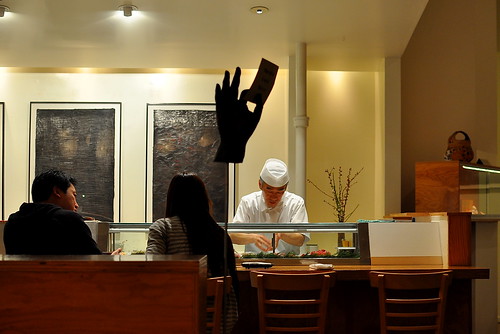 The Astronomer and I had the opportunity to dine at the counter, but chose a table for privacy’s sake. Mostly, I didn’t want to weird the chef out with my happy-snapping ways. Next time, when I’m not documenting my meal plate by plate, I’m totally sitting at the bar.

The small dining room, which was decorated minimally and without fuss, was nearly packed on this Wednesday night. 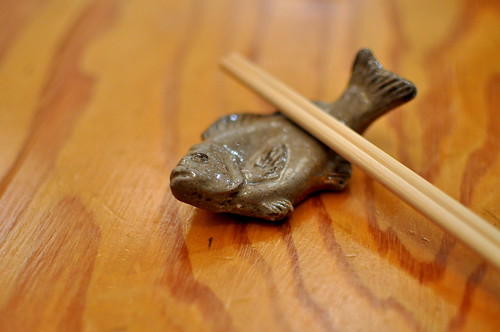 The chopstick rests set the perfect tone for the evening. I wonder if Mori sculpted these as well. 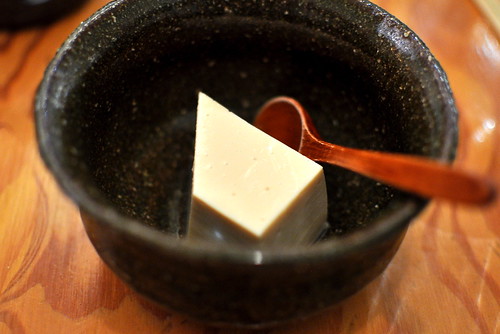 The Astronomer and I chose a mid-range omakase that included three small appetizers and a selection of sushi. Additionally, we ordered a few pieces a la carte to round out our meal. The cost of the entire dinner was slightly over $100 per person before tax and tip.

The first course to arrive was a cool block of homemade tofu served with little dishes of wasabi and soy sauce sauce. According to our waitress, the soy sauce is a special blend that Mori makes from scratch. The texture of the tofu was absolutely silky, while the flavor was purely soy. The blank canvas livened up nicely with the addition of the two condiments. 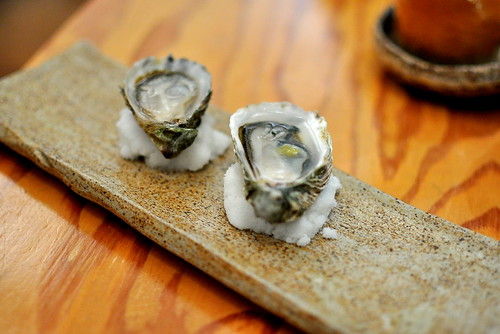 The second appetizer was a duo of Kumamoto oysters—one was served straight up, while the other was topped with fresh yuzu juice. Both were fresh, bright, and delightful. 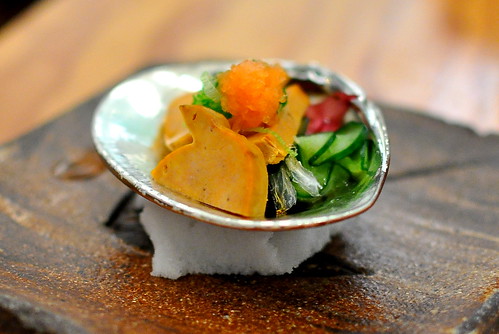 The final appetizer was monkfish liver served in a half shell along with seaweed, agar, radish, pickles, and scallions. The vegetal components were lightly dressed in a soy ponzu. The delicate slices of liver tasted ever so slightly of the sea. 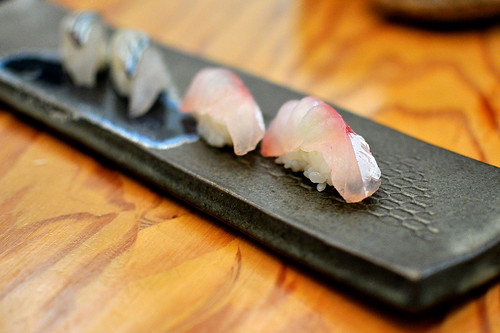 The sushi portion of the evening began with snapper marinated in kelp. The rice, which was loosely packed and a touch cooler than room tempeture, was of the koshihikari variety. It is grown especially for Mori in Northern California by Ichiro Tamaki. 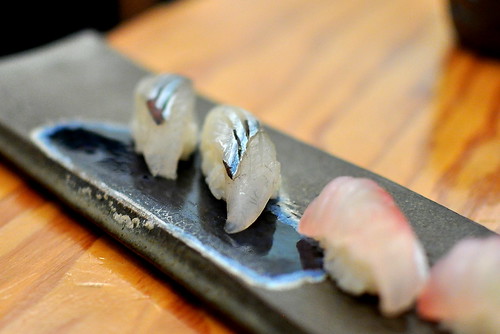 Served in tandem with the snapper was needlefish, which tasted less assertive than its metallic skin suggested.  I couldn’t help but notice that the coloring on the fish perfectly matched with the glaze on the plate. 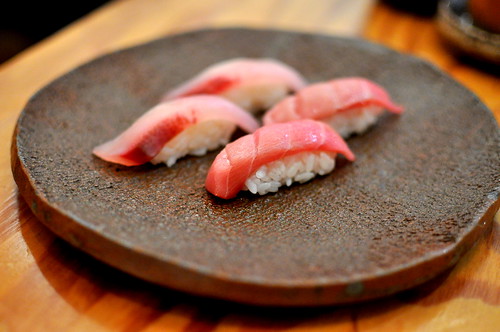 Bluefin toro made three appearances this evening. The first preparation was simply flanked atop a mound of rice. It was a luxurious mouthful. 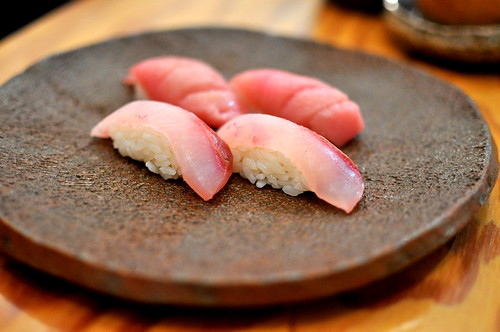 Served alongside the toro were pristine slices of yellowtail. 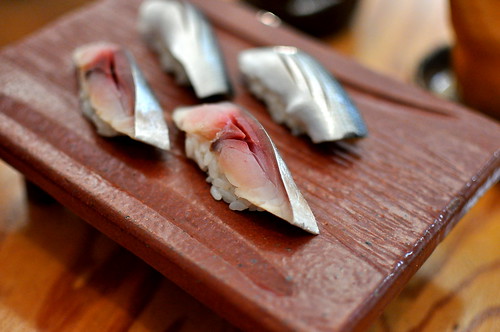 Next came pieces of Japanese mackerel. After a series of milder tasting nigiri, The Astronomer and I loved its distinctly fishy flavor. 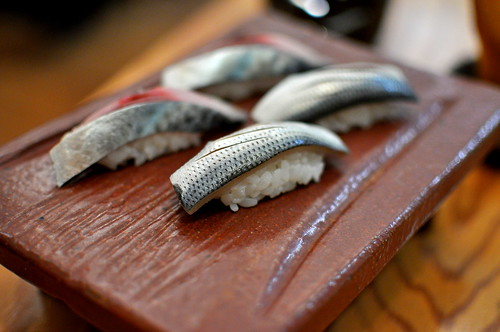 The mameyash, baby Japanese jack mackerel, matched the mackerel in fishiness and meatiness. I love fish with character.

Taking a break from traditional fishes, Mori sent out pieces of cuttlefish and Boston sweet shrimp. The cuttlefish was surprisingly dense and sticky with a hefty body, while the shrimp was shockingly creamy. The textural contrast between the two was fantastic. 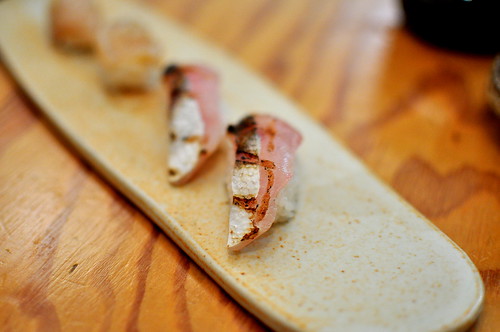 One of the most memorable bites of the evening was the charred Barracuda. The Astronomer remarked that Mori “uses the char to such great effect!” The slight bitterness of the char enhanced the fish’s supple sweetness. 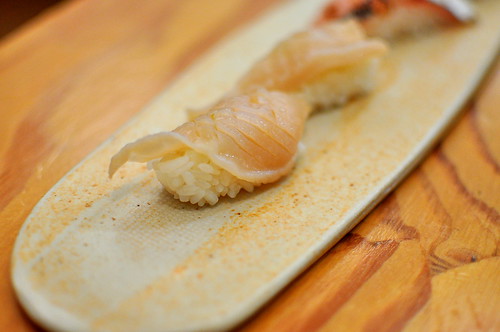 The scored slices of jumbo clam surprised us with a splash of yuzu juice and tingly spiciness. 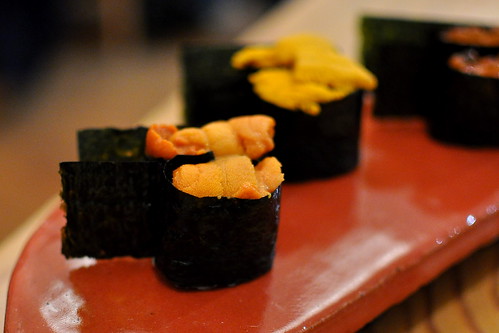 Next, a duo of sea urchin and salmon roe. The Hokkaido sea urchin gushed unexpectedly, flooding my mouth with an oceanic essence. The package was neatly wrapped in nori (seaweed) from the Inland Sea of Japan. 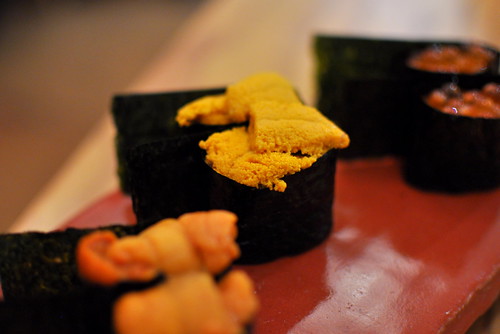 I preferred the the Santa Barbara sea urchin, which was sweeter and didn’t burst with such intensity. 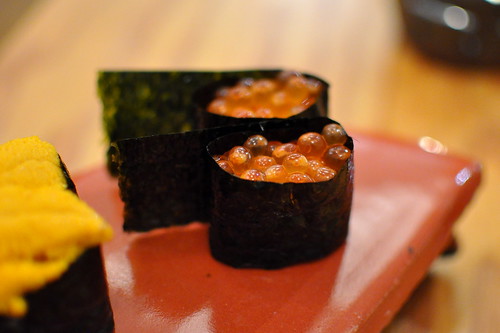 The salmon eggs marinated in dashi were a savory powerhouse. 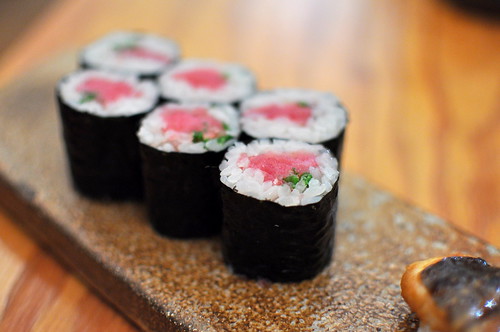 Toro made its second appearance in the form of a toro and scallion roll. The neat and tidy roll delivered on all fronts. 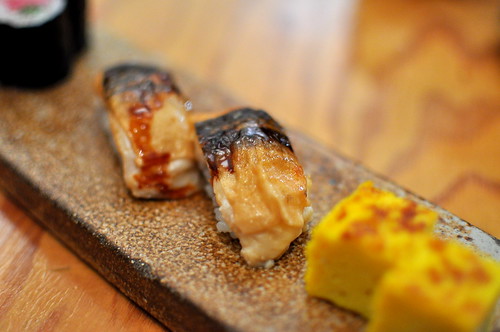 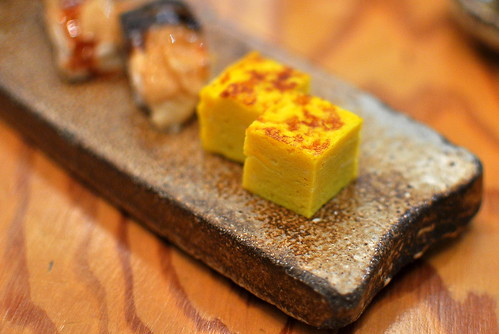 …and sweet tomago that had a distinct baked good-like quality. The roll, eel, and egg were the final pieces of the omakase. Our stomachs were  satisfied at this point in the meal, but we desired just a little more. 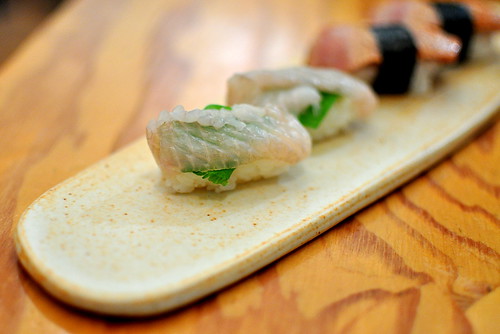 Our waitress suggested that we order the halibut fin with shiso, which had a satisfying bite and herbaceous finish. 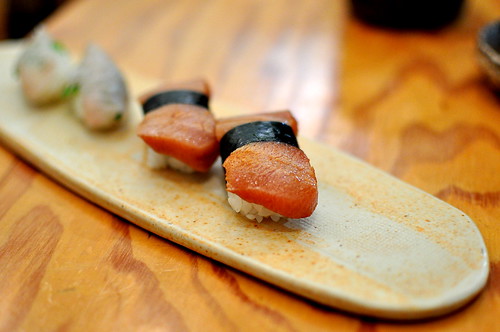 She also highly recommended the grilled toro, which was painted with Mori’s special soy sauce and tasted like filet mignon. The Astronomer and I couldn’t get over how spectacular the flavor and textures were. Hands down, the most incredible piece of the night. 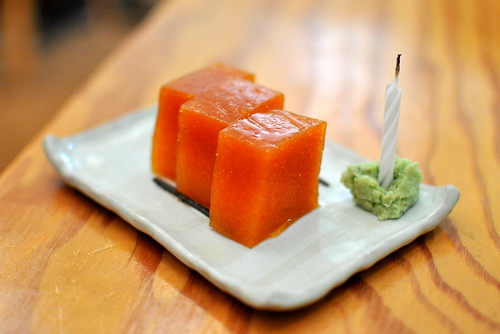 For dessert, the kitchen sent out hot green tea and persimmon jellies on the house… 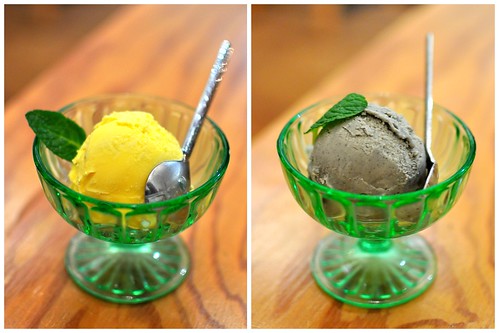 …as well as scoops of ginger and black sesame ice cream.

It was a happy birthday indeed.