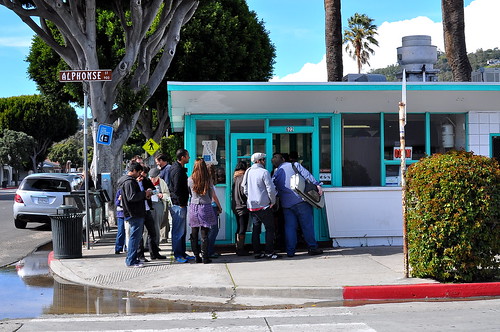 The Astronomer and I haven’t been spending very much time at home these past couple of weeks. Following our jaunt to The Bay Area, we jetted to the Central Coast to spend the weekend with our friend Lang—a professional cyclist from Seattle who is training in the area during the off season. Even though I was a bit exhausted from our earlier travels, I was super stoked to see my old friend and to visit a new part of my beloved state.

Before arriving in Buellton, The Astronomer and I made a quick stop in the beautiful coastal town of Santa Barbara for lunch. Los Angeles residents really have no business traveling to Santa Barbara for Mexican food, but we couldn’t help but line up for a taste of the famous La Super Rica Taqueria. Hype is a powerful force, one stronger than rationality and logic combined. 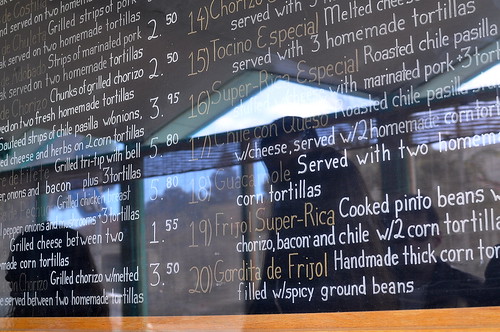 This unassuming taco shop on the corner of Alphonse and Milpas is best known as Julia Child’s favorite Mexican restaurant. The family-owned restaurant has built a loyal following throughout the years, as evidenced by the heaps of positive press it has garnered and the lines snaking out its doors. 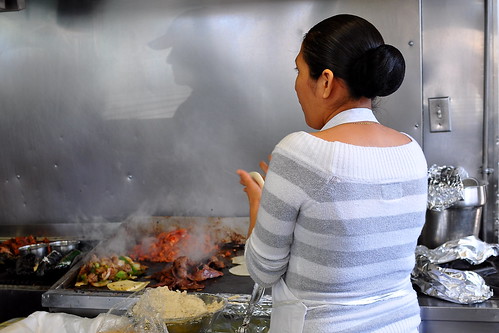 Nearly everything is prepared to order, which meant a twenty minute lull between placing and receiving our order. The smells emanating from the grill teased us as we waited. 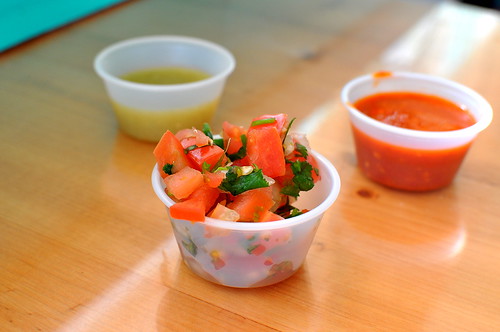 There are three types of house-made salsas available—a standard pico de gallo, salsa verde, and a basic red salsa. All three were fairly tame in terms of tang and heat. 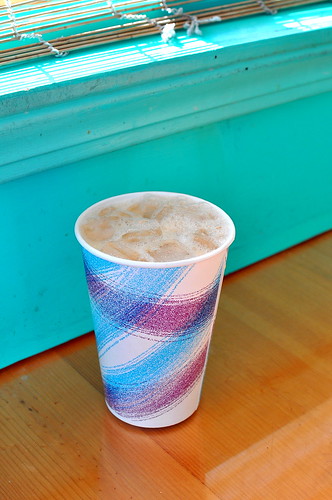 A Mexican meal isn’t complete without an agua fresca to wash everything down. Seeing as though my darling Astronomer is a cinnamon fiend, we chose the horchata over the jamaica. 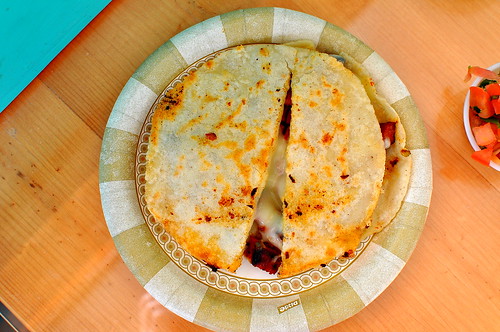 The Astronomer and I shared three dishes this afternoon. The one I enjoyed the most was the quesadilla con chorizo ($3.50), which was made with two delightfully crisp handmade corn tortillas, melted Monterey Jack cheese, and well-spiced sausages. It was an unfussy and wholly satisfying affair. 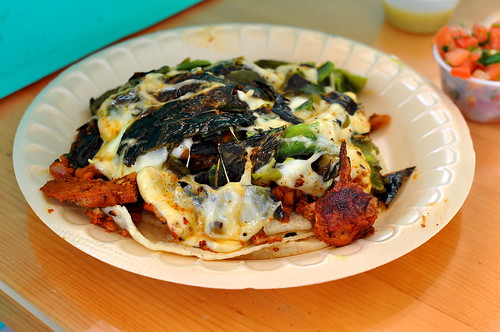 The second plate we shared was the Super-Rica Especial ($6.80), also known as #16. The restaurant’s signature dish consisted of grilled pasilla chile layered with pieces of marinated pork and cheese, atop two handmade corn tortillas. It was not much to look at and slightly unwieldy to eat, but the smoky flavors were unique and appealing. 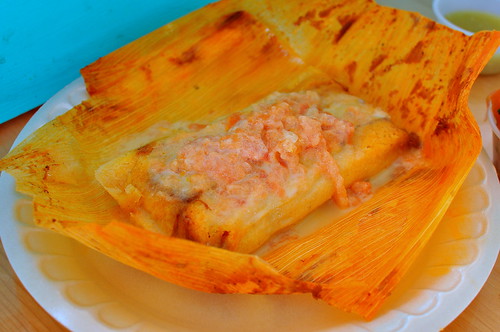 The final dish was the tamal norteno de puerco ($4). What made this shredded pork, vegetable, and herb-stuffed tamal special was the creamy fresh tomato sauce that topped it. The Astronomer liked this one best.

All three dishes sampled this afternoon were quite tasty, but not leaps and bounds better than Mexican food I’ve eaten in the past. While I wouldn’t hesitate to dine here again were I to find myself in Santa Barbara, I wouldn’t go out of my way for a second helping of La Super Rica.