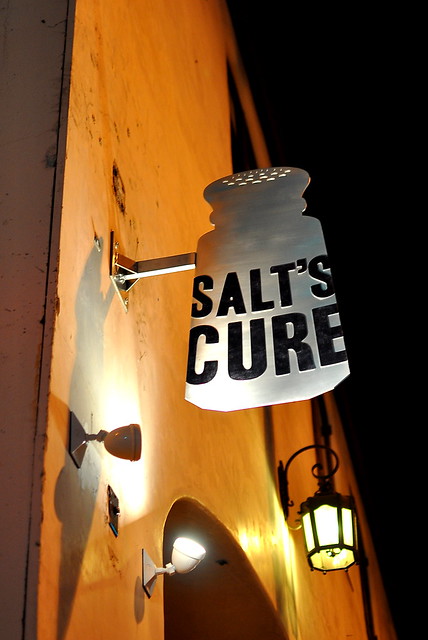 There’s a lot to love about Salt’s Cure. For starters, the kitchen makes everything from scratch. From the ketchup to the bagels, every little thing is sourced from within. Additionally, all of the produce, meat, cheese, wine, and beer comes solely from California. Salt’s Cure is committed to keeping food miles in check and highlighting the very best of the Golden State.  To top it all off, the ambiance is laid back and the chefs crank out some really terrific food. 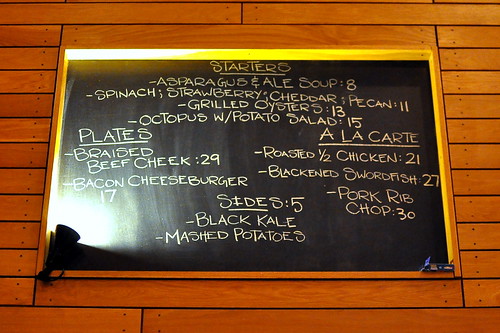 Owned and operated by chefs Christopher Phelps, Zachary Walters, and Naomi Shim, the restaurant offers a small menu that changes daily. In addition to the blackboard offerings, there’s always a diverse selection of smoked, cured, and pickled meat, fish, and vegetables to be had. 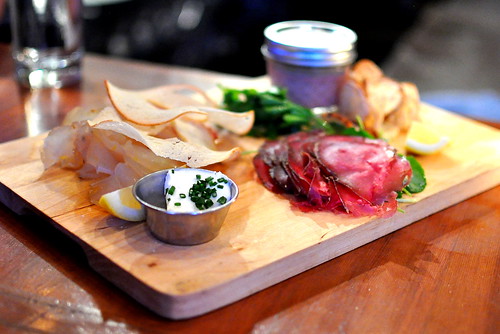 I’ve been wanting to dine at Salt’s Cure ever since I heard about its impressive charcuterie, but didn’t get a chance to do so until a few weeks ago. My friend Lien and I grabbed two seats at the bar facing the open kitchen for maximum chef swoonage. She’s a regular at the place, and we were treated like queens this evening.

To start, we dug into a tremendous plank of cured, smoked, and potted goodness. There was a silky pile of smoked halibut ($14) that Lien and I paired with bagel crisps and chive-flecked sour cream. The tender slices of beef round ($10) were eaten straight up or wrapped with a few sprigs of lightly dressed watercress. 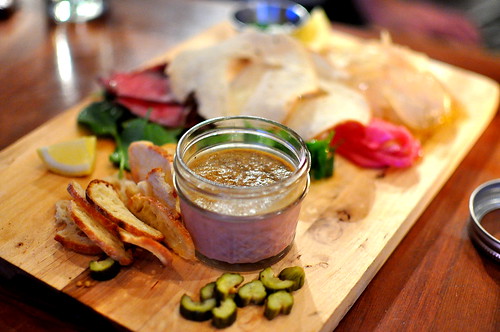 The highlight of the plank was the jar of rich chicken liver pudding ($11). It was especially fantastic slathered on toast points and topped off with a ring of pickled red onion. 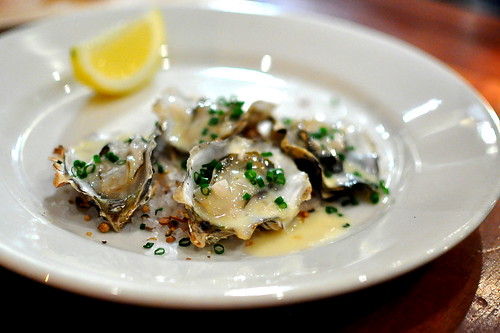 A plate of oysters on a half shell ($13) arrived following the charcuterie. Drizzled with a lemon butter sauce and sprinkled with chives, the delicate little things slithered smoothly down our gullets. 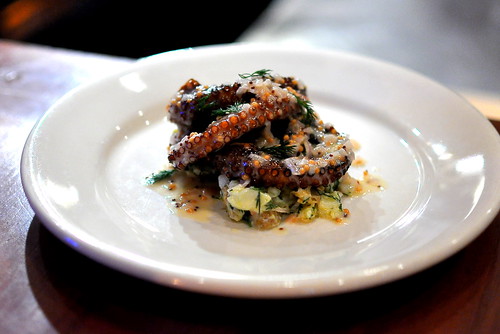 The grilled octopus ($15) served next was spottily charred with a nice meaty texture. It was served atop a shallot and dill potato salad. 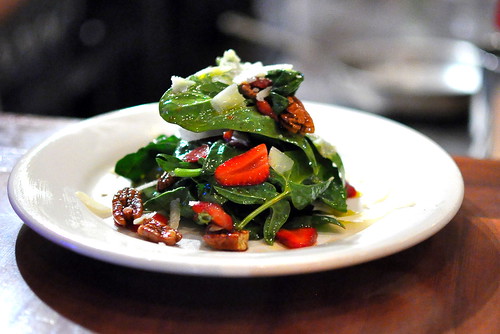 I would’ve been quite content eating plates upon plates of meat, but the chef thought we could use a heap of greens to balance things out. The baby spinach salad was dressed in a simple red wine vinaigrette with cheddar, candied pecans, and the season’s first strawberries ($11). 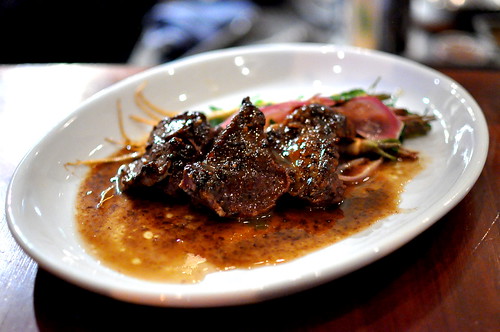 Moving on to our main course, we shared a platter of braised beef cheeks ($29). Chef Phelps explained to us that beef cheeks are a very special cut because they’re simultaneously fatty and muscular. Cooked slow and low for the better part of the day, the cheeks were caramelized and fork-tender. 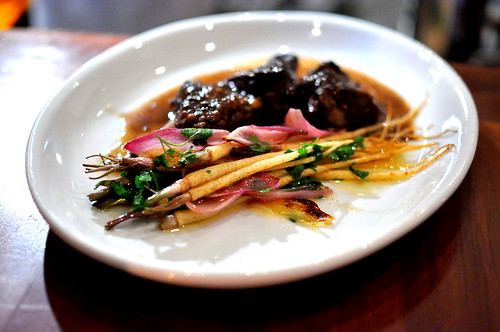 Served alongside the cheeks were sauteed baby parsley roots that were long, skinny, and snappy. They demanded to be eaten with our fingers. 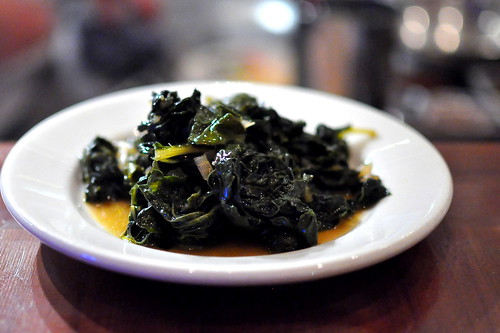 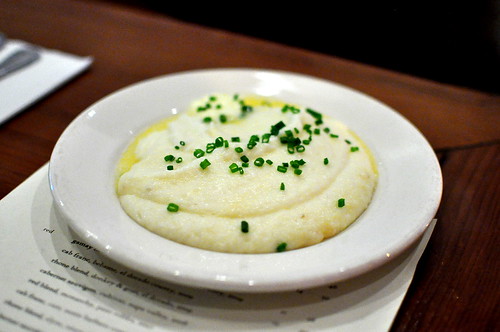 …as well as a not-so-virtuous, but absolutely luxurious, bowl full of butter-topped mashed potatoes ($5). 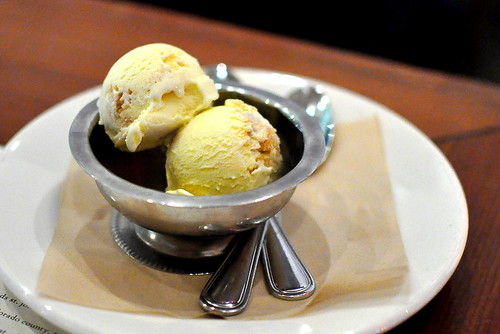 For dessert, we shared a few scoops of lavender shortbread ice cream. The cookie bits were surprisingly crunchy, which contrasted superbly with the smooth and sweet ice cream.

After bidding my friend Lien goodbye and thanking the chef for his hospitality, I departed Salt’s Cure with a small doggy bag for The Astronomer and thoughts of returning soon for brunch. 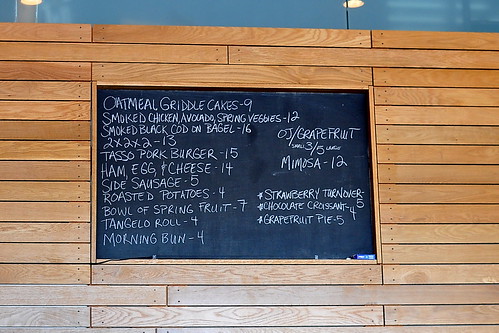 I came back not too long after with The Astronomer and our brunching buddies Esme and Craig. We sat at the bar once more since a table for four wasn’t immediately available. The bar’s corner seated four comfortably and the view could not be beat. 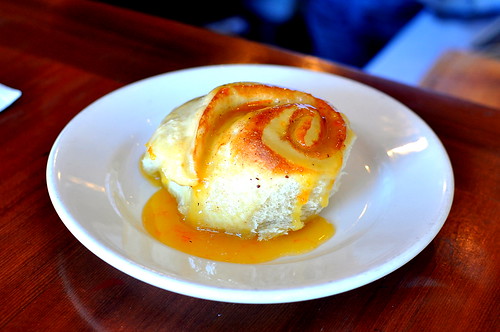 Before our savories arrived, The Astronomer and I shared a fresh-from-the-oven tangelo roll ($4). The texture was a little on the doughy side, but the glaze was well-balanced and zesty. 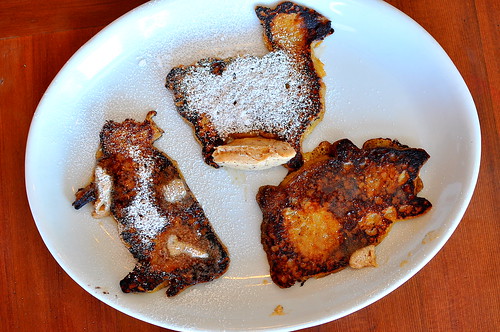 Chef Phelps also sent out a plate of special-edition farm animal oatmeal griddle cakes on the house. Served with cinnamon butter, the sheep, cow, and pig were light, fluffy, and adorable. I especially enjoyed eating the udders off each animal. It’s the most delightful part, don’t you know… 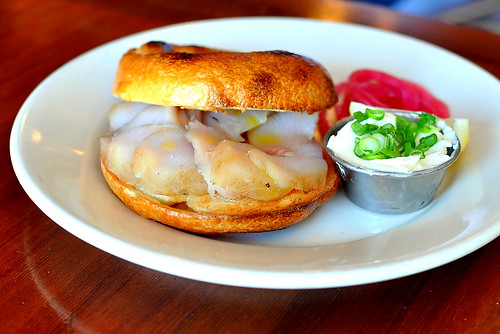 For my main course, I chose the smoked black cod on a bagel ($16). It was served with house-made cream cheese and pickled red onions. Smoked fish on a bagel with cream cheese is one of my all-time favorite foods, and this version did not disappoint. I loved how the slices of fish were lightly smoked and thickly sliced. 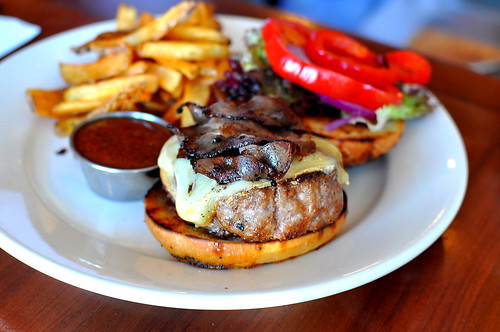 The Astronomer ordered the pork burger ($15), which came topped with Tasso ham, mixed greens, and pickled red bell peppers. On the side were fries and ketchup. His first bite unleashed the most incredible flood of porky juices. The waterfall spilled over onto the plate, table, and eventually his poor pants. It was a messy introduction, but so very worth it. The Astronomer has vowed to eat future Salt’s Cure burgers with a knife and fork in order to distribute the juices more evenly. 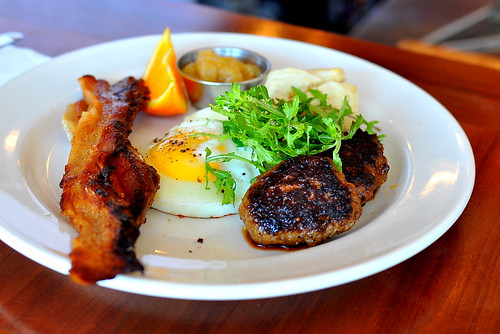 Both Esme and Craig ordered the 2x2x2 ($13)—two sausage patties, two sunny eggs, and two slices of bacon. On the side was an applesauce compote and a little biscuit. Our friends were noticeably quiet as they dug into their plates of food. Save for a few oohs, ahs, and “this tastes ridiculous,” the 2x2x2 captured their full attention. I must return for brunch again in order to taste the sausage. Esme had promised to share a little bite, but changed her mind once she tasted it. I don’t blame her. 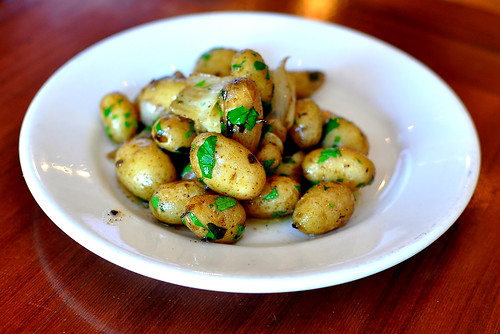 Craig and Esme shared a plate of roasted potatoes ($4) to supplement their 2x2x2. The baby spuds were almost as adorable as the farm animal griddle cakes from earlier.

So, like I said, there’s a lot to love about Salt’s Cure.