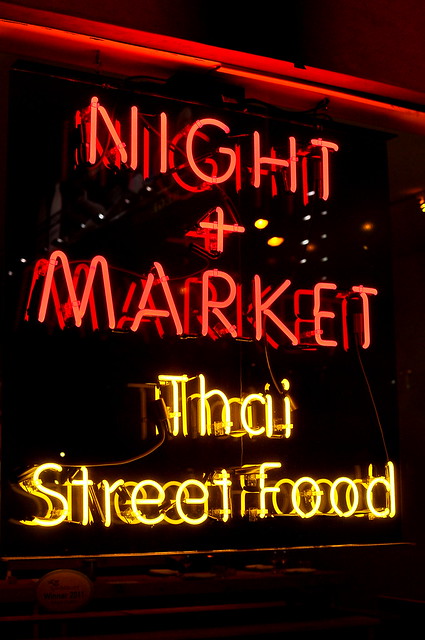 Chef Kris Yenbamroong opened Night + Market after spending years behind the stove at his parents’ decade-old Thai restaurant Talésai. Serving the same menu day in and day out, he grew a little antsy and desired an outlet to showcase a different side of Thai cuisine. When the space next door to Talésai became vacant, Chef Yenbamroong quickly snatched it up and transformed it into a dining room where the gritty street foods of Thailand’s night markets reigned supreme. 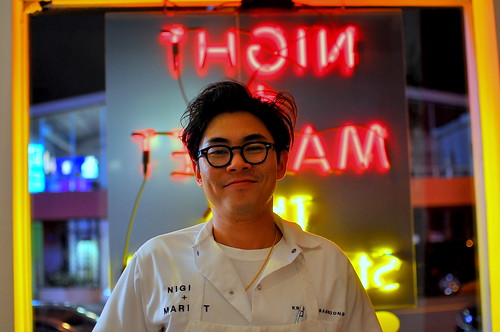 Now that he doesn’t have to worry about alienating Talésai’s longtime patrons, Chef Yenbamroong is finally able to serve food that personally inspires him in a space fitting of his style. Although, being the good son that he is, he still runs the kitchen at Talésai as well. 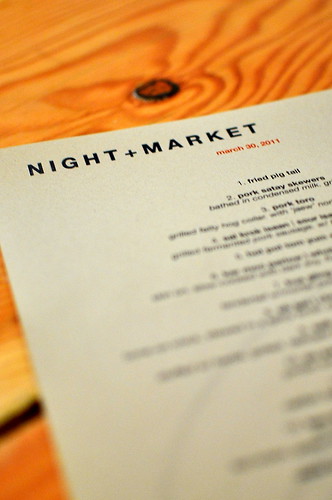 My friends Will and Brian, who have been dining here since it opened last November, recently coordinated a small dinner to introduce a couple of newbies to Chef Yenbamroong’s exciting concept. In order for us to fully experience Night + Market, the chef curated a tasting of his favorite dishes for us this evening. Everything was served family style, which properly captured the communal spirit of the place. 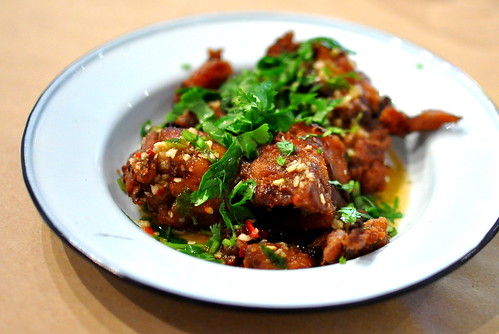 The first dishes to hit the table were a slew of meaty bites from the appetizer portion of the regular menu. The fried pig tails, which were beautifully caramelized and incredibly tender, came dressed in a tangy, chili-laced vinaigrette. There wasn’t much meat on the bone, just a mouthful of deliciously fatty bits. 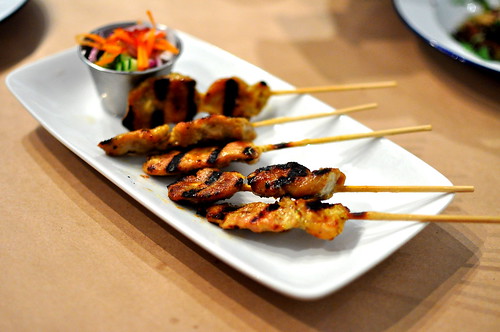 Meat on a stick is the quintessential Thai street food in my experience, so I was very happy to see them make an appearance. Bathed in condensed milk  and grilled over open flames, the pork satay skewers were smoky and sweet. 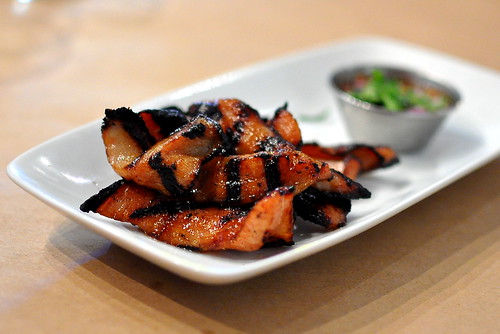 Another fabulous grilled meaty bite was the pork toro—fatty hog collar. It was served with jaew, a potent Northeastern chili dip, to balance out the richness. 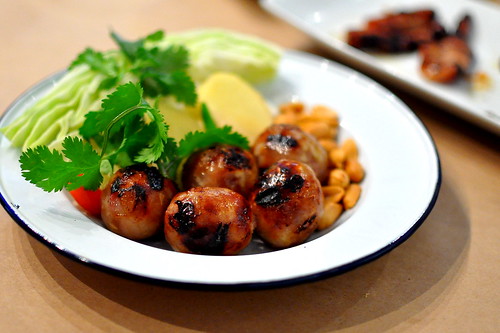 The onslaught of porky goodness continued with a platter of house made sai krok isaan, sour Isaan sausage. The fermented pork, which was a little tangy and slightly charred, was served with tongue-searingly hot bird eye chilies, roasted peanuts, and fresh cabbage. The snappy casing totally rocked. 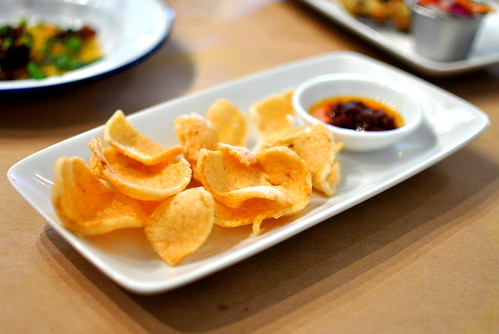 The final starter was a dish of shrimp chips served with a thick and mildly spiced chili paste. The chips were smaller and sturdier than the Vietnamese ones that I’m accustomed to. The flavor, on the other hand, didn’t veer too far from the familiar path. 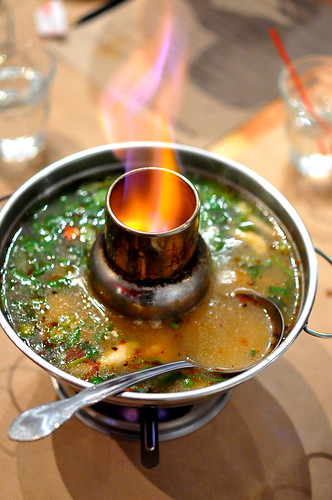 A shrimp tom yum soup arrived in a blazing hot pot following the array of appetizers. While I found the shrimp unappealingly overcooked, the broth was very well balanced and aromatic. The spicing was aggressive enough to keep things interesting. 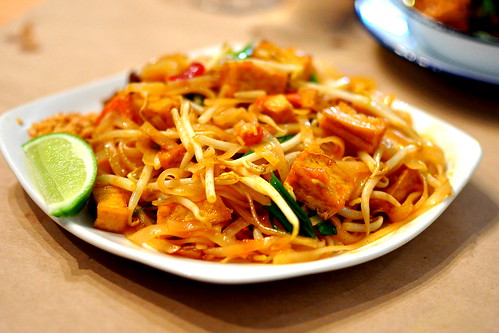 A Thai street food feast isn’t complete without pad Thai nai talad. Chef Yenbamroong’s “noodles from the market,” which included bits of sweet radish, fried tofu, dried shrimp, and crushed peanuts, were sweeter and less funky than those made by Bangkok hawkers. Raised on So Cal Thai food, I didn’t mind the sweetness of the noodles one bit. 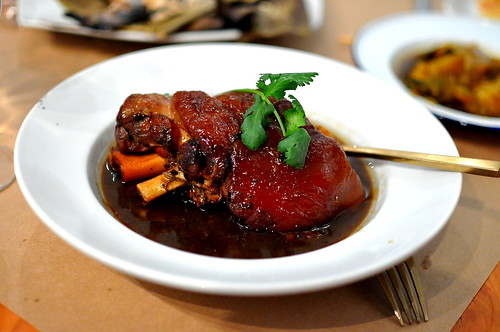 The most decadent dish of the night was the kar moo parlow, five-spice pork hock. Braised for days on end, the massive hock was so ridiculously tender that the meat and skin practically melted in my mouth. I was joking with the chef after the meal that his hock had a fetus-like quality about it—supple meat with no resistance. To balance out the hock, there were pickled mustard greens and pounded chilies with vinegar. 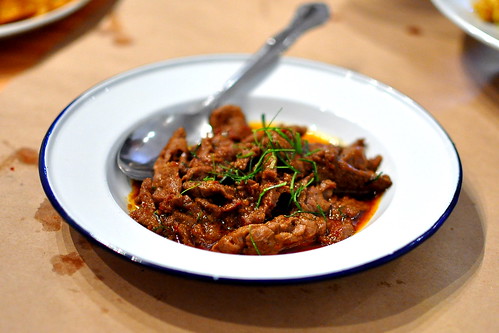 Another fantastic dish was the kua gling. Made of thin strips of beef simmered in a Southern chili paste, the “border beef” was savory and nuanced. Eaten with sticky or Jasmine rice, a little bit went a long way. 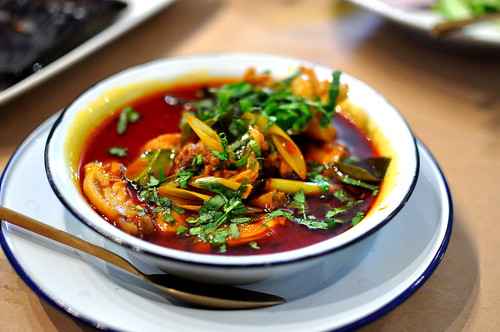 On par with the kua gling was the ob gai, a Chiengrai chicken stew. Pieces of bone-in chicken were bathed in a spicy broth of lemongrass, kaffir lime leaves, and red chili paste. 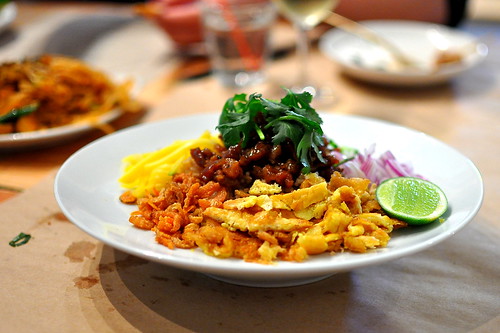 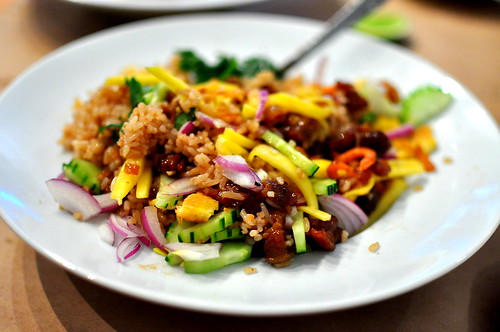 The crunch of the dried shrimps, coupled with the sour slices of mangoes, totally made this dish for me. 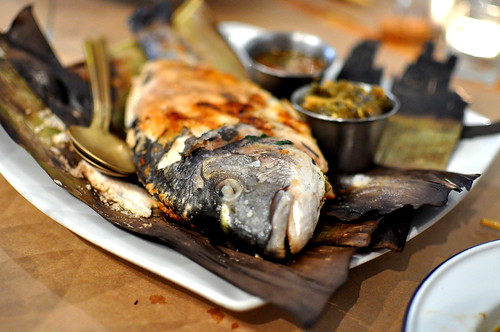 Enamored with the pigs, cows, chickens, and carbohydrates gracing our table, I barely paid any attention to the seafood courses. The grilled salt-crusted sea bream stuffed with herbs was a hit according to my dining mates. 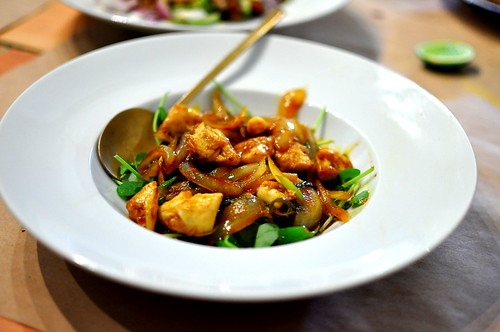 The pu pad pong karee, curried jumbo lump crab, was solid as well, but its flavors didn’t command my attention as much as the other dishes. 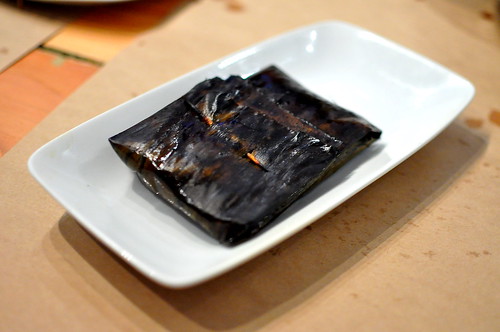 My least favorite course of the night was the hor ab. The “catfish tamale,” which was baked in a banana leaf with chili and herbs, had a mushy texture that I couldn’t warm up to. 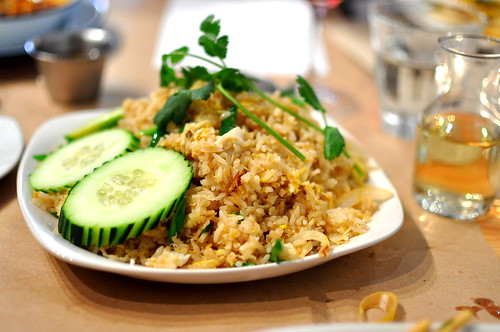 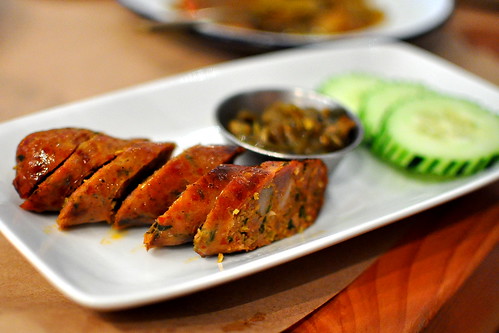 An order of sai uah, Northern Thai sausage, was also requested. The grilled pork butt sausage was served with a noom salsa and cucumbers. Unfortunately, my stomach had pretty much checked out by the time the supplemental items arrived. 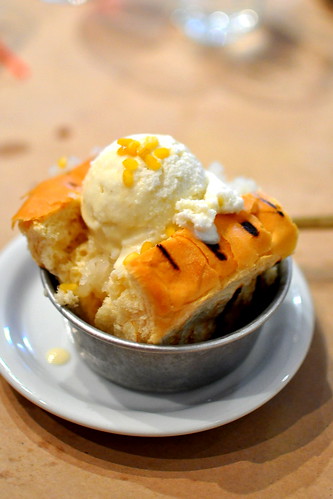 For dessert, the Chef sent out an ice cream sandwich that is “enjoyed in ghettos throughout Bangkok.” It was comprised of house made coconut ice cream, sweet sticky rice, condensed and evaporated milk, and toasted mung beans on a sweet roll. I adored everything about this ghetto-fabulous ice cream sandwich except the dry sweet roll, which was outsourced to a nearby Mexican bakery. The flavors offered a cool, sweet, and refreshing ending to a spice-filled supper.

I wasn’t sure what to expect as I cruised down the Sunset Strip to Night + Market, but this meal turned out to be one of the most exciting and interesting that I’ve experienced this year. Chef Yenbamroong’s approach to Thai food is bold, different, and seriously delicious. What can I say? He’s got a way with pork.