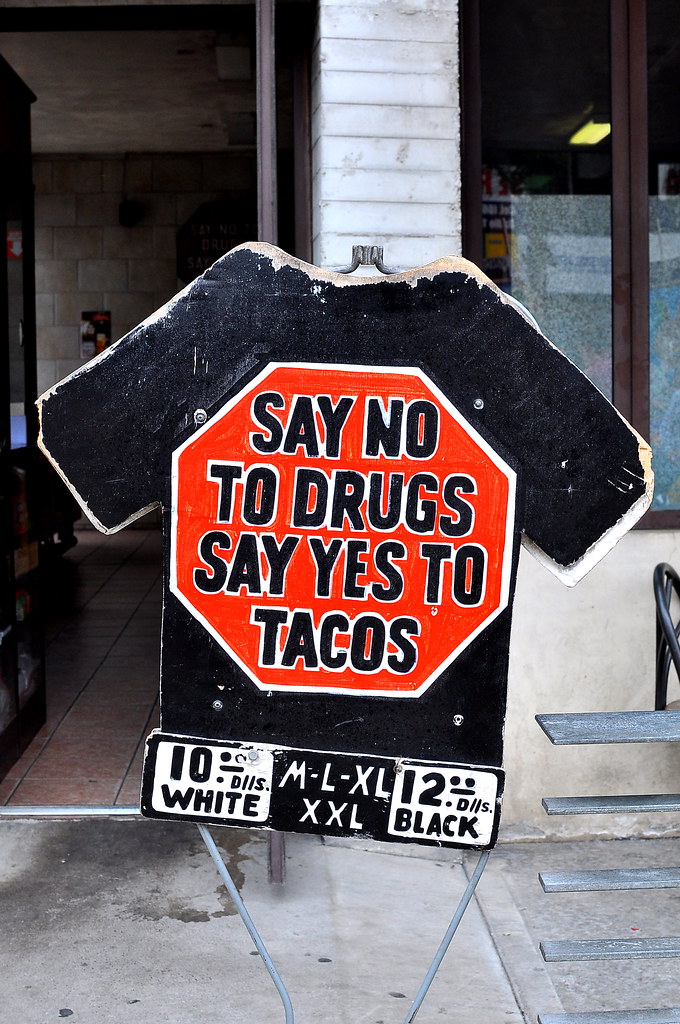 Following Sunday brunch at Scarpetta, I took a little jaunt down to Tijuana with my friend Bill. While escaping to Mexico for a day might be too hurried for some, it’s these impromptu getaways that I absolutely live for. After Bill picked me up in Beverly Hills, we hightailed it to the border, and not too long after, we were living large on Revolución. It had been well over a year since my last Baja eating tour, so I was beyond ready for another gluttonous spree.

After dropping off our bags at the hotel and freshening up a bit, it was time to cruise the streets for delectable Mexican eats. At my request, our first stop was at Tacos Salceados. I ate here on my first Baja culinary tour, but wasn’t able to enjoy it to the fullest since it was the eighteenth and final stop of a two-day eating blitz. I always hoped to return because even though my palate was beyond spent at the time, I remembered that the tacos totally rocked. The little taqueria was bright and bumpin’ when we arrived. We started off with a small plate of blistered blonde chilies and young spring onions dressed in a tangy Maggi-based sauce. “Salceados,” which translates to sauciers, is the creation of former saucier Javier Campos Gutierrez. The tacos served here are like nothing I’ve ever experienced before. Each creation has layers of flavors and pitch perfect sauces to boot. This evening, we ordered tacos filled with shrimp, salmon, pork, and beef.  They arrived wrapped in our choice of either corn or flour tortillas.

The most unique and sensational of the bunch was the taco dulce, which was comprised of a traditional protein wrapped in a fried cheese shell with a mango puree. On top was a strawberry and cherry puree, as well as chopped pecans. Each bite was an avalanche of sweet, savory, fruity, and nutty. The drive to T.J. is worth it just for a bite of this taco. After reliving the magic of Tacos Salceados, we jammed over to Tacos El Poblano for carne asada tacos. Bill scoffs at the stuff we call carne asada stateside and considers this place to be one of the best in T.J. The tacos here are made with a blend of New York steak, top sirloin, round, and chuck. The various cuts are coated with a blend of seasonings and grilled over mesquite. After the meat is cooked through, it is placed on a wood block and chopped into fine bits with a cleaver. Lastly, the meat is tucked inside two corn tortillas and served with diced onion and a slathering of Baja-style guacamole. The meat’s slight char was mellowed nicely by the creamy avocado dressing. The taco was so wonderfully moist that it dripped meaty juices down my elbows and onto my jacket. I didn’t mind one bit because tacos this good are worth getting a little messy for. Our final stop of the night was at Kentucky Fried “Buches,” also known as K.F.B. The specialty at this Red Light District haunt is deep-fried chicken necks. Buches, baby! Watching the scrawny chicken necks fry to a crisp in the murky oil was incredibly mesmerizing. I could’ve watched that steaming hot vat for hours on end. The crispy chicken necks were served hot from the fryer with a potent tomato salsa and warm tortillas. I took the less fussy route and gnawed on the necks straight-up. The ratio of meat to skin was skewed toward the latter, which was a win-win situation for this girl. K.F.B.’s fiery salsa should be bottled and sold at finer retailers across the globe. I woke up the following morning refreshed and ready to pound the pavement for more good eats. Since the weather was gray and well below seventy degrees, I requested a hot bowl of menudo for my first bite of the day. Bill led me to Rico Menudo Estilo Guadalajara located on the corner of Ocampo and Salvador Diaz Miron. This street vendor dishes out Guadalajara-style menudo from seven in the morning until she runs out, which is typically before 1 PM. We grabbed a seat at her stand and ordered a large bowl to share. The bowl of soup arrived loaded with tendon and tripe. Bill garnished it expertly with diced onions, fresh cilantro, dried oregano, and dried chilies. Served on the side were warm tortillas for dipping. This was my first introduction to menudo, and boy was it a great one. The pieces of tendon and tripe were pleasantly chewy, while the broth was spicy and soulful. On this slightly chilly day, I could not have asked for a more perfect breakfast. After we polished off our huge bowl of menudo, we moseyed on over to Revolución for churros. Piped with fruity jams, vanilla custard, chocolate, and dulce de leche, it was difficult to choose just one. Since I tried the dulce de leche on a previous visit, I went with the custard one this time.  It was smooth, cool, and creamy. Truly, it’s impossible to go wrong at the churros rellenos stand. Before heading off to an important press conference, which by the way was the motivator for our trip, we made one final stop at Tortas Wash Mobile for Tijuana-style tortas. We tried to eat at the original location on Jalisco, but it was closed this afternoon. Luckily, Bill knew of another location nearby. Tijuana-style tortas, which are perfected at Tortas Wash Mobile, are characterized by carne asada topped with tomatoes, pickled onions, and guacamole stuffed between toasted bread. It was a straightforward creation that was compact, satisfying, and so, so good.