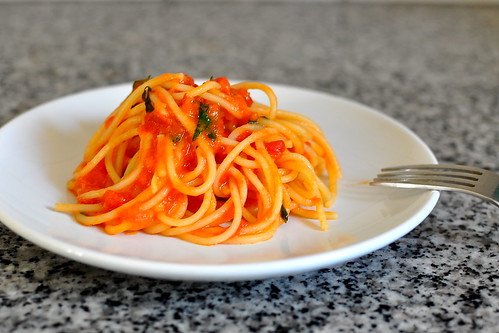 After perusing my recent post about brunching at Scarpetta, my brother emailed me a recipe for Chef Scott Conant’s famous spaghetti. Unlike the fussy versions I’d previously seen across the Internet, this one was noticeably simpler and even called for fewer than ten ingredients.

Published in New York Magazine in 2003, this recipe is originally from the kitchen of L’Impero, where Chef Conant cooked before opening Scarpetta. Due to the straightforward nature of the ingredients and instructions, I was skeptical that it would be able to recreate the true majesty of the original dish. My brother assured me that he had prepared it himself and that the results were identical to the plate of noodles once dished up at L’Impero and now Scarpetta.

I remained a skeptic up until the moment when the sauce began to come together. As I crushed the fresh tomatoes, melding them with the scorching olive oil, the smells and flavors wafting in the air were wholly familiar. Once I added in the basil, butter, and Parmigiano-Reggiano, and saw how tightly the chunky sauce clung to the strands of spaghetti, I knew for certain that my brother had not led me astray.

“He’s getting a roundness of flavor and nuance of sweetness that amount to pure Mediterranean bliss,” waxed Frank Bruni about the spaghetti in his three-star review of Scarpetta in 2008. This recipe captures the bliss that Mr. Bruni spoke of, as well as a subtle richness and gentle tanginess. It’s definitely the real deal. 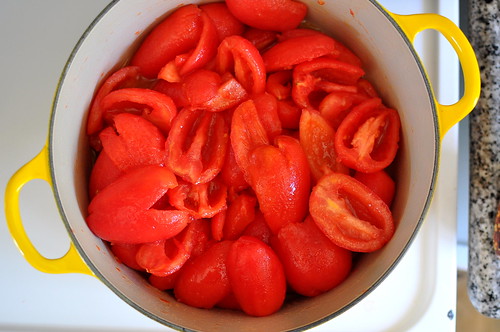 Add the olive oil to a pan and heat until it begins to smoke lightly. Add the tomatoes, 1 teaspoon of salt, 1/2 teaspoon of pepper, and the red-pepper flakes.

This step can get messy, especially when the tomatoes hit the oil, so use a lid to shield yourself and the stove top. Remove the lid once the tomatoes have settled into the heat. 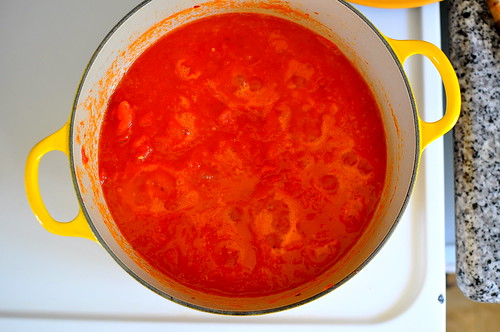 Crush the tomatoes with a potato masher, or a wire whisk, to release all their liquid. Cook for 25 minutes over medium to medium-high heat, until the tomatoes form a semi-chunky sauce. 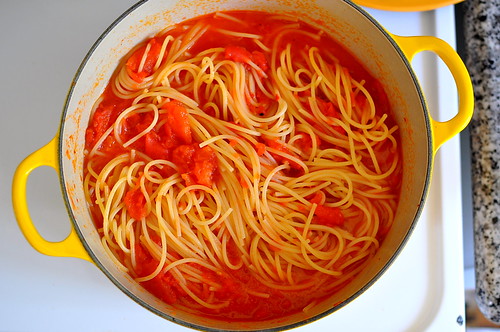 Meanwhile, bring a pot of salted water to a boil and add the spaghetti. When the pasta has cooked for three-quarters of the time stated on the package, drain it and reserve the water. Add the spaghetti to the sauce and cook over medium-high heat until all the liquid is absorbed and the pasta is al dente, stirring occasionally. If the sauce becomes too thick, add a little of the pasta water to thin out the sauce. 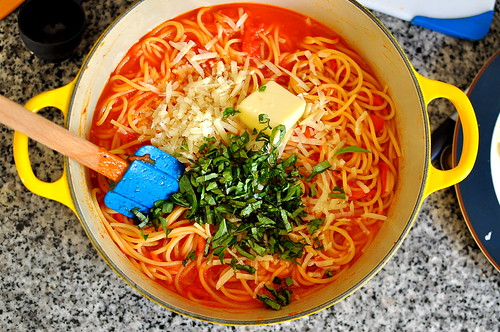 Remove from the heat and add the butter, basil, and cheese, mixing thoroughly until the pasta is an orange hue. Season to taste with salt. 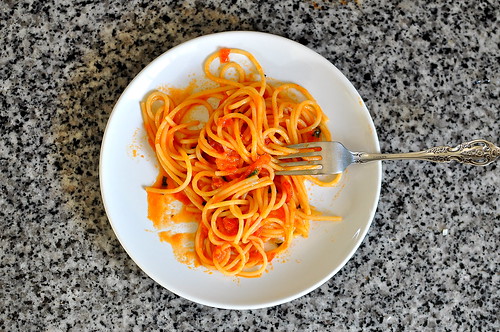 20 thoughts on “Scott Conant’s Spaghetti with Tomato and Basil”