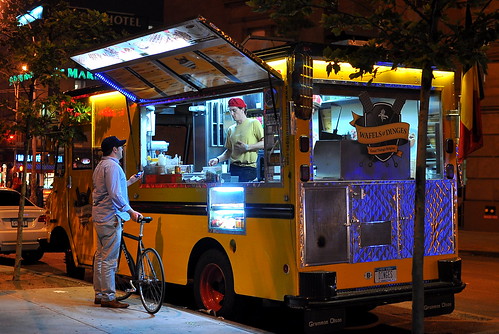 As The Astronomer and I strolled from ChikaLicious back to the hotel, we stumbled upon the Wafels & Dinges truck at Astor Place. Even though I had just consumed a hefty Italian dinner followed by a three-course tour de sweets, I couldn’t resist stopping for a taste. I live a gloriously gluttonous existence while on vacation. Plus, I didn’t know if I’d run into the truck again. 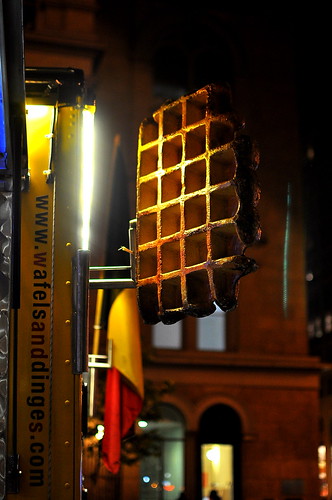 Belgium native Thomas DeGeest launched Wafels & Dinges in 2007. Since then, it’s grown into a mini waffle empire complete with one roaming truck, two roving carts, and two permanently parked carts in Central Park. The truck even has a hotline for waffle seekers to keep track of all the action.

I’ll admit it, I was so intent on trying this truck that I programmed the number into my phone before leaving town. I am a waffle lover through and through. 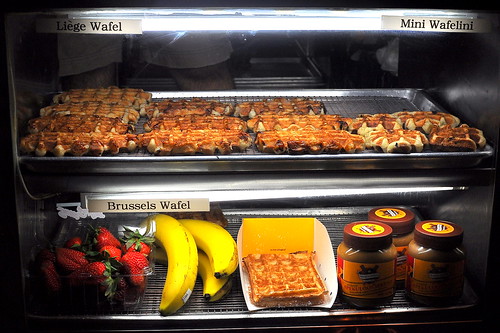 The truck offers three different kinds of waffles: Brussels, Liège, and mini “wafelini.” There are also a plethora of “dinges” including fresh fruit, butter, maple syrup, and whipped cream. 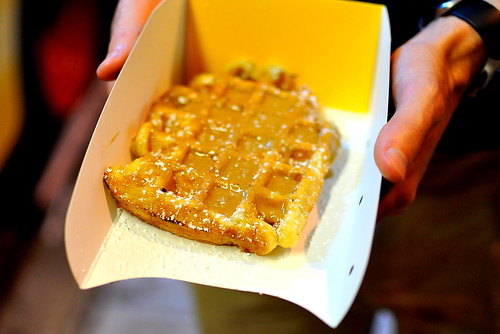 I had my sights set on the Liège waffle with Speculoos ($5). The service on board the truck was extremely efficient; only thirty seconds passed between placing my order and having it in my hands. I probably should’ve listened to Ed Levine and insisted on a freshly made waffle, but I took what I was given and dug right in.

While the waffle’s flavor was very good, its texture and temperature were compromised from sitting under the truck’s florescent lights. I like my Liège waffles served up hot with crisp and caramelized edges, a flaky interior, and plenty of pearl sugar to gnash in between my teeth. This one wasn’t terrible by any means, just not as awesome as it could’ve been had it been freshly made. Lesson learned. Listen to Ed.