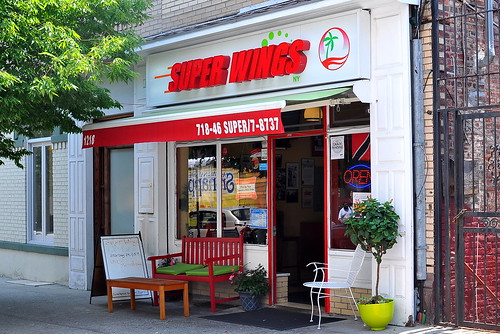 Super Wings NY, a Brooklyn purveyor of Caribbean chicken wings, has been on my must-eat list ever since it appeared on Throwdown! with Bobby Flay. In the episode, Trinidad native Colette Burnett swiftly kicked Bobby Flay’s butt with her unique blend of island spices and wing slinging know-how.

I usually don’t retain most of what I watch on TV, but the promise of  deep-fried wings saucily coated with tangy tamarind and hot chilies was enticing enough to sear the restaurant’s name in my mind for good. 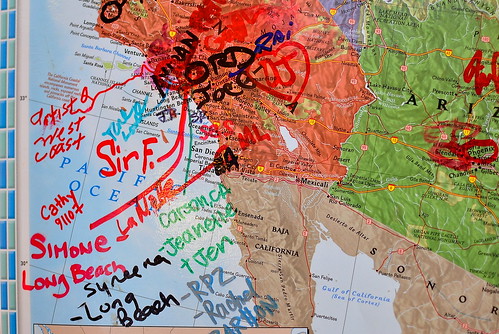 The Astronomer and I met up with our Brooklyn-dwelling friend Sara and her Queens-dwelling friend Kara for lunch at the Crown Heights shop. It’s a small joint with minimal space for dining in and a flatscreen television with Throwdown on constant loop. There’s also a large map of the USA for patrons to make their marks. I initialed somewhere in the Pacific Ocean… 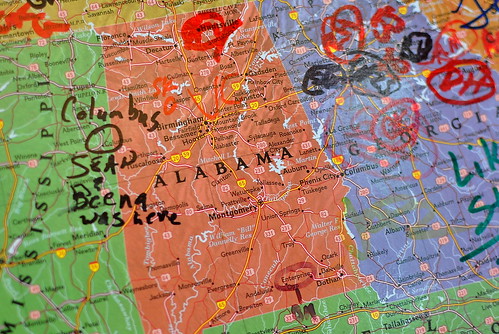 …while Sara and The Astronomer signed in Alabama. 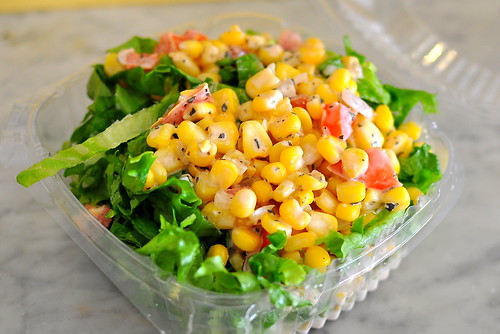 After twenty minutes of shooting the breeze, our food was ready for pick up at the counter. We started with three salads that were similar in composition. The base of each one was chopped green romaine, while the dressing was herbaceous and creamy.

The “corn and basil salad” was forgettable, mostly because the corn came from a can and the basil was dried rather than fresh. 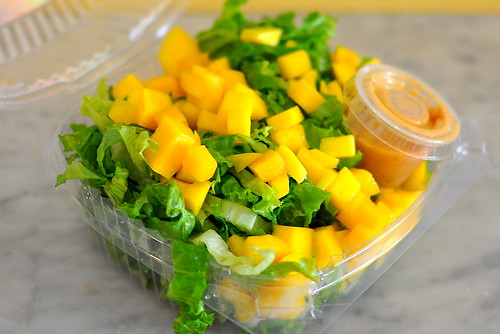 The verdict was similar for the “mango salad.” We were all expecting something more interesting than just greens topped with chopped fruit. 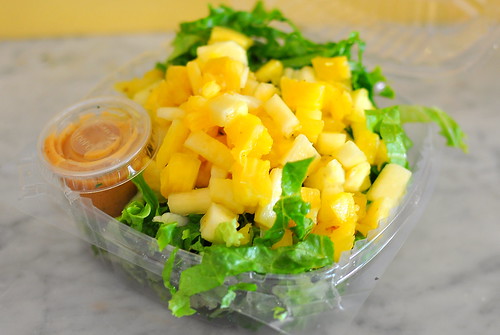 The story was the same with the “pineapple salad.” Had we known that all three salads were going to be more or less the same, we would’ve ordered just one and sampled different side items, like the “cassava oil down” or the “barefoot rice.” 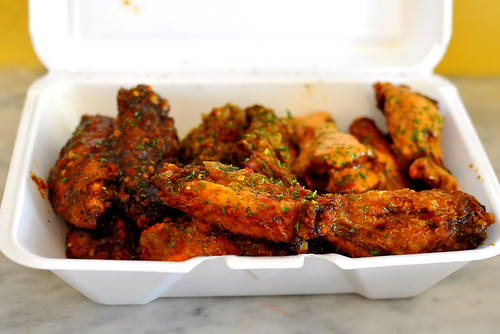 While our starters didn’t titillate our taste buds, the wings certainly did. We ordered eight of the ten flavors on offer, including Lava, Pineapple Jerk, Chili Cilantro, Trini Tamarind, Merry Mango, Ginger Buff, Lucian Honey Mustard, and Spice Island Rubbed. All of the wings were marinated for a full day before making their way to our table. 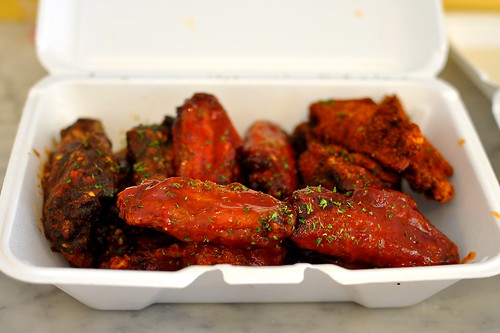 Since the wings weren’t clearly labeled with each variety, we dug in and tried our best to match up the spicing profile with its descriptor. It was a saucy and finger lickin’ delicious undertaking. 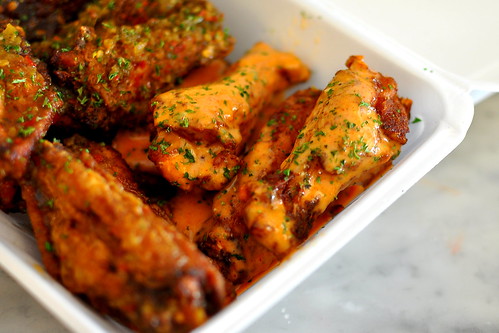 Of the flavors we could make out, the wings covered in Lava sauce really excited our palates. The restaurant’s signature sauce was sweet at first, but brought some serious heat toward the end that seemed to linger long after the last bite. We also loved the boldly flavored Trini Tamarind and the Chili Cilantro. For those who’d like to avoid a fiery experience, the Lucian Honey Mustard is the way to go. 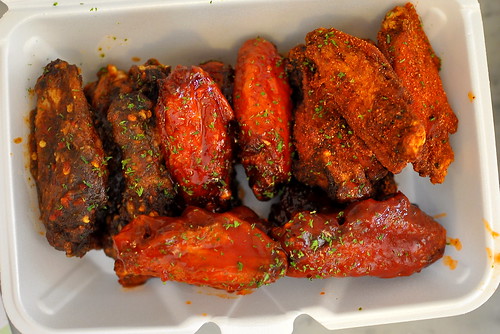 Our only complaint was that the wings were served room temperature rather than hot. If these babies had been fresh out of the frier, it would’ve skyrocketed them from very good to otherworldly. Even though the wings weren’t picture perfect like on TV, I’m still glad that I made my way to Crown Heights. The truly unique Caribbean sauces and rubs are where it’s at.