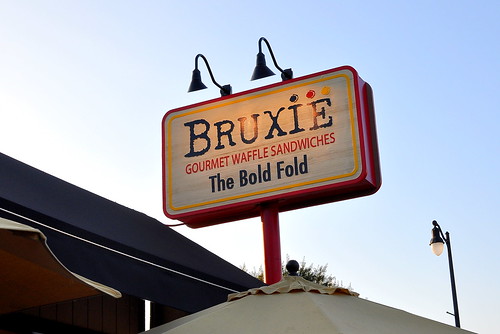 The only thing that kept me from dining at Bruxie the moment I finished reading Ila‘s glowing report back in March was forty-some-odd miles. It seemed excessive to brave an hour of traffic in a quest for a waffle sandwich, even if said sandwich came stuffed with coleslaw and fried chicken. So, even though I had Bruxie on the brain, I decided to hold out until I found myself hungry and in Orange County, whenever that would be.

The stars aligned for me and Bruxie one Friday evening in June. My mom, cousins Megan and Madison, and I were driving from Los Angeles to San Diego and needed a break from the bumper to bumper traffic. It just so happened that Bruxie was a short detour from the highway and we were in dire need of dinner. 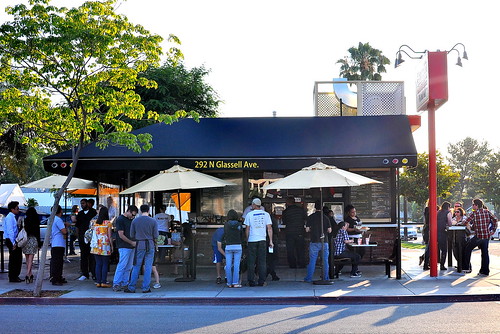 A trip through Belgium years ago inspired three friends—Dean Simon, Philippe Caupain, and Kelly Mullarney—to get into the waffle business. They’ve been selling waffle mixes to hotels and cruise lines for the past five years and opened this brick and mortar in downtown Orange last year.

We were slightly intimidated by the line snaking down the sidewalk when we arrived at the shop, but it moved impressively swiftly. Before we knew it, it was time to place our order and figure out where to sit. Note: there is no indoor seating or bathrooms available on the premise. 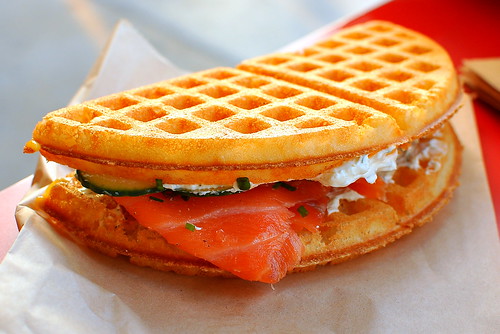 The food was delivered to our table soon after we scored a seat. All of the sandwiches are built upon yeast-leavened Belgium waffles that are light, crisp, and not the least bit sweet.

Cousin Maddie ordered the smoked salmon Bruxie ($7.95), which included dill cream cheese, thin slices of English cucumbers, and fresh chives. Even though Maddie is barely fifty pounds and still requires a child seat when riding in a car, she can tuck away some serious grub. After removing the pesky cucumbers from her Bruxie, she polished it off like a champ. That a girl! 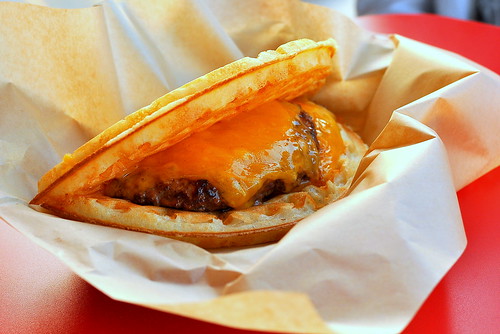 Cousin Megan ordered the Bruxie burger ($6.95) without tomatoes, mayonnaise, lettuce, or pickles because she likes her burgers simple and unfussy. The Angus beef patty topped with melted cheddar cheese came neatly tucked between the fold. I didn’t score a bite of Meg’s burger, but she seemed to dig it very much. Just like her ‘lil sis, Megan finished off her Bruxie with ease. 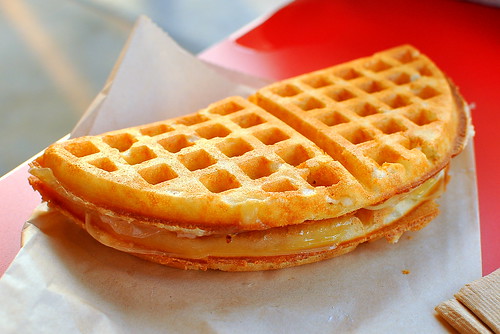 My mom’s prosciutto and gruyere Bruxie ($7.95) was garnished with whole grain mustard and fresh chives. It was the most subdued Bruxie of the bunch, but still satisfying nevertheless. Mom was pleased with her selection. 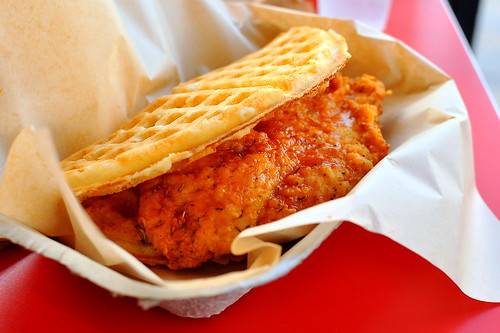 After months of patiently waiting, I finally got my paws on a buttermilk fried chicken and waffle Bruxie ($6.95). The bulbous package was made even more so with the addition of coleslaw underneath the chicken. The slab of all-white meat was freshly fried and slathered with chili honey.

While the textures of the chicken and waffles were superb, their flavors were mostly muted. The coleslaw lacked any zing, while the chicken was plain bland. To remedy the situation, I grabbed some hot sauce and salt from the condiment counter to spruce my Bruxie up. The bites that followed were much more balanced and delicious. 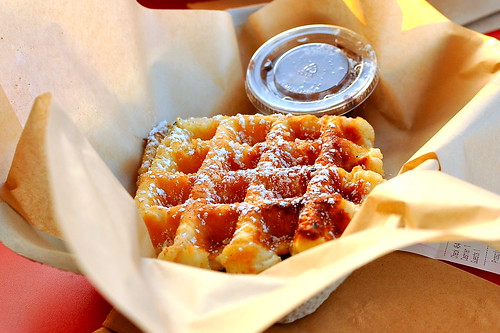 For dessert, we shared a Liege waffle with Nutella ($3.95). The waffle looked promising, but it turned out to be lukewarm and not freshly made. I let my cousins finish it off because their taste buds aren’t fully developed yet. 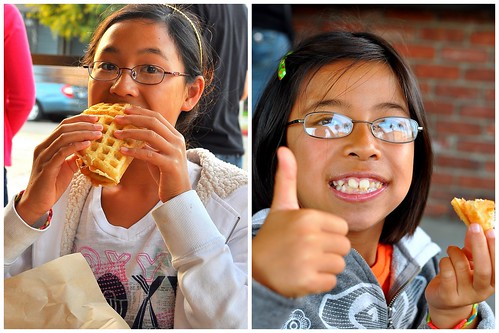 Our party of four had a very lovely dinner at Bruxie and we wouldn’t hesitate to return if we found ourselves in the vicinity of downtown Orange again. Who knew waffle sandwiches made such good road food?