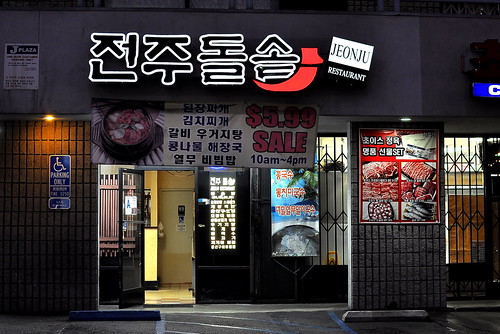 The Astronomer and I have a long history with The Wiltern, Ben Folds, and Koreatown. Well, maybe “a long history” is pushing it a bit. Back in 2008, we attended a Ben Folds show at The Wiltern and enjoyed dinner beforehand at Tofu Village. The convenience couldn’t be beat, and the flavors left our mouths pleasantly afire.

Ben Folds and company recently returned to Los Angeles to play another gig at The Wiltern. We once again scoped out a K-Town dinner prior to filing into the venue. The Wiltern’s proximity to great Korean eats means that The Astronomer and I are always well fueled to stand still for the duration of the show. 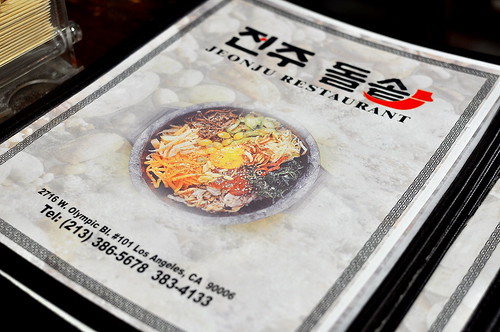 Jeon Ju was written up in the Los Angeles Times sometime back in 1998 by the lovely Barbara Hansen, but I learned about this place from my friend Matt. He promised me that the house special sizzling rice bowls were worth checking out the next time I found myself hungry for carbohydrates in Koreatown. 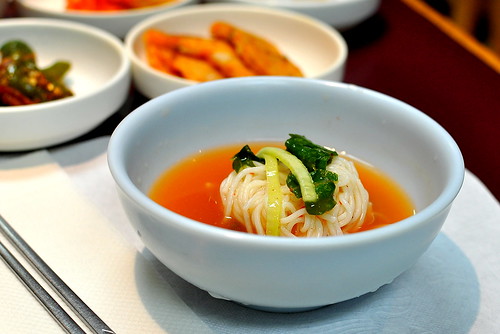 After settling into our seats and placing our order, two complimentary bowls of cold noodles came our way. The soup was mostly thin and not too spicy, while the noodles were tightly bundled in the center of the bowl. Even though it wasn’t a particularly warm evening, both The Astronomer and I slurped up the broth, noodles, and all. 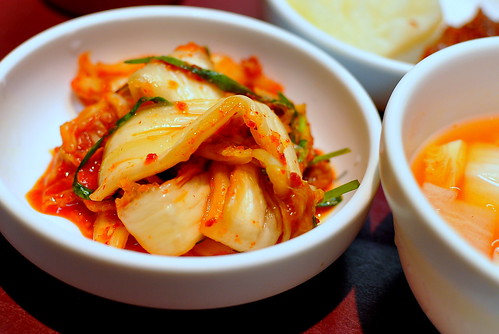 The selection of banchan at Jeon Ju included three different varieties of kimchi. There was the classic pungeant kimchi made from Napa cabbage… 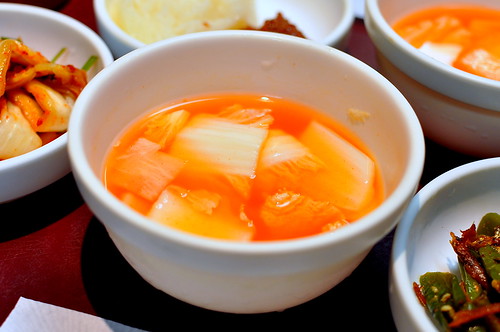 …as well as a milder “water kimchi” and snappy raddish kimchi (not pictured). 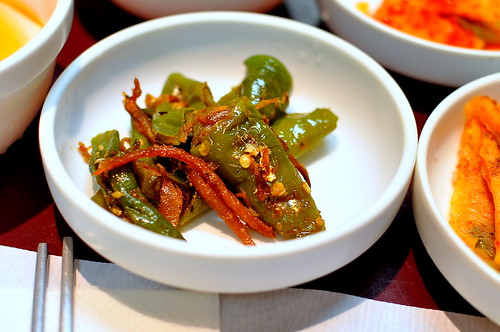 The little dish filled with oily anchovies and jalapenos offered a double punch of funk and spice. I kept reaching for it throughout the meal whenever I needed a swift kick in the mouth. 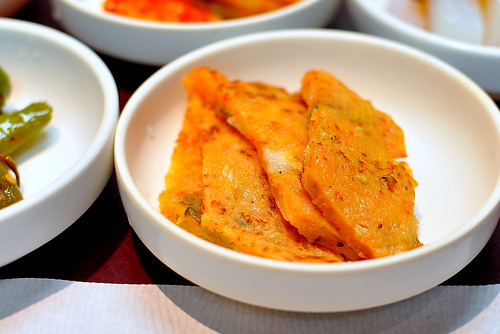 The fried fish cakes were a little sweet, kind of spongy, and only slightly reminiscent of the sea—just the way I like ’em. 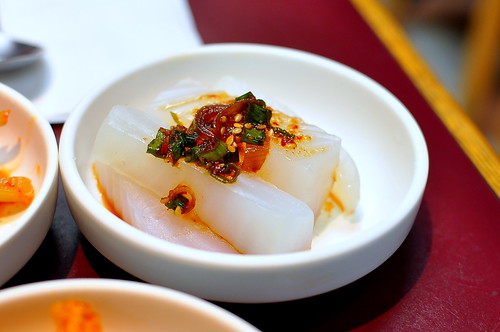 And lastly, cool rectangles of acorn jelly topped with a scallion, sesame seed, and soy dressing. 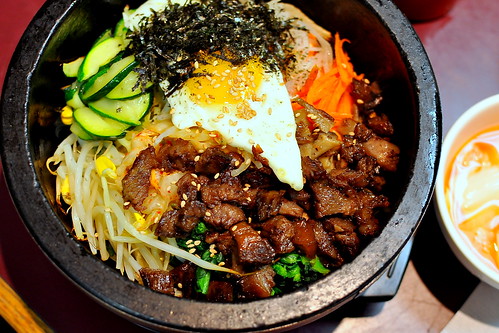 After grazing on the banchan for a quick moment, our main courses arrived. The kalbi bi bim bap was served in a clay bowl, which emanated a sizzle that seemed to echo on and on. It must’ve been twenty minutes into our meal before the sound finally hushed.

The presentation was almost too pretty to douse in chili sauce and mix about, but we did what we had to do. The kalbi was well-seasoned, the array of vegetables were crisp and bright, and some of the rice had the most delightful crust imparted from the clay pot. An additional runny egg would’ve been excessive, but welcomed—I can’t get enough of rich egg yolks. I haven’t eaten nearly enough bi bim bap to declare this one tops, but damn, it was really good. 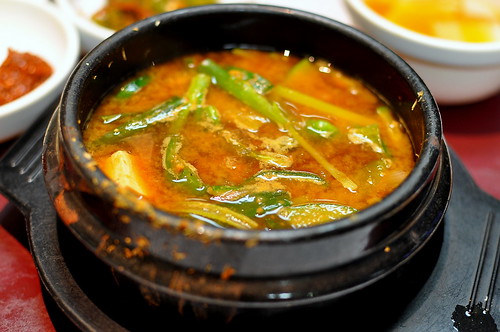 In addition to bi bim bap, Matt also recommended the doenjang chigae (soybean paste stew). It arrived steaming and bubbling aggressively in a clay pot with cubes of silken tofu and stalks of virtuous greens floating about.

I found the stew’s flavors mild, but interesting; it turned out to be a great contrast to the spicy sizzling rice next door. The lady working the cash register suggested that I try the fermented soybean paste stew next time for a funkier stew experience. I’m totally down. 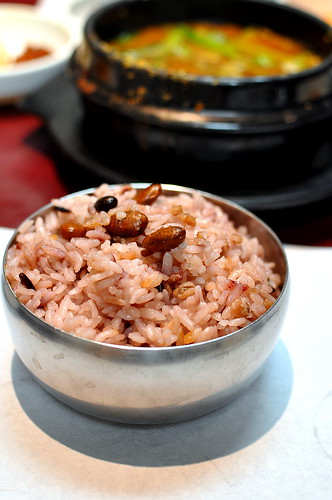 Served alongside the stew was a bowl of “brown” rice dotted with beans that our waitress assured me was super healthy. The combination of rice and stew was comforting and homey in the best way.

Truth be told, I enjoyed the pre-show grubbing more than the show itself. Maybe I’m just not cut out for concerts where no one dances or moshes. Still, the next time Ben comes to town, we’ll be there to woot him on. And the cycle will repeat once more.