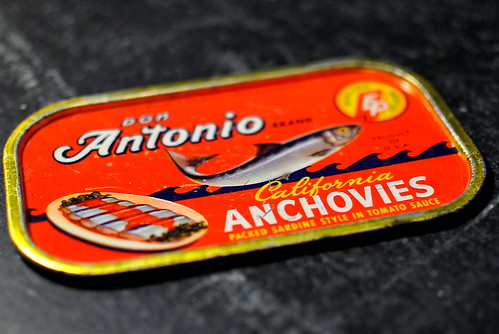 I like to visit restaurants that are “so-hot-right-now” after they’ve had a chance to cool off a bit. This sentiment isn’t popular among fellow food bloggers (ahem, Kevin and Darin), but I can’t deny that I like my restaurants worn in and comfortable, like an old pair of sneakers.

Some eight months after Son of a Gun opened its doors, my friend Lien and I made our way there for dinner. Whereas chefs Jon Shook and Vinny Dotolo focused on nose to tail cooking at their first restaurant, Animal, this follow up effort draws inspiration from coastal seafood shacks. 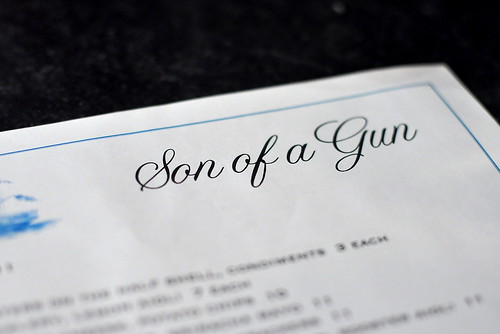 The 55-seater was packed when Lien and I walked in on a weeknight. We were expecting to be relegated to the communal table since we didn’t have reservations, but were fortunately given two seats at the bar after waiting for twenty minutes. While sharing the communal table would’ve been festive and cozy, Lien and I preferred the relative seclusion the bar offered. 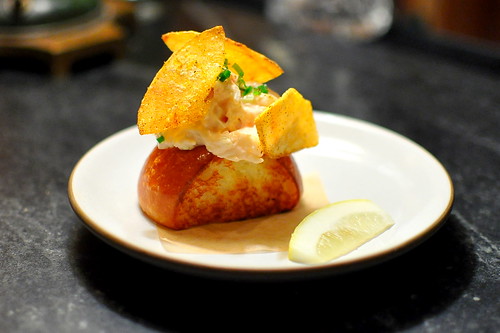 Since neither of us had eaten here before, we ordered a mix of Son of a Gun’s most popular dishes and ones that read interestingly on the menu.

Lien and I split the roll down the middle. We were prepared to order another serving if necessary, but it turned out that a bite and half each was all that was needed to take in the rich and creamy sandwich. 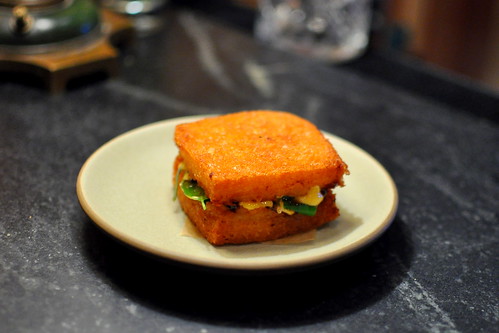 Soon after we finished off the lobster roll, the shrimp toast sandwich ($11) was delivered. It was comprised of itty bitty shrimp smothered in Sriracha mayo between two slices of buttered and browned toast. The flavor profile here was nearly identical to the first course—buttery, rich, and creamy. I yearned for more shrimp and less dressing. 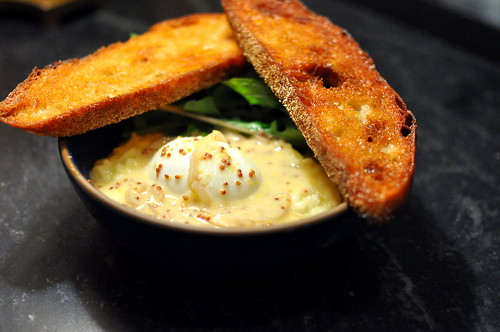 The next dish to arrive was the “brandade, soft egg, arugula, grainy mustard” ($13). I was looking forward to some funky fishy action, but alas, the brandade turned out to be more potato than salt cod. After polishing off the runny egg, Lien and I left the bowl of mashed potatoes and bitter greens mostly untouched. Sadness. 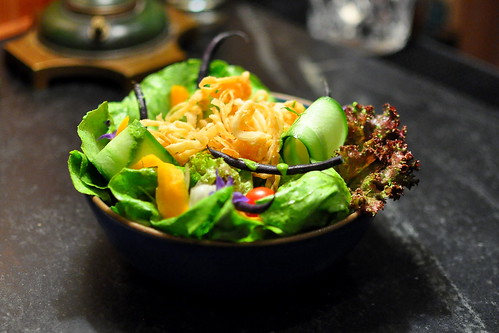 Taking a break from the fruits of the sea, we shared a bowl of “lettuces, green goddess, avocado” ($12). We were expecting a good amount of avocado in the salad from the menu’s description, but that unfortunately wasn’t the case. What we received was a small bowl full of mixed greens, cherry tomatoes, carrots, purple beans, and crunchy fried wonton bits. For $12, we expected something with more flare. 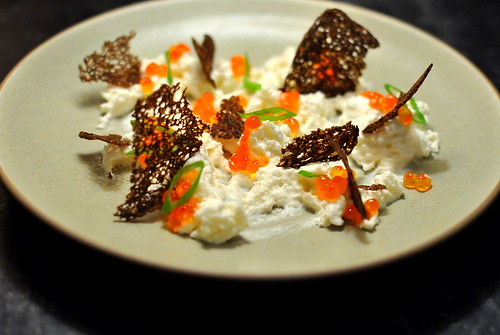 The least successful dish of the evening was the “smoked steelhead roe, maple cream, pumpernickel” ($14). The “maple cream” consisted of sweet maple-flavored whipped cream rather than a smooth spread, which paired strangely and ineffectively with the roe. Our forks plucked the roe from the landscape and left everything else on the plate. 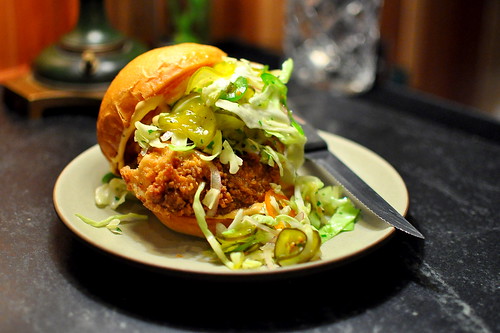 By the time the fried chicken sandwich ($11) arrived, I was ready for a winning dish. The chicken was impressively moist with a well-seasoned coating, while the bread and butter pickle slaw was awesomely spicy. The cook was heavy-handed with the rooster aioli, but that didn’t stop me from enjoying the sandwich very much. 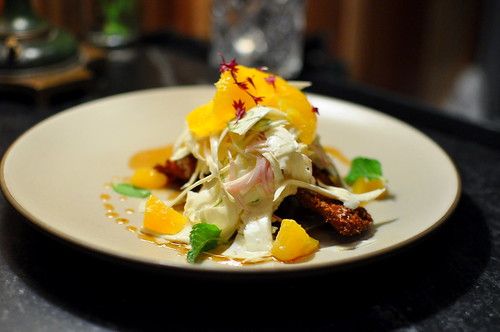 The final savory plate of the evening was the alligator schnitzel ($17) with a heart of palm slaw and orange segments. I took the bulk of the schnitzel home because I’d had my fill of deep-fried and creamy stuff for one night. It tasted great the following day, cold from the fridge, with rested taste buds. 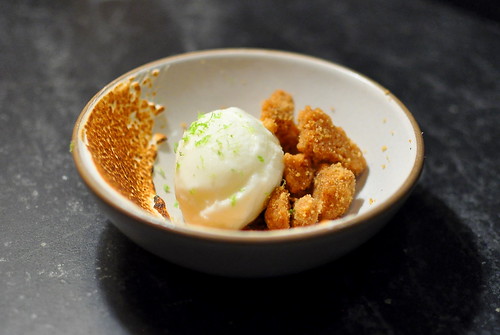 To finish, the most refreshing frozen lime yogurt with graham crumble and toasted meringue ($5). The dessert was so simple and yet so perfect at the moment.

Following our meal, I Tweeted that Son of a Gun was “creamy, deep fried, and that’s about it.” Our suite of six similarly composed dishes left me feeling overwhelmed and overfed. If a future visit were in the cards, I’d stick to the fresh oysters, crudo, and one carefully chosen deep-fried and creamy creation. And of course, lime yogurt for dessert.