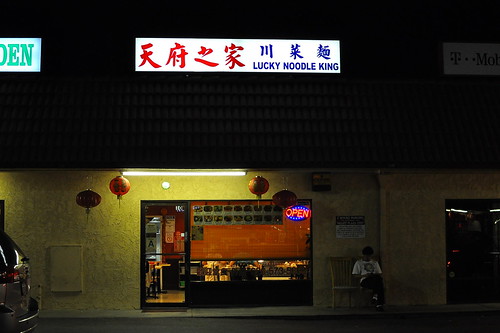 Of all the regional Chinese cuisines represented in the San Gabriel Valley, The Astronomer and I are least familiar with the dishes from Sichuan. The specialties from this region are famous for their tongue numbing peppercorns and mountains of dried chilies, and while The Astronomer and I love spicy foods, sweating through an entire meal can be an intimidating affair. 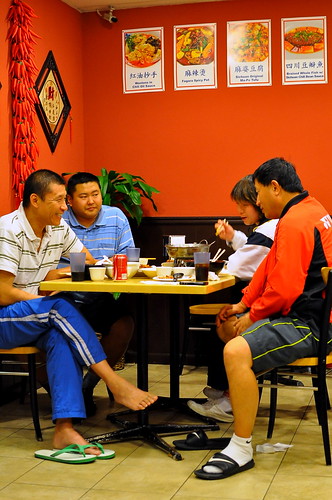 Still, we can’t resist a great food adventure now and again. Feeling hungry and daring one Saturday night, we headed to Lucky Noodle King for a late dinner. The crowd was minimal at this time, just a family of four in the corner and a group of flip-flop sporting fellas in the center.

The restaurant’s walls were painted a fiery shade of red with ornamental chilies hanging here and there. Clearly, a sign of good things to come. 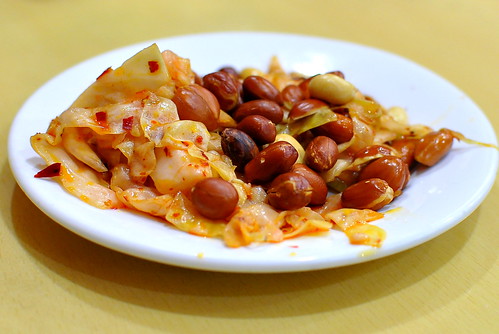 While we perused the menu, the restaurant’s lone and lovely waitress brought over a plate of peanuts and shredded cabbage for us to snack on. The cabbage tasted of sesame oil and Sichuan peppercorns with a kick that had a way of lingering. 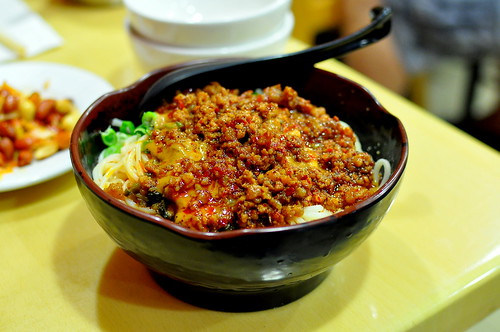 The dish we were most excited to try was the dan dan noodles. Lucky Noodle King’s owners previously ran Chuan Yu Noodle Town, home of the most famous dan dan noodles in town. They’re carrying on the tradition of excellence at their new restaurant, where the fresh noodles and the biting, yet creamy sauce make for an extra special version of the dish. The dan dan noodles here are an event. 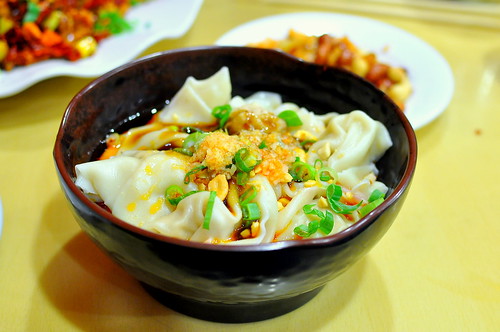 Delicately wrapped and punched up with minced garlic, the wontons in chili oil were great as well. The proportion of meat to wrapper was skewed toward the latter, which was fine by me because I have a thing for silky wonton skins. In fact, I used to eat the meat filling first and save the skins and broth for last when I was a kid—I’ve been a carbohydrate lover all my life. 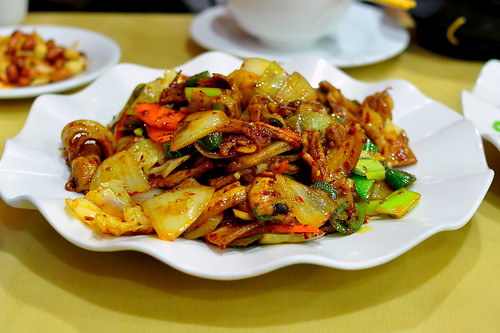 The Astronomer didn’t warm up to the twice-cooked pork, but I had a soft spot for it. The thin slices of belly were stir-fried to a caramelized crisp along with cabbage, onions, leeks, carrots, jalapenos, and dried chilies. Salty and spicy, this dish was made to be paired with a steaming bowl of  white rice. 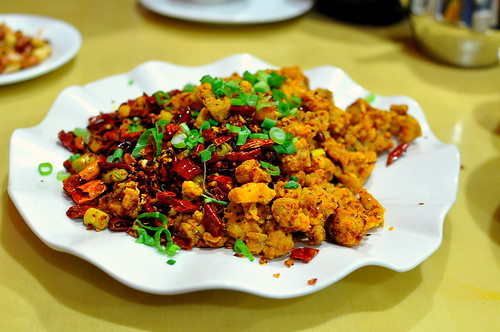 Our final dish was supposed to be “Crazy Flavor in Savory Spiced Eel,” but alas, the restaurant had run out by the time we arrived. We ordered the Chong-qing fried chicken instead, which turned out to be an excellent substitution. The boneless chicken nuggets were wonderfully crisp and fragrant with the distinct essence of Sichuan peppercorns.

The Astronomer and I totally got lucky at Lucky Noodle King. Every dish that we ordered was a hit, and the spicing wasn’t too outrageous for two kids from Pasadena. Next time, the Crazy Flavor in Savory Spiced Eel will be ours.