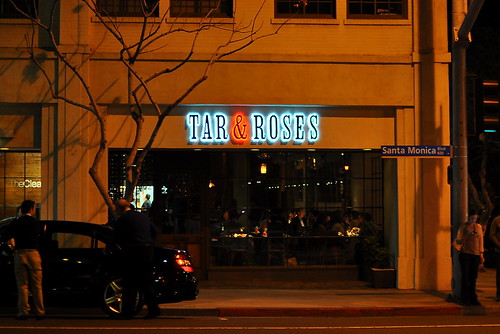 Tar & Roses has been humming and happening ever since it opened just under a month ago. Named after the tasting notes characteristic of wine made from Nebbiolo grapes, Tar & Roses serves up big and small plates in a lively neighborhood setting.

I came in for dinner last week with my friends and fellow food bloggers Darin and Esi. As guests of the restaurant, we were completely spoiled by chef and owner Andrew Kirschner—he sent out way too much food and we in turn ate more than our fill! It was a delightful evening, one that left me waddling out the front door with a smile on my face and doggie bags in hand. 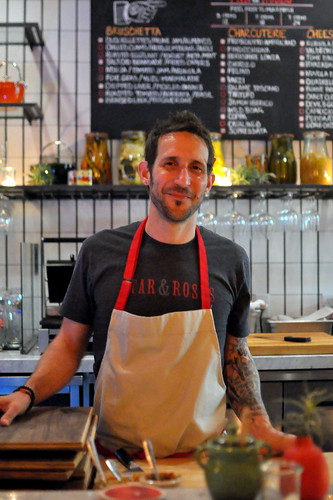 Prior to opening Tar & Roses, Chef Kirschner spent the last decade honing his craft at Joe’s in Venice, Chadwick in Beverly Hills, Table 8 in West Hollywood, and Wilshire in Santa Monica. He was named “Best New Chef in 2008” by Angeleno magazine. 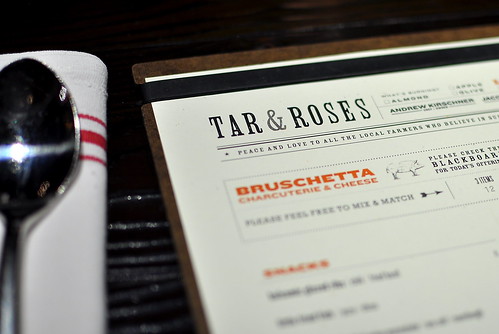 Chef Kirschner’s “modern and rustic” menu is divided into four sections: Snacks, Small, Veggies, and Large. There’s nothing I love more than grazing over half a dozen plates rather than sticking to a single main course. The menu here is just my speed. 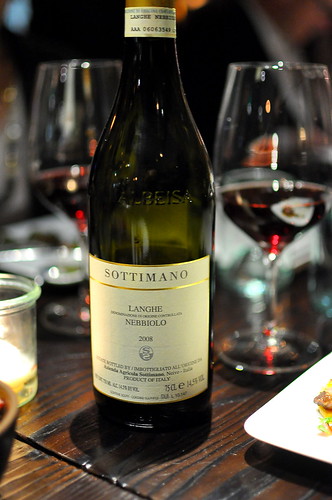 Taking a cue from the restaurant’s name, our waiter suggested that we share a bottle of the 2008 Sottimano Langhe Nebbiolo from Piedmont, Italy. I detected neither tar nor roses on my palate, but the full bodied red held up well to Chef Kirschner’s parade of dishes. 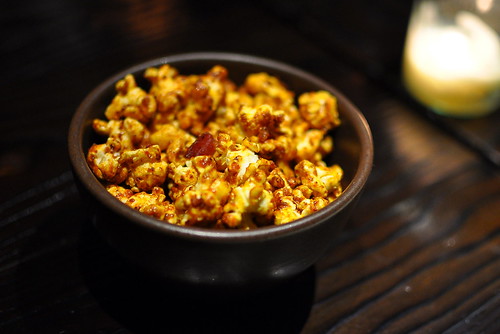 Things got off to slammin’ start with a bowl of caramel corn spiked with chili and dotted with bacon ($6). I couldn’t keep my paws off the bowlful of sweet, spicy, and salty. 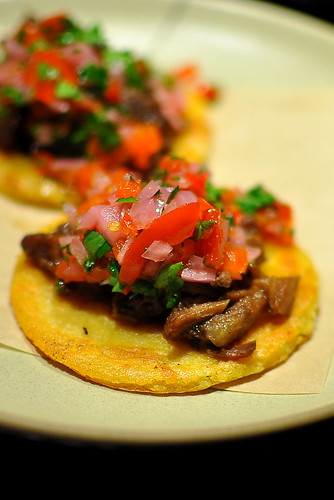 The second dish, an off-the-menu special Chef Kirschner sent our way, was comprised of chickpea pancakes topped with short ribs and pico de gallo. It was simultaneously cool and warm, crisp and stewed. 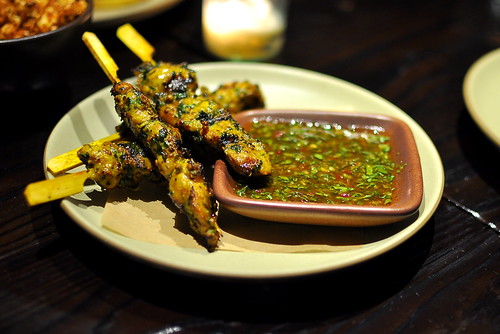 One of my favorite bites of the night was the chicken oysters on a stick  ($7) served with a cilantro and tamarind sauce. The oysters, round pieces of dark meat on the back of poultry near the thigh, were juicy little things. 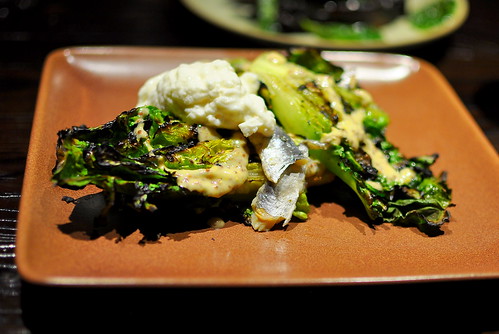 The kitchen’s wood-fired oven imparted a nice char on the little gem lettuce with pickled sardines, burrata, and Dijon mustard dressing ($10). The assertive sardines really made this dish for me. 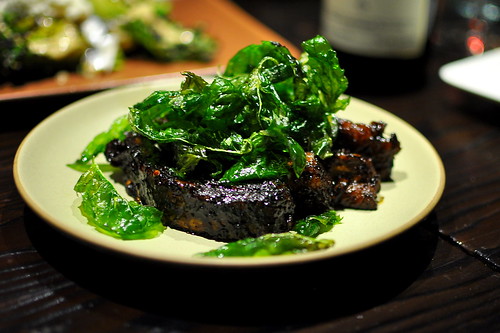 The sticky and sweet ribs garnished with fried basil was another off-the-menu dish that Chef Kirschner bestowed upon us. The meat felloff the bone without much jaw power. 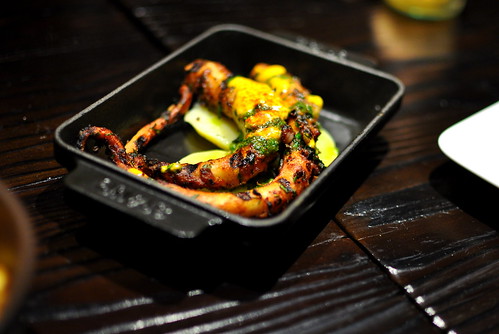 The charred octopus with salsa verde and piquillo pepper aioli ($9) was cooked to perfection. I wished that The Astronomer could have been present to taste these tentacles; he loves well-executed octopus. 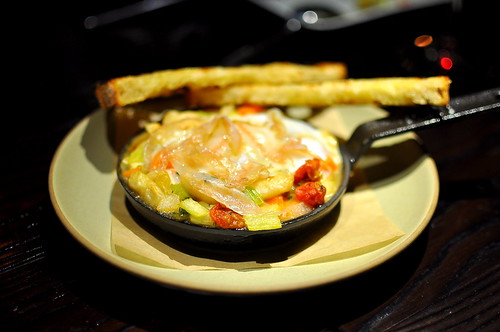 The wood fired duck egg with gigante beans, tomato, and guanciale ($10) took my taste buds to breakfast time. I was in dinnertime mode, so I didn’t give this skillet as much attention as I probably should have. 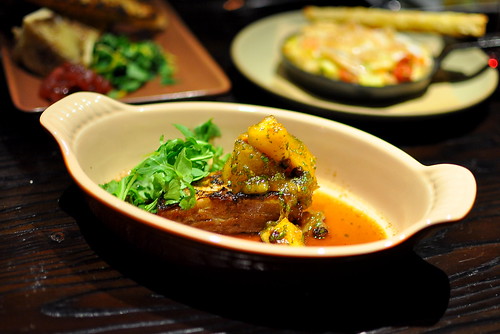 The lamb belly with minted apple chutney ($9) had me completely smitten. The hunk of impossibly tender flesh and fat countered the chutney’s sweetness just right. 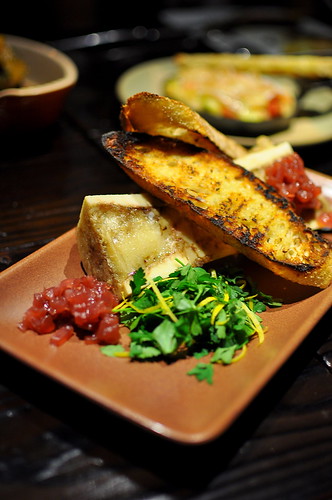 And then there was the beautifully roasted bone marrow with pickled onion marmalade, gremolata, sea salt, and sourdough ($9). Chef Kirschner has a way of composing plates that are fantastically well balanced, where every yin has its yang. 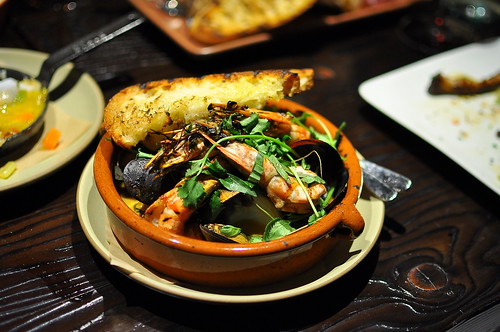 Tar & Roses will begin serving “T&R Suppers,” three-course meals presented family style, in a couple of weeks. The menu options will include wood-fired goat, whole goose, standing rib back, and this shellfish pot.

Our pot this evening was brimming with clams, shrimp, and mussels in a red curry broth. The seafood was stellar and the curry-soaked bread was even better. 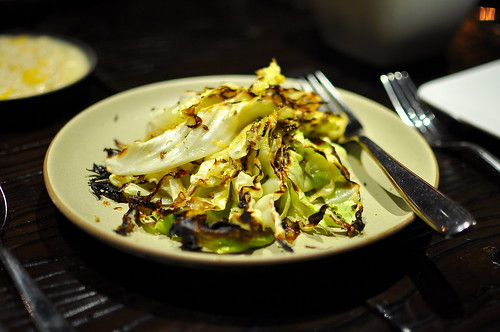 For the final wave of savory dishes, Chef Kirschner sent over a slew of “Large” proteins and “Veggies.” My favorite vegetable of the bunch was the wood-roasted cabbage with caraway and fennel ($7). This simple preparation highlighted cabbage in a delicious and novel way. 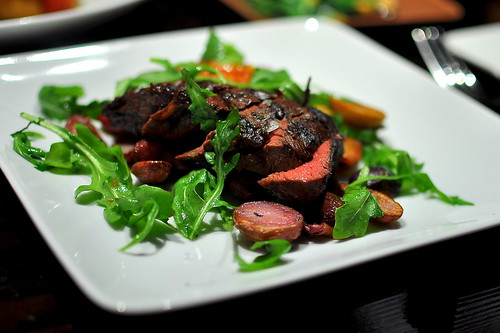 The hanger steak with duck fat potatoes ($23) was pink in the center with an intense char on its exterior. The shards of salt atop the meat were a nice touch. 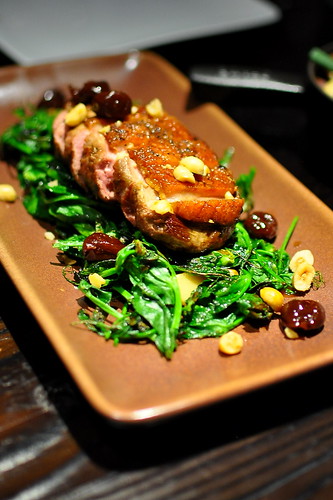 The duck breast with pea tendrils, dried cherries, and hazelnuts ($24) was too pink in the center for some, but I like my animals bloody and embraced it wholeheartedly. I was beyond full at this point, but managed a sliver of succulent duck paired with rehydrated sour cherries. It was a winning combination. 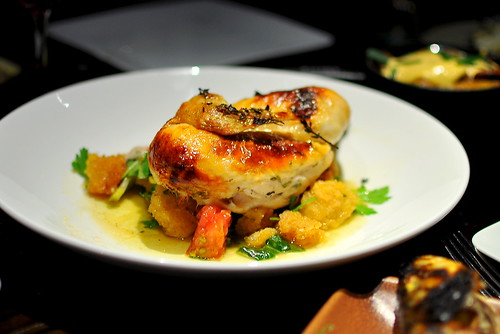 Chicken made a second appearance this evening in the form of a wood-roasted half bird ($19). The highlight of the platter was the heirloom tomato bread salad that soaked up the chicken’s savory juices. Frying bread in olive oil can never be a bad thing. 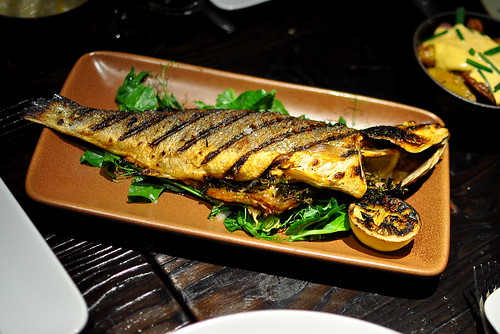 The final protein was a whole wood-roasted branzino served with a Meyer lemon risotto ($24). I stole a few bites of the insanely crispy skin—it’s my favorite part of the fish. 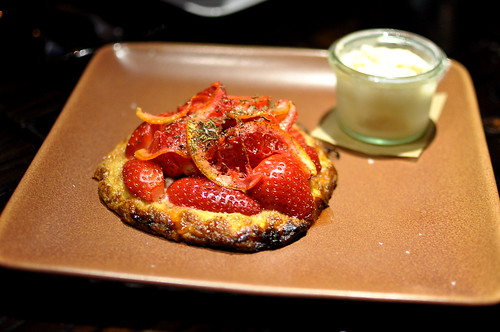 The kitchen sent over a duo of desserts to wrap up this epic feast. The strawberry and blood orange crostata with L.A. Creamery honeycomb ice cream was lovely to no end. 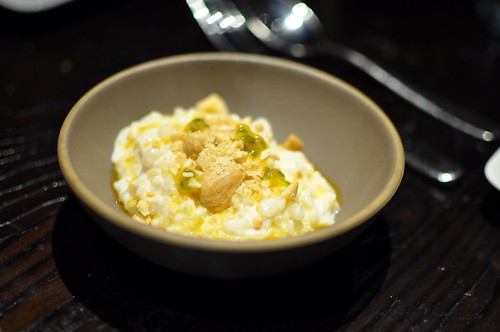 As was the rich and creamy rice pudding with passion fruit and almonds. I am a fruity dessert lover through and through.

As my party was wrapping up our evening, we bumped into some friends coming in for late night bites. When they asked me what dishes were a must, I simply told them to order whatever sounded good on the menu because everything here was executed with precision and care. They did just that and walked away as stuffed and happy as I did.

Chef Kirschner’s got a good thing going here. If I lived within a ten mile radius, I’d be a regular for sure.