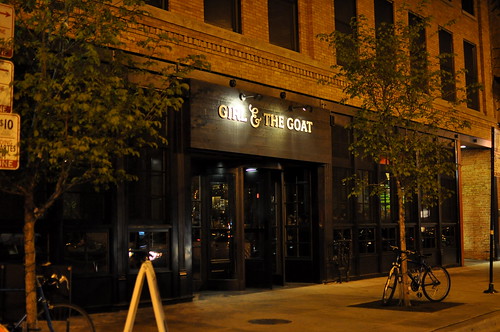 A meal at Chef Stephanie Izard’s Girl & the Goat was an absolute must on my culinary tour of Chicago. I first tasted her cooking late last year at the Food & Wine All-Star Weekend in Las Vegas. She prepared a hiramasa crudo with pork belly for an event called “A New American Lunch” and an especially memorable spicy goat curry for the grand tasting. Chef Izard makes the kind of bold and exciting food that I love to eat, and I couldn’t wait to do so on her home turf. 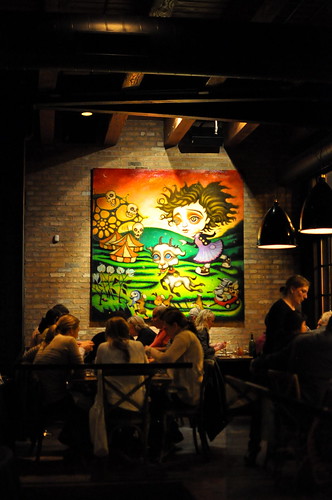 Girl & the Goat has been booked solid ever since it opened two summers ago. I tried and failed to snag a reservation a few weeks before our trip, so our party of four prayed for a miracle when we walked in at dinnertime on a Saturday night.

We were seated sometime past 10 PM and wrapped up our dinner around midnight. It wasn’t the most ideal situation, but we rolled with the punches and were rewarded with a stellar feast. 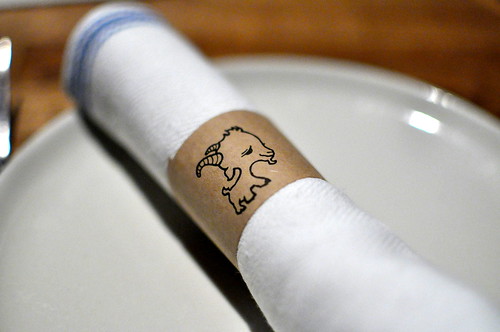 The menu here is divided into three categories: Vegetable, Fish, and Meat, with a separate specials menu full of goat options. The restaurant goes through seven whole goats each week, all of which are grown and raised locally. “Izard,” by the way, is a breed of Pyrenees goat. Hence the chef’s fascination with the animal. 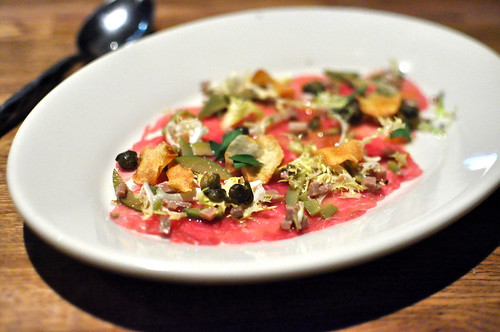 We took our waitress’ advice and ordered two to three plates per person. While The Astronomer and I chose some of the more daring items on the menu, Kellie and Mike rounded out our spread with meaty standbys.

The first dish to hit the table was a goat carpaccio ($12) with capers, olive vinaigrette, and smoked roe. The thin slices of raw goat were mostly mild and not the least bit assertive like their cooked counterpart. We were hoping for a more distinct flavor profile, but alas, it was what it was. 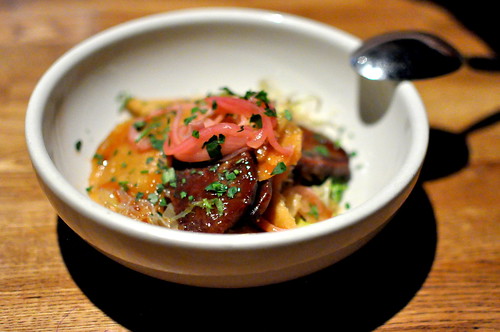 Our waitress described this next dish, braised beef tongue with masa and salsa verde ($14), as a deconstructed lengua taco. Her assessment was spot on. The soggy squares of  tortilla, soaked in tongue drippings and a vinaigrette, were my favorite. 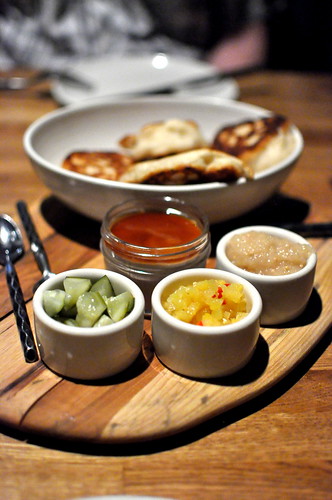 The goat liver mousse ($11), with its adorably plated accompaniments, was nothing short of awesome. Served alongside the smooth and pleasingly funky spread were freshly baked crumpets, pickles, smoked pear and spicy pineapple relish. 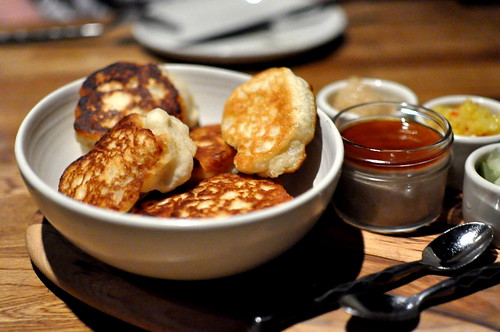 While I liked the the mousse quite a bit, it was the warm and crispy-edged crumpets that stole the show. Crumpets make a fine vehicle for sweet, savory, and musty. 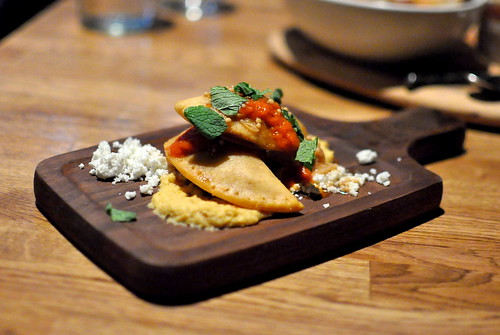 Also from the “Goats” section of the menu were smoked goat rillette empanadas ($16) with romesco, marinated goat feta, and hummus.  My affair with crumpets and liver mousse kept me from stealing a bite of these, but my friends and dear Astronomer found them to be a solid effort. 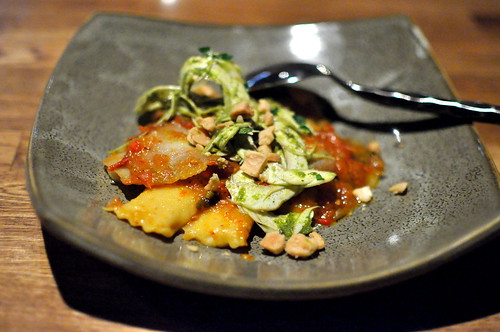 The artichoke heart sofrito ($13) from the “Vegetables” portion of the menu was gloriously saucy and minimally virtuous. The plump and rich marcona almond-goat cheese agnolotti were the highlight of the plate. 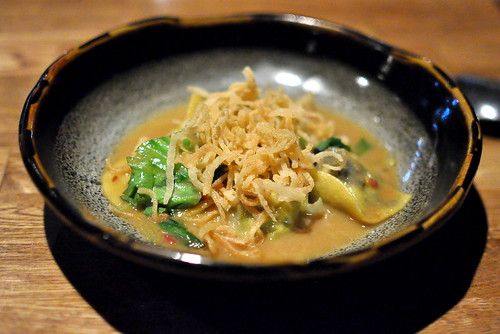 I’m pretty sure I went into my own little world when the escargot ravioli ($15) with bacon and tamarind-miso sauce arrived. Using a big spoon, I made sure that every bite of snail-stuffed pasta was delivered with plenty of the sweet and tangy sauce and a pinch of the crunchy bits too. 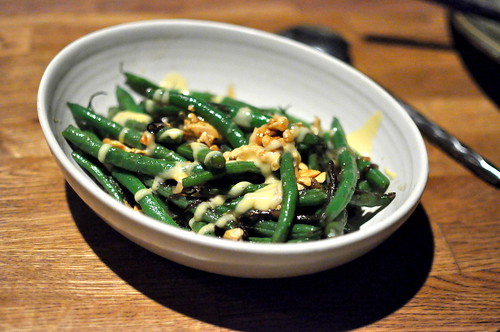 Also from the “Vegetables” section were sauteed green beans ($9) with a fish sauce vinaigrette and cashews. Just like the artichoke hearts, these were gloriously saucy and minimally virtuous. Vegetables go down nice and easy at Girl & the Goat. 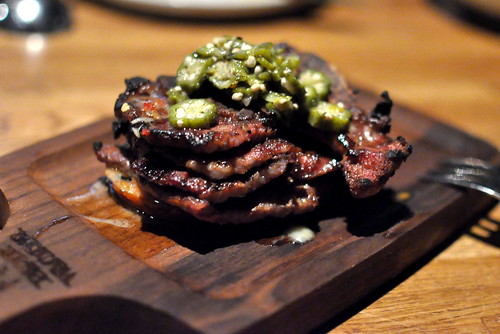 I was running out of gastro-real estate by the time the duo of meaty morsels arrived, so Kellie and Mike handled these like champs. The kalbi-style beef ribs with grilled sweet potatoes and charred okra ($16) were well-received… 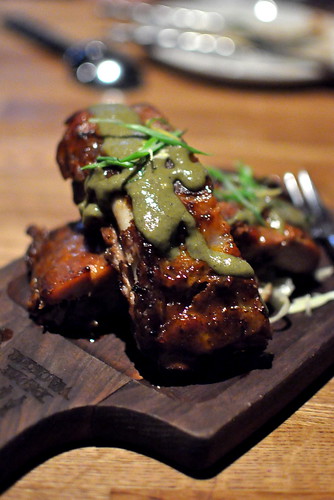 ….as were the grilled pork ribs with  tomatillo-mushroom slaw and grilled scallion vinaigrette ($15). These two dishes made our less-adventurous friends smiley and happy diners. 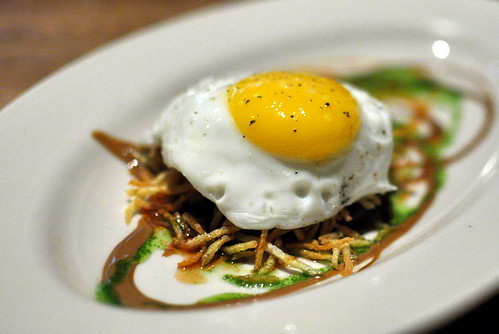 The final plate of the night was the restaurant’s signature wood oven-roasted pig face ($16) with a sunny side egg, potato stix, tamarind vinaigrette, and cilantro oil. The flavors were reminiscent of breakfast time, with the scrapple-like patties made from seasoned head meat soaking up the yolk and sauces. It was a delicious mess. 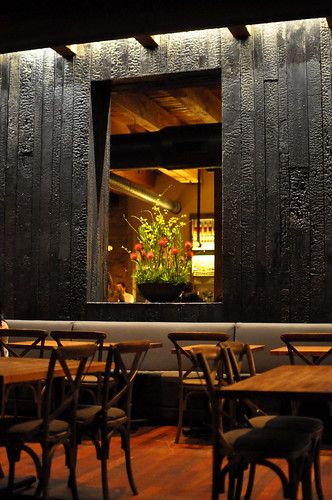 Ordering two to three plates per person ended up being too much food for us, which unfortunately meant that we had no space left for dessert. Next time, the butternut malasadas with boubon gelato, brown butter apples, and cheddar will be mine.

Chicago is hungry for small plates and big flavors delivered in a boisterous room, and Girl & the Goat delivers on all fronts. The food and spirit of the place is contagious—I’d wait another two hours to eat here again.