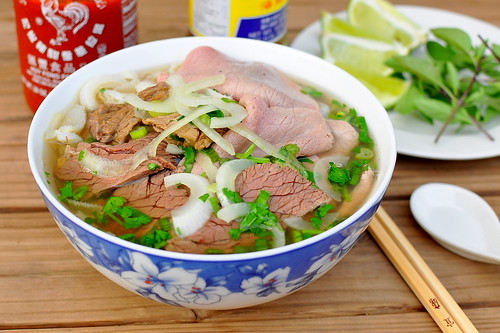 During my visit to San Diego this past Mother’s Day, Ba Ngoai taught me how to make pho bo from scratch. It was a two day affair, one day dedicated to purchasing groceries and another to preparing the soup. Shopping and cooking on the same day is an exhausting endeavor for a senior citizen, so I was happy to divide the tasks in order to finally conquer Vietnam’s most iconic noodle soup.

The leg bones that we had procured the day before were soaking on the stove when I arrived at her house on Sunday afternoon. She switched the flame on high soon after, parboiling the limbs to get rid of impurities. Next, she instructed me to turn off the heat, grab ahold of the pot, and follow her into the backyard. I wasn’t sure what was going on, but what Grandma says goes in my family.

In the backyard, we dumped the scummy water into a ditch of sorts that my grandfather had constructed for this very purpose, making sure not to lose any bones in the process. We then squatted Saigon-style, turned on the garden hose, and rinsed each nub under cold water. It seems that Grandma has a fear of clogging up the kitchen sink, hence this unorthodox, old world technique. After the bones had been thoroughly cleaned, we brought them inside the kitchen and proceeded to make the broth.

When it came time to char the ginger and onion, ingredients essential for perfuming and coloring the soup, Grandma reached into her bag of tricks once more and employed a beat up tin can that was once filled with bamboo shoots. The can’s tight and intensely hot compartment yielded an evenly charred onion with neither fuss nor mess. Grandma’s kitchen genius knows no bounds.

The recipe that follows for my grandmother’s pho bo has been adjusted ever-so-slightly to reflect the sensibilities of modern cooks like myself. While I’d love to have a drainage ditch dedicated to soup scum in my backyard, our current one-bedroom in Pasadena doesn’t allow for such luxuries. Additionally, I’ve swapped out the tin can for a flame-licked grill in order to char the aromatics. While I finessed some of Grandma’s cooking techniques, the soul and flavor of her pho hasn’t been fiddled with one bit. After all, perfection shouldn’t be messed with.

I had an incredible afternoon shadowing Grandma and learning how to construct a well-balanced and deeply satisfying pho. I hope you can taste the love.

For toppings and garnish 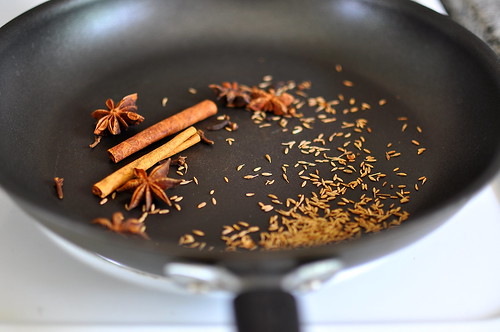 Dry roast the star anise, cumin seeds, cloves, and cinnamon sticks in a non-stick skillet over medium heat until fragrant. Set aside to cool. 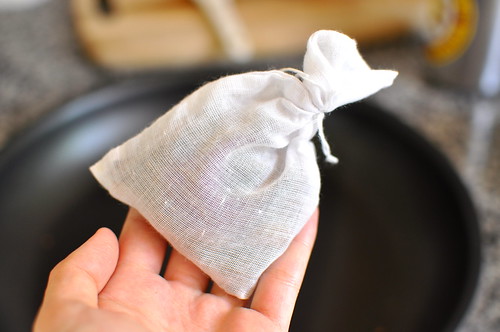 Once the spices have cooled, transfer to a muslin spice sachet and tie the bag closed tightly. 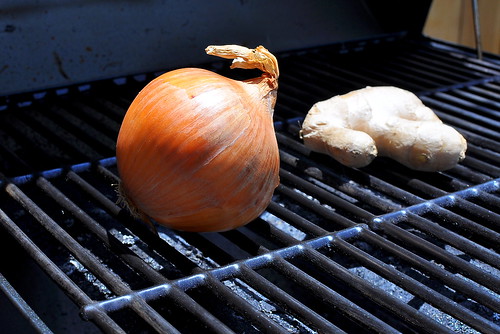 Heat a barbecue grill or char gill pan over high heat and grill the unpeeled onions and ginger evenly until all sides are blackened, approximately 45 minutes. 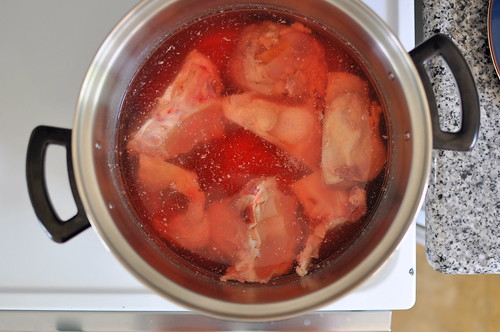 While the onion and ginger are blackening on the grill, begin preparing the stock. If time permits, submerge the bones in cold water and soak for 1 hour, then drain.

Otherwise, place the bones in a large stockpot. Fill the stockpot with enough water to cover the surface of the bones and bring to a boil. The bones will have some impurities that need to be washed away, so once the water has boiled for 2-3 minuets, discard it and collect the bones in a colander. One by one, rinse the bones to remove any scum. The cleaner the bones are, the clearer the broth will be. 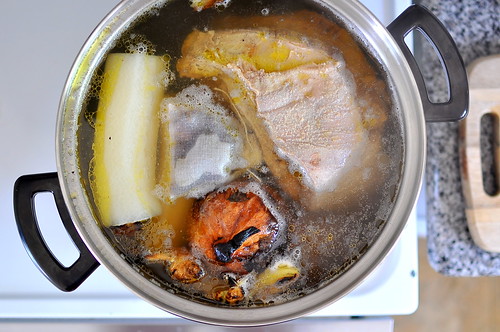 After giving the stockpot a thorough cleaning, fill it with 8 quarts of water and bring to a boil along with the bones, daikon, beef plate, and 2 tablespoons of salt. Skim the foam and fat off the surface as needed using a fine mesh skimmer.

Place the onion and ginger into the broth after they have been properly charred—give the ginger a few good whacks with the side of a cleaver to split it first. Add in 3 tablespoons of sugar, as well as the spice sachet.

Next, lower the heat to medium-low and bring all of the ingredients to a gentle simmer (such that you see a few small bubbles breaking the surface every few seconds) and cook for 3 to 4 hours, skimming off any fat or foam that rises to the surface. If the broth reduces too much, add additional water.

When the beef plate is tender (after 3-4 hours), remove it from the broth and submerge it in a bowl of cold water for five minutes. This will keep the meat from discoloring.

Finally, season the broth with the remaining salt, fish sauce, sugar, and monosodium glutamate if using. The broth should taste just a touch saltier than one would expect to desire because the noodles and garnishes aren’t seasoned for the most part. 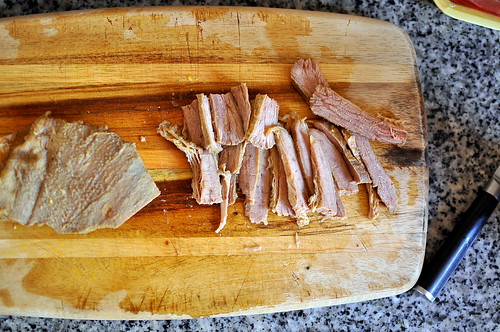 Drain the beef plate and slice it in 1/4″ thick slices. Set aside. 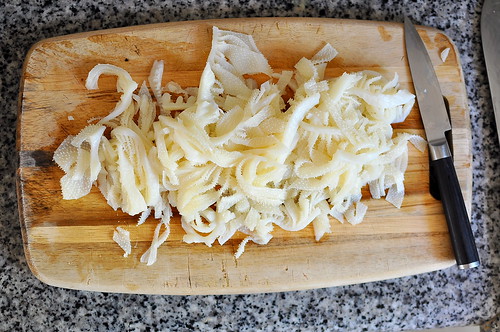 For the tripe, bring water to a boil in a medium-sized sauce pan. Add the tripe to the boiling water and bring to another boil, approximately 4 minutes. Drain the tripe and run under cold water. Slice thinly and set aside. 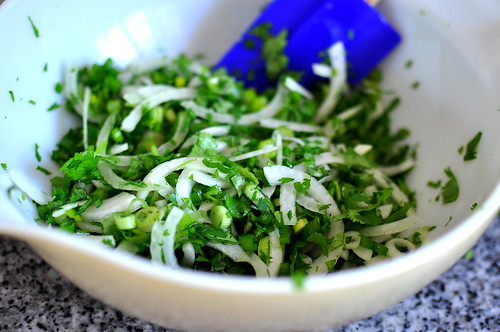 Combine the scallions, cilantro, and onions and set aside. 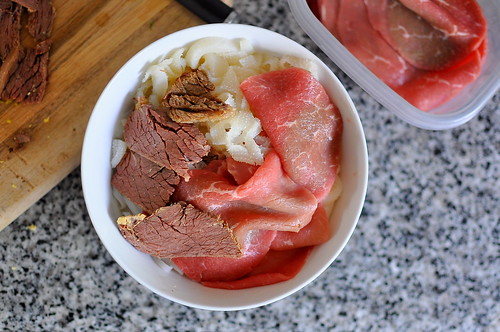 Place a portion of noodles in each soup bowl and garnish with tripe and slices of the cooked beef plate and thinly sliced raw beef. Ladle the hot stock over the noodles and beef just before serving. 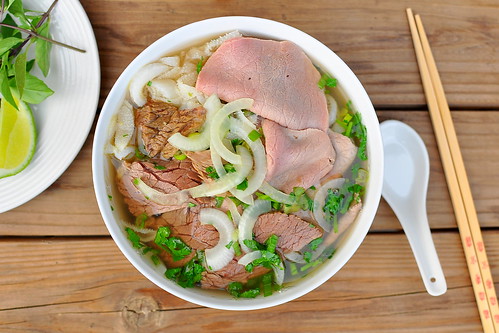 Garnish with the onion and cilantro mixture and a pinch of black pepper. At the table, add in bean sprouts, herbs, and a squeeze of lime. Dip the meats in hoisin and chili sauces for extra pow.

More Vietnamese noodle soup recipes from my family to yours: