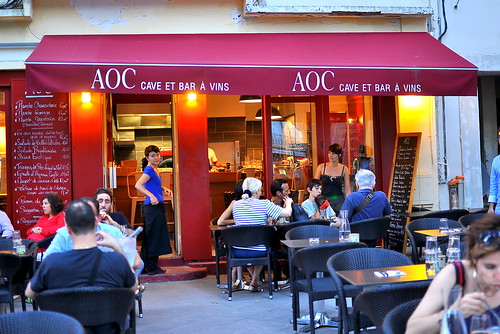 Of all the restaurants that we had the pleasure of visiting while in France, I would be most thrilled if AOC expanded stateside. Tucked into a quiet courtyard in Avignon, this wine bar offered everything that I could ever want from a restaurant. The service was helpful and efficient, the al fresco seating couldn’t be beat, the wines and food were priced just right, and let me tell you about their beef tartare…

I was crushing so hard on AOC after our meal here that we gave it another go the following evening. It’s the only restaurant of the trip to have had the distinction of being visited twice. 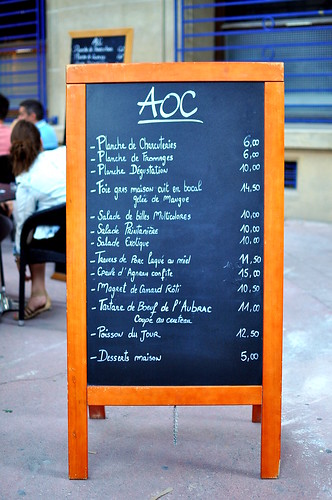 The French certification granted to certain French geographical indications for wines, cheeses, butters, and other agricultural products, all under the auspices of the government bureau Institut national des appellations d’origine, now called Institut national de l’origine et de la qualité (INAO). It is based on the concept of terroir. 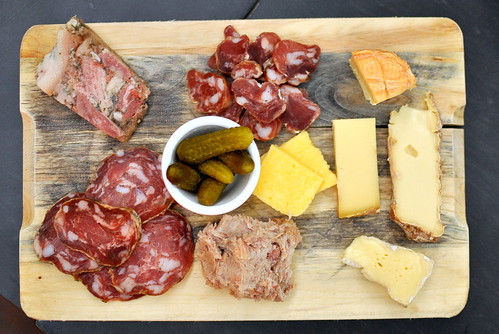 I was putty in AOC’s hands as soon as this plank of house-made charcuterie and cheeses arrived. There were heaps of pork rilettes, a slice of gelatinous headcheese, thick cuts of salami, and beautiful cheeses of all stripes—stinky, runny, blue, hard, and creamy. Best of all were the sausages embedded with Roquefort! Served in tandem with this spread to shame all other spreads were snappy cornichons, salted butter, and bread. This, paired with several glasses of chilled white wine, was pure heaven. 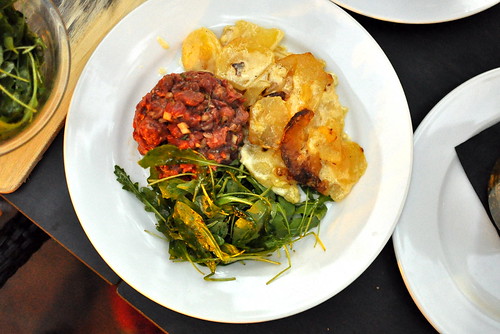 And speaking of divinely delicious dishes, the hand-cut steak tartare, as well as the au gratin potatoes served with it, were nothing short of otherworldly. The roughly chopped beef, punctuated by pickled shallots and coated in rich egg yolks, was perfectly seasoned. Its flavors and textures had me completely smitten. The potatoes were equally special. Tenderly baked in plenty of cream and butter, the silky spuds melted in our mouths, except for the crisp and caramelized edges—those we savored a little longer. 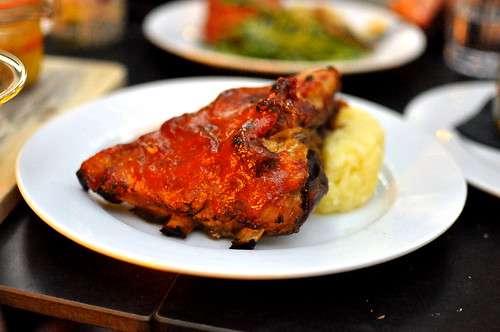 Also on deck was a platter of pork ribs slathered in a honey-ginger barbecue sauce. Who knew the French were down with ‘cue? 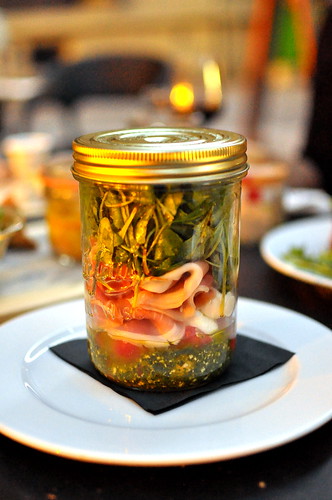 The pesto, prosciutto, and tomato salad arrived in a jar. 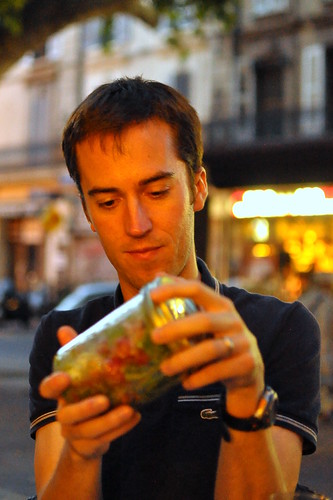 The Astronomer shook the jar real good before spilling its contents onto a plate. Every ingredient was evenly coated in dressing. Genius. 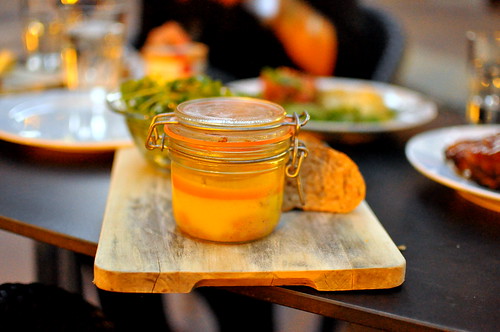 And finally, a foie gras terrine with mango gelee. A sure sign that this feast was truly extraordinary was the fact that we didn’t finish the entire jar. It’s not every day that one encounters a spread so stupendous that foie gras finishes in third. 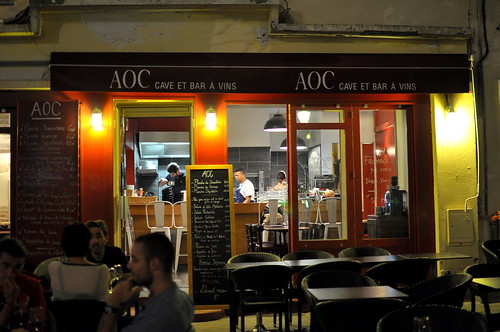 We returned to AOC the following evening to revisit some of our favorite dishes from the night before. Once again, we opted to dine under the stars. 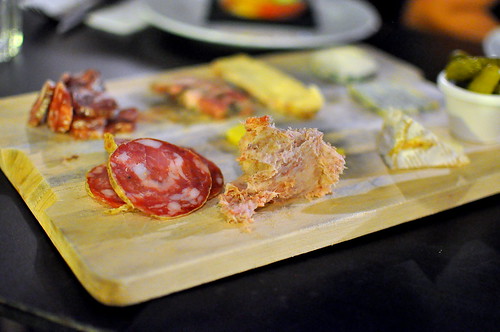 The planche degustation was as insanely awesome the second time around as the first. Camembert is my homie. 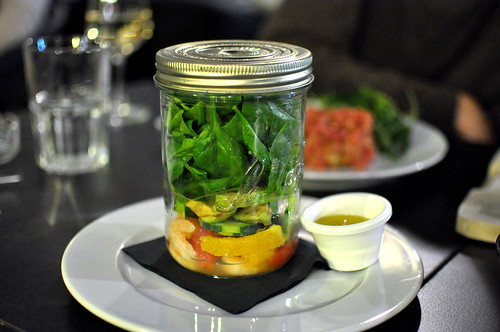 For the sake of getting some vitamins in our systems, we ordered another salad in a jar. This one contained mozzarella, spinach, tomatoes, cucumbers, shrimp, oranges, and watermelon. A few shakes and we were ready to dig in. 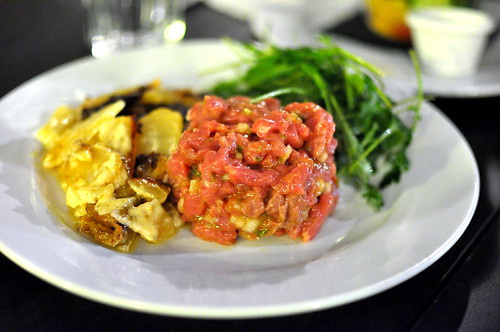 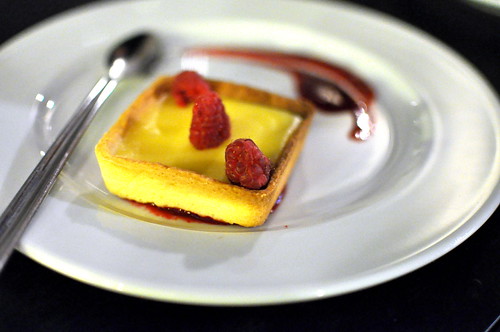 We saved room for dessert on our second visit. The Astronomer chose the lemon tart… 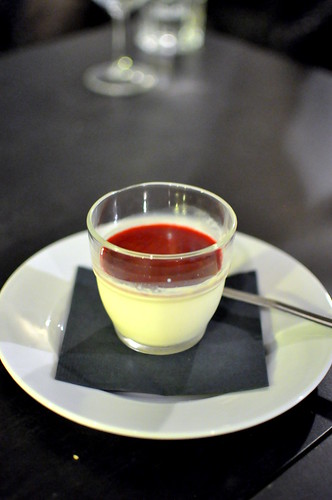 …while I settled on the panna cotta with raspberry sauce. Both were fine, but compared to the dishes that preceded them, they were very much forgettable.

The roads that lead to my heart are lined with charcuterie, cheese, and steak tartare.