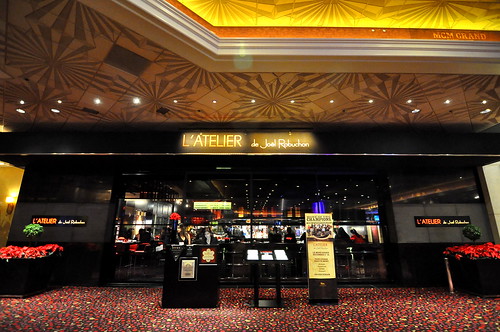 Joël Robuchon, where have you been all my life?

Just one evening spent under the Chef of the Century‘s spell and I am utterly smitten; I can’t believe it’s taken me this long to make my way to one of his world-class restaurants. 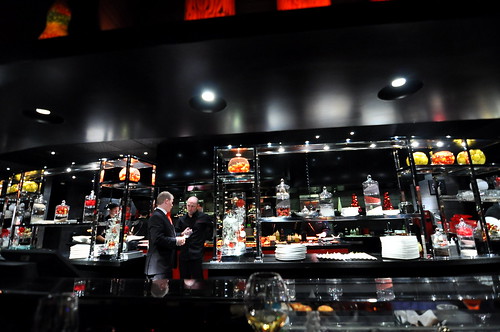 Located a stone’s throw from MGM Grand‘s expansive casino floor, L’Atelier de Joël Robuchon is one of only two Joël Robuchon establishments in the U.S.  The other, Joël Robuchon Restaurant, is located next door and offers a more formal dining experience.

The L’Atelier’s space is positively sumptuous, swathed in glossy blacks and heady reds. Best of all is the open kitchen with court-side seating that allows diners to watch their feasts being prepared. It’s amazing how quietly each cook works and how calmly direction is given—Hell’s Kitchen this is not. 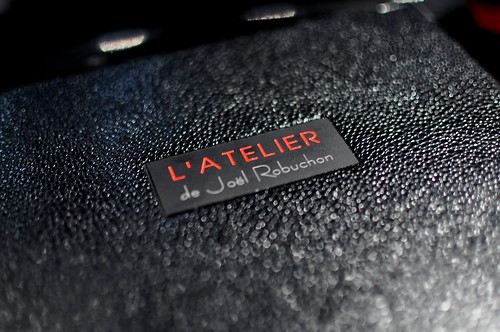 The menu here allows for quite a bit of freedom. One can simply order a la carte from the “tapas” menu, construct an abbreviated tasting menu of four ($78) or five ($105) courses, or go all out with the Seasonal Discovery Menu ($165).

The Astronomer curated a fabulous five-course menu perfectly suited to his tastes and appetite, while I couldn’t resist the “Menu Decouverte De Saison.” Sommelier Ben Spicer ran the “front” of the house during our visit, and we could not have had a better time under his care. 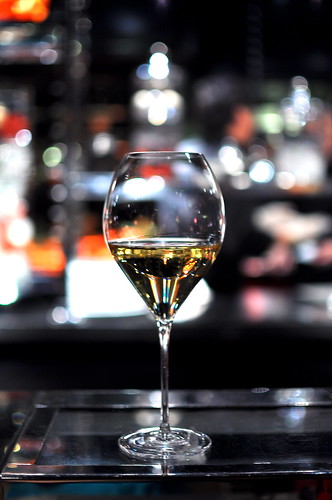 First up, a pour of Veuve Clicquot. Vegas, baby! 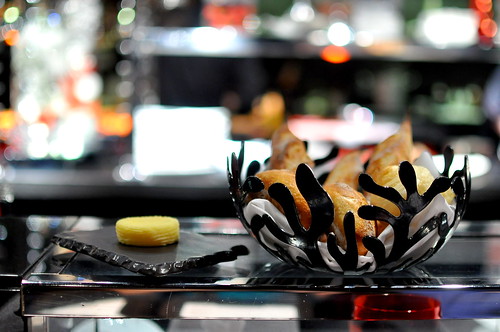 Next to arrive were beautiful, house-made loaves paired with hauntingly good butter. 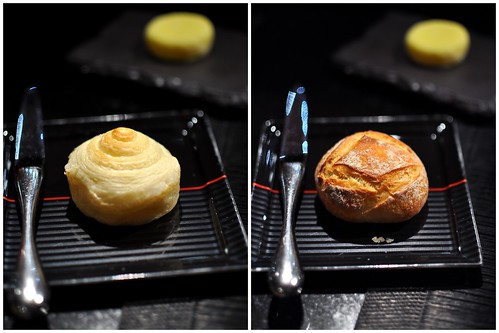 With many courses to come, I limited myself to two varieties. One was buttery and flaky like a croissant (left), while the other had a crust you could really count on. Both were perfect. One day, I will conquer the bread cart next door. 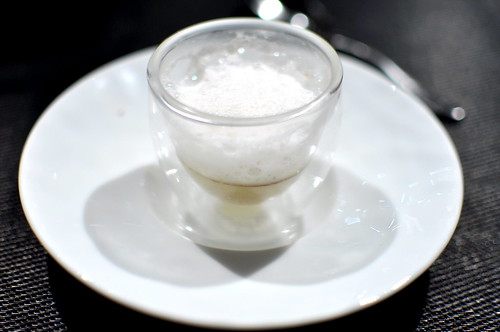 Even though The Astronomer and I ordered two different menus, we were both presented with the same amuse bouche: a foie gras parfait with port wine and parmesan foam.  A whisper of richness in a sea of savoriness. 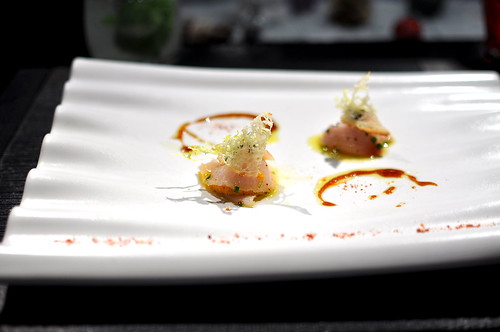 Following the amuse bouche were cool slices of hamachi that “served as a ravioli,” according to the menu. Sea urchin made for a fabulous “filling,” while a lemon vinaigrette tied everything together. Light and  flavorful, this course left me wanting more. 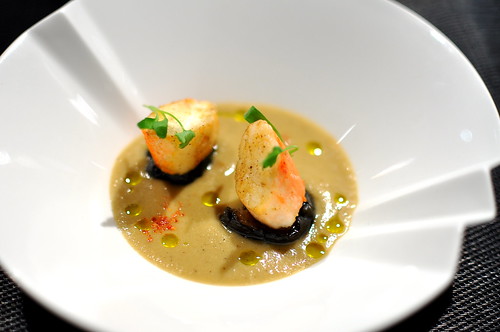 Next up was a spiced eggplant soup punctuated by huge hunks of roasted King crab. The warm, curry-tinged broth cradled the sweet meat beautifully. 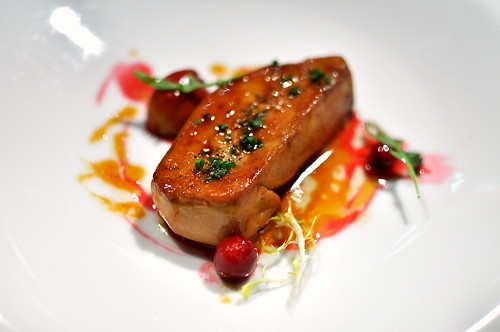 The seared duck foie gras with black pepper and sweet and sour grapes was spectacular. While I usually prefer foie gras prepared in a smooth and creamy torchon, this warm preparation was expertly balanced and just rich enough to send my taste buds into overdrive. 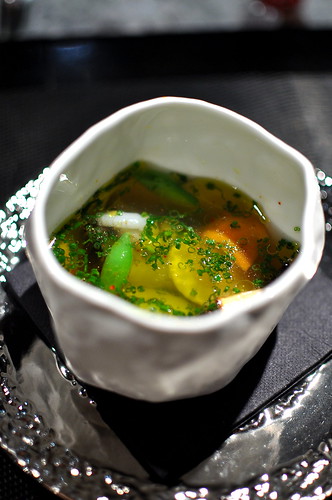 To counter the previous course’s onslaught of unctuousness: a warm matsutake bouillon with gingered leeks and a carefully poached quail egg. The flavors were pure, clean, and welcomed. 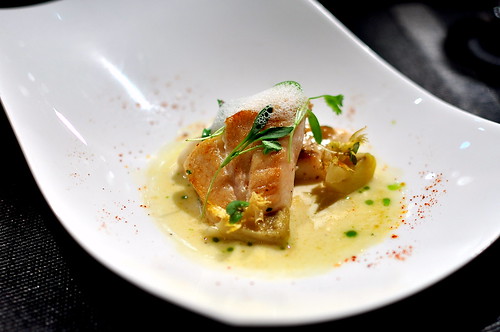 A simple preparation of John Dory served over artichoke hearts “en barigoule” was the next to arrive. This dish didn’t have the bells and whistles of the preceding courses, but it definitely hit a delicious note. 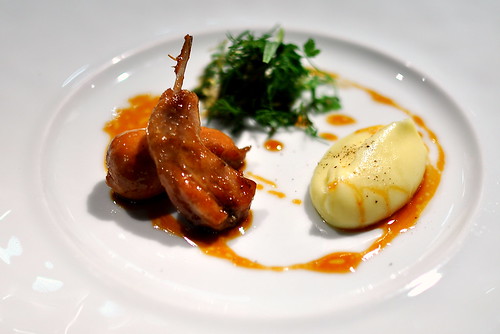 The final savory course was quite possibly my favorite of the night—caramelized free-range quail stuffed with foie gras and served with Joël Robuchon’s famous mashed potatoes. ‘Nuff said. 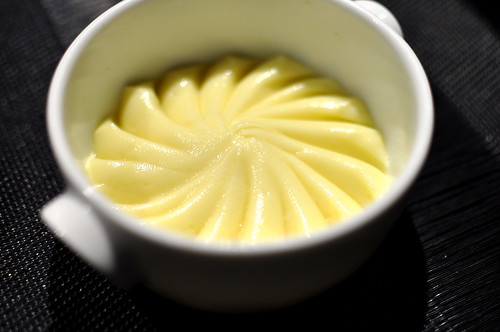 As a bonus, The Astronomer and I received an additional serving of the purée de pomme de terre. In case you’re curious, the ratio of potatoes to butter is two to one. Pure decadence. A must. 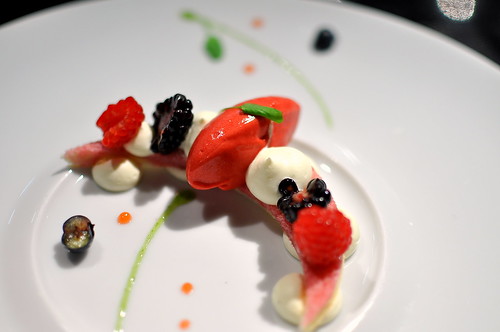 To finish, a duo of desserts. The first consisted of raspberries, blueberries, vanilla cream, chiffon cake, and raspberry sorbet. This straightforward plate of berries and cream was totally my speed. 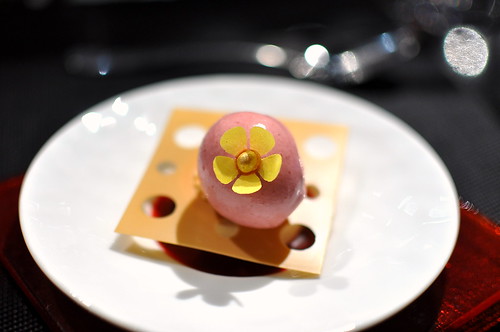 And finally, chocolate fondant with dulce cream and cherry sherbet. It was almost too beautiful to eat, but I somehow managed to clean my plate.

Now, on to The Astronomer’s choose-your-own-adventure dinner… 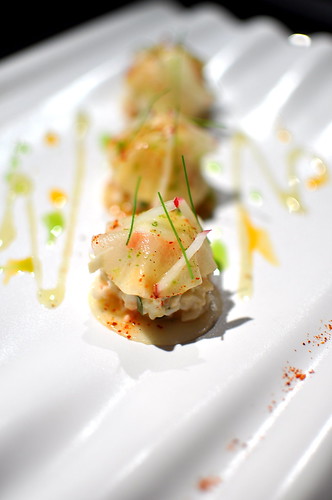 Following the amuse bouche was King crab served on a turnip disk with a sweet and sour sauce. The accouterments were just subtle enough to allow the delicate crab meat to shine brightest. 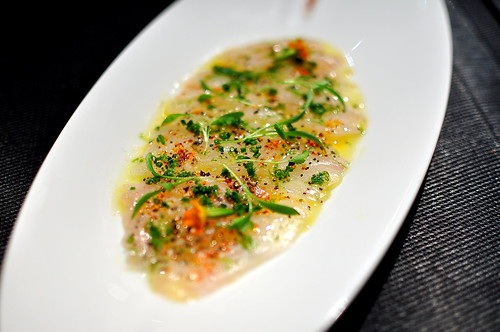 Equally refreshing was the snapper carpaccio with a lemon vinaigrette, poppy seeds, and Espelette pepper. This dish was as delightful to eat as it was to behold.

The two light and bright seafood dishes were followed by a double punch of proteins. The spiced duck, superbly cooked, was served with sweet and sour daikon and young leeks. I stole more than my fair share of bites off of The Astronomer’s plate. 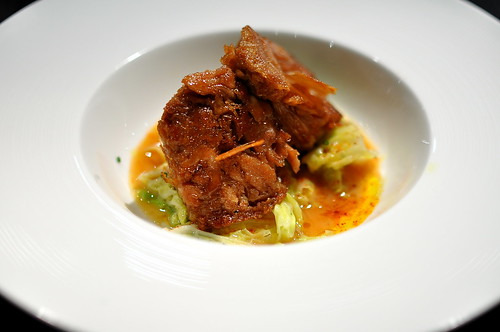 Even more indulgent was the suckling pig confit—caramelized and crisp on the outside and tender within.  The pork’s richness was reeled in nicely with ginger-spiced sauteed cabbage. 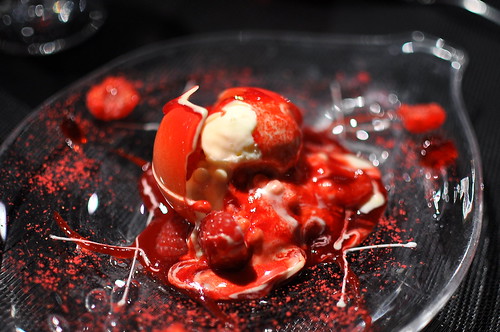 The Astronomer’s raspberry-centric dessert hit it out of the ballpark. While I didn’t manage to get a shot of the white chocolate sphere before it melted into a puddle of yuzu ice cream and raspberry puree, I assure you that it was a beauty. This creation was a raspberry lover’s dream. 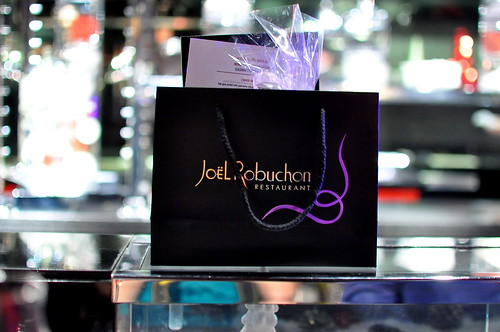 Pastry Chef Salvatore Martone sent us on our way with a magnificent panettone that I mauled on the drive home.

I’ve lost some of my enthusiasm for fine dining over the years, but my evening at L’Atelier reminded me just how pleasurable and downright fun it can be when executed just right—standout food paired with wonderful service. Now that I’ve experienced the magic of Joël Robuchon, all future trips to Vegas won’t be complete without a stop here, even if it’s just for le burger or something sweet. Hats off!