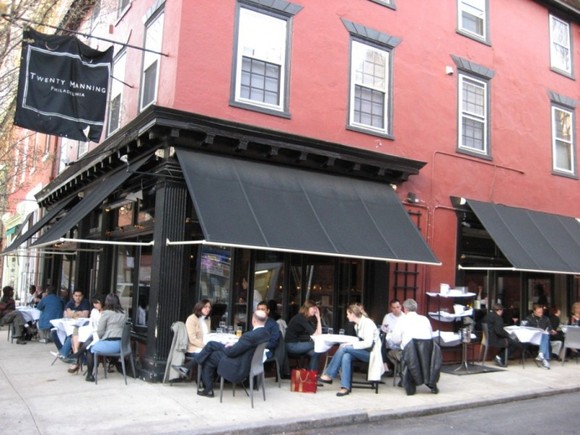 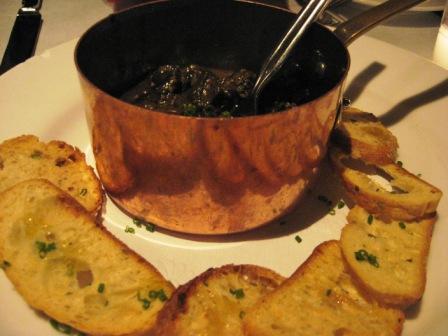 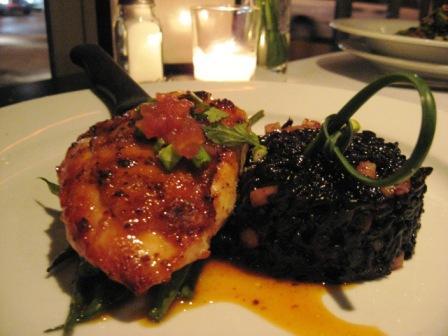 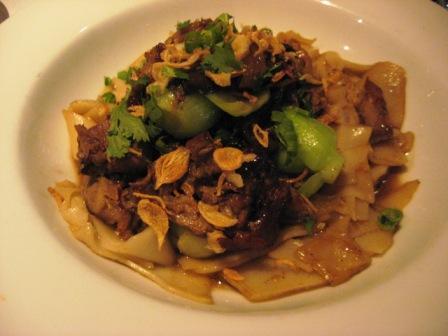 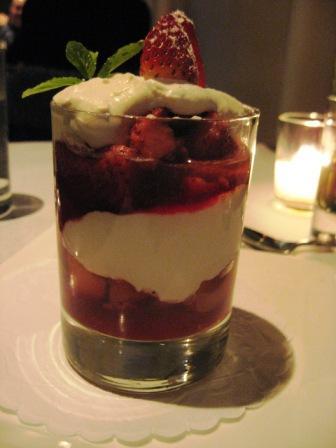 Lovely meals at Audrey Claire inspired the Astronomer and me to try Twenty Manning. Both restaurants are owned by the same restaurateur—Audrey Claire Taichman. The dining room at Twenty Manning is perfectly modern with dark wood floors and big windows looking out onto the street. Each table is accented with candles and miniature pots of bright green grass. The Astronomer and I were seated at a cozy table by the window.

Much too soon after we placed our orders, our appetizer arrived. The Escargot Fondue was presented in a copper pot filled with crimini mushrooms and a mouth watering wine sauce. The baguettes were thinly sliced and toasted with olive oil and chives. While we were expecting some dipping action a la “fondue,” there was less dipping than the menu description implied. In any case, I really enjoyed this dish. The earthy mushrooms and red wine worked wonderfully with the surprisingly delicate snails. The Astronomer liked the appetizer as well, but prefers his escargot more traditionally prepared with butter and herbs like at Le Bec Fin and in France. 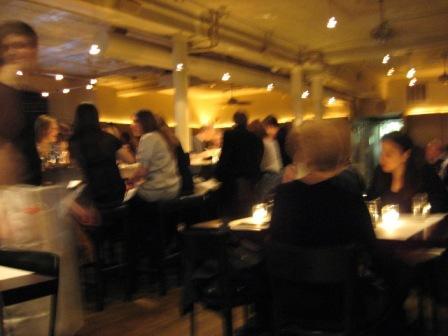 The appetizer was brought out so speedily that the starter bread course came after (sigh). We were offered a choice of sourdough, multi-grain, or French baguette. I chose the baguette, while the Astronomer chose the sourdough. We each had multi-grain during our second round of bread later in the meal. The breads were accompanied by a wasabi cream cheese. All of the breads were good with hearty crusts and moist interiors and the cream cheese was excellent—I really liked the jolt from the wasabi.

Unfortunately, the tasty appetizer and breads were overshadowed by the poor service. To make matters worse, our entrees arrived before our appetizer dishes were even cleared! Timing is everything and Twenty Manning was completely off this evening.

I loathe feeling rushed, but wanted to give the food a fair shake. I ordered the Peking Duck Pappardelle. The word Pappardelle should have been in quotations because what arrived was chow fun (flat rice noodles). I could not help but feel disappointed; if I had wanted chow fun I would have headed to Chinatown. Expectations aside, the “Pappardelle” was really good. The roasted Peking duck was fabulously spiced and the perfumed star anise tied together the entire dish. The fried onions and cilantro reminded me of Vietnamese banh cuon.

The Astronomer had the Grilled Free-Range Chicken. The skin was left on the chicken breast and the glaze was brushed lightly on top. The Astronomer liked the glaze, but could not make out a distinct mustard taste. The black rice, which was similar in texture to sticky rice, was the highlight of his entrée. The rice was cooked in a savory broth and accented with little bits of pineapple.

Since we did not order our dessert until we were through with our entrees, it arrived at a more leisurely pace. Thank goodness. The Astronomer loves berries and chose the Strawberry Shortcake. The strawberries were delightfully fresh (although most likely from Chile) and the pound cake was full of buttery/nutty goodness. The layers of whipped cream, cake, and berries more closely resembled a trifle than a traditional strawberry shortcake, but I am all for unique interpretations.

I hope that the hurried service we received during our meal was a glitch because Twenty Manning offers solid cuisine and superb ambiance.

One thought on “Twenty Manning – Philadelphia”